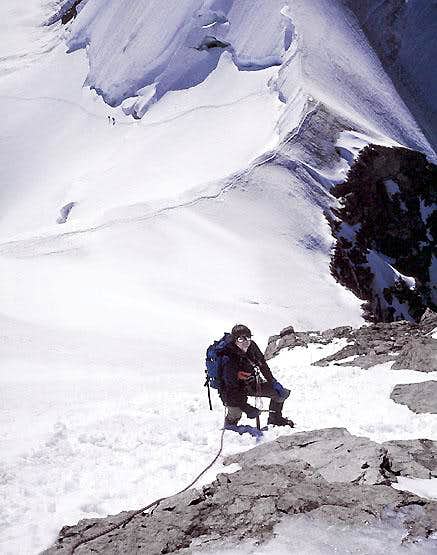 On the Southeast Ridge of the Jungfrau. The Rottalsattle is below and two climbers can be seen on the traverse from the Kranzbergegg to the Rottalsattle.
Photo taken 30 August 1985 by Fred Spicker.
« PREV NEXT »

As always a great picture! You deserve to be on the front page more.

Seeing this photo Fred reminds me of what I should have been doing at the end of July this year. I had spent a week based at Lauterbrunnen doing some hiking in the area. I had signed up with Hano Tschabold of Swiss Alpine Guides who are based in Wilderswill near Interlaken to climb the Jungfrau. However Hano was getting reports of bad conditions due to the very hot weather they have experienced this year. Amongst other things the ascent to the summit from the Rotalsattel was sheet ice which would have meant a lot of front pointing. Perhaps it was his kind way of telling me I was not quite up to it. But there was no denying the hot summer has taken its toll on many of the previously permanent snowfields.

Fantastic pic of the route

Nice compostion, and good information...best of both worlds.

Fantastic pic of the route

Nice compostion, and good information...best of both worlds.