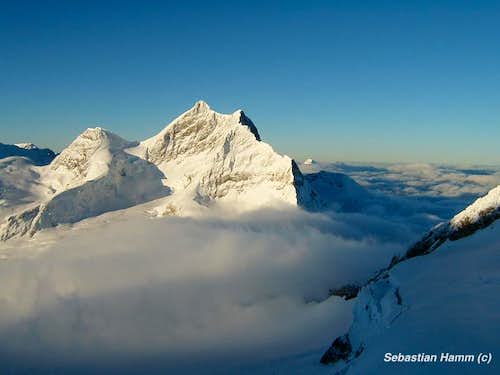 Jungfrau is one of the most well known mountains in all of Switzerland. The Ordinary route to the summit is short and has difficulty level PD -Peu difficile - not very hard. There are passages of snow and ice up to 40° - 50° . Ascent from Jungfraujoch involves 850 meter elevation gain and takes approx 4 hrs. Most climbers spend a night in the cozy and comfortable Mönchsjochhütte (try saying that ten times fast) at 12,000 feet, before the climb. Starting out before daylight, the route crosses the Jungfraufirn, and climbs steep mixed snow and rock to the Rottalsattel, at the base of the summit tower. From here, there is a traverse across a steep snow and ice slope which leads to the easy but somewhat airy rock of the summit ridge.

The Jungfrau (4158 meters, 13,638 feet) is the westernmost and highest of the famous Eiger, Mönch, Jungfrau trilogy. It is a truly high altitude alpine route with an easy approach by train from town.
Jungfrau is a great snowy mountain, a center for tourism in the Bernese Oberland. Its spectacular North Face towers nearly 10,000 feet from the valley below. Jungfrau and its neighboring peak Mönch (4099m) are separated by a col at Jungfraujoch that holds an observatory, a railway station, and hotel. At 3478 meters (11,412 feet), this is the highest point in Europe that is reachable by railway, from which Jungfrau's summit is a short, icy climb up the northeast ridge.

In June 2004 Moni adds: I think it worth saying that although the ordinary route is not difficult, it is sufficiently exposed on the final slope, that one still has to use caution and pay attention. The current warming trend in the Alps has affected this climb as it has many others. 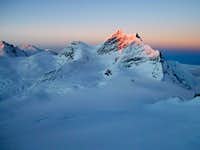 Nearest international airport is in Bern or Zurich. From either location it is a scenic memorable train ride to Interlaken. From Interlaken catch the train to Klein Scheidegg or Jungfraujoch. Trains run frequently and on time. Train travel here is quite easy.
Jungfrau Railway

Also see this Map of Jungfrau Region submitted by Dmiki.

Mid June to end of September are prime climbing times.

From Alpenkalb comes this information on Jungfrau by ski:

From Jungfraujoch take a short downhill on the Jungfaufirn, then climb the Rottalsattel 3885 m), leave the skis there. Take the normal route, the south ridge, to the top. Take rope and crampons with you.

The character of the climb is as varied as the topography. Jungfrau is primarily a snow and glacier climb, and on the sections of rock that are encountered the climbing is enjoyable on solid red and orange gneiss. Jungfrau is usually climbed from the Jungfraufirn on the south and east sides of the summits.
There is a good website that covers climbing packages as well as more information on Jungfrau at Berner Trilogy
I havent used this group to climb but it does seem that they have good information.

Moni adds:
I think it worth saying that although the ordinary route is not dificult, it is sufficiently exposed on the final slope, that one still has use caution and pay attention. The current warming trend in the Alps has affected this climb as it has many others. 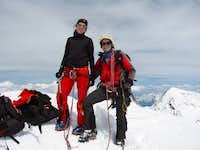 Add your people pics here. Or if you have information about this mountain that doesn't pertain to any of the other sections, please add it here.