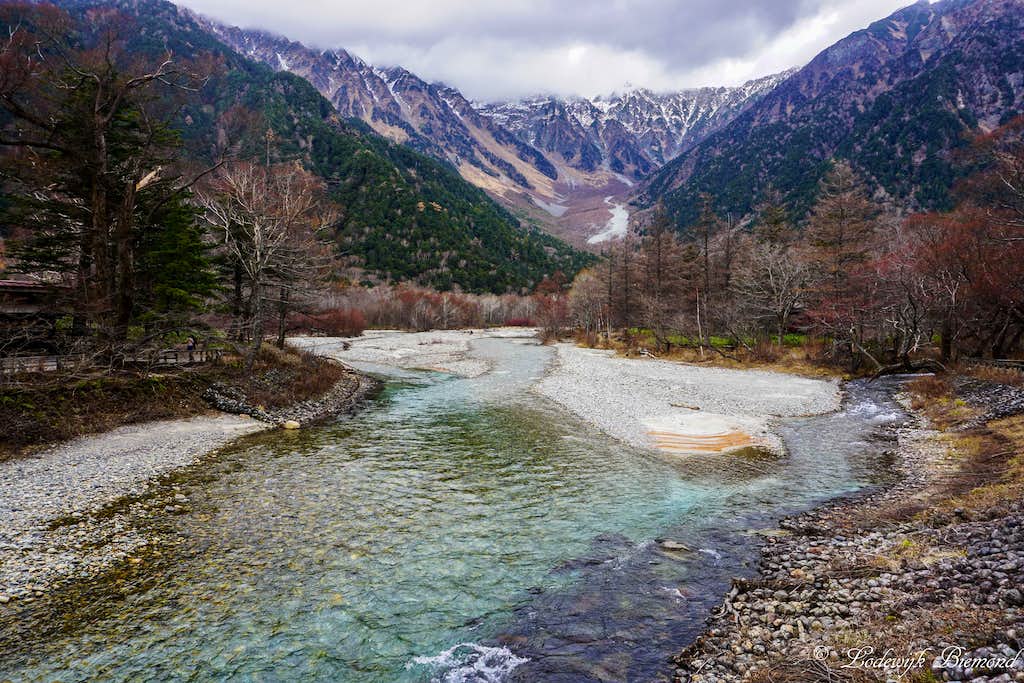 Hotaka Dake (3190m) and the bright colored Azusa river
Kamikochi / 上高地  is a wonderful highland valley located in the heart of the Japanese Alps. When translated, Kamikochi roughly means something like "where gods descend", and I think that says enough already about this amazing place. Kamikochi is the prima attraction of the Chūbu-Sangaku National Park (中部山岳国立公園) and is the perfect starting point for many hikes and climbs in the area. Kamikochi is home to some of the highest mountains in Japan like Yariga Take (槍ヶ岳,3180m) and Hotaka-dake (穂高岳,3190m) and is famous for the bright colored water of the Azusa river. Kamikochi is also home to Macaque monkeys, who can be seen regularly in the valley. Last but not least, Kamikochi has multiple mountain huts, all great starting points for hikes and climbs of the surrounding mountains.

The Kamikochi  valley is about 18 kilometers in length and the altitude varies from 1400 meters (above sea level) in the south  to 1600 meters in the North. Kamikōchi is bordered in the north by Mount Hotaka, and in the south by Mount Yake, an active volcano. The Azusa River flows through the length of the valley and eventually flows into Lake Taisho in the south.  Lake Taishō received its name because it was formed by the eruption of Mt. Yake in 1915, which was part of the Taishō period in Japan.

Kamikochi is located in the Hida Mountain range, part of the Japanese Alps, in the western part of the Nagano Prefecture. It is located west of Matsumoto and east of Takayama. It has been preserved in its natural state within Chūbu-Sangaku National Park. Furthermore, it is designated as one of Japan's National Cultural Assets, and is on the list of Special Natural Monuments and Special Places of Scenic Beauty. It is sometimes referred to as the "Japanese Yosemite Valley."

Because of the relatively flat topography of the Kamikochi Valley, marshes and ponds are a common feature, including the Takezawa Marsh, Tashiro Pond and Myojin Pond. The ponds are  filled either from  snow runoff or underground aquifers (or both), resulting in cold water temperatures, even in summer.

For those who want to climb and hike Kamikochi is a perfect starting point. The most popular mountains surrounding the valley are Yari-ga-take (3180m) and Hotaka-dake (3190m). These two peaks are amongst the highest in Japan and are a popular destination for climbers, especially in the summer months. Actually, Hotaka-dake is the third highest mountain in Japan, after Mount Kita (3195m) and Mount Fuji (3776m).

A popular spot in Kamikochi is, for example, the Taisho Pond. This pond is seen as a romantic place where one can be "lured into the world of fantasy", as the Japanese say. The pond has an amazing view of the surrounding mountains including Hotaka-dake. Also popular is the Kappa bashi (Kappa Bridge). This big wooden bridge over the Azusa river is probably the most photographed spot in the area.

Opposite to the Azusa river and nearby the Kappa bridge is the monument of British missionary Walter Weston. Weston introduced western style mountaineering to Japan and exposed Kamikochi and the Japanese Alps to the rest of the world. Weston was one of the first persons (after Gowland) to use the name ”Japanese Alps”, which became the official name of the mountain range


If you are visiting Japan, visiting Kamikochi is, in my opinion, a must. In the summer months it can get a bit crowded but remember that 90% of all tourists do not go more than 500 meters from the bus stop, so be sure to take your hiking shoes and you will have a great experience in the Japanese Alps. 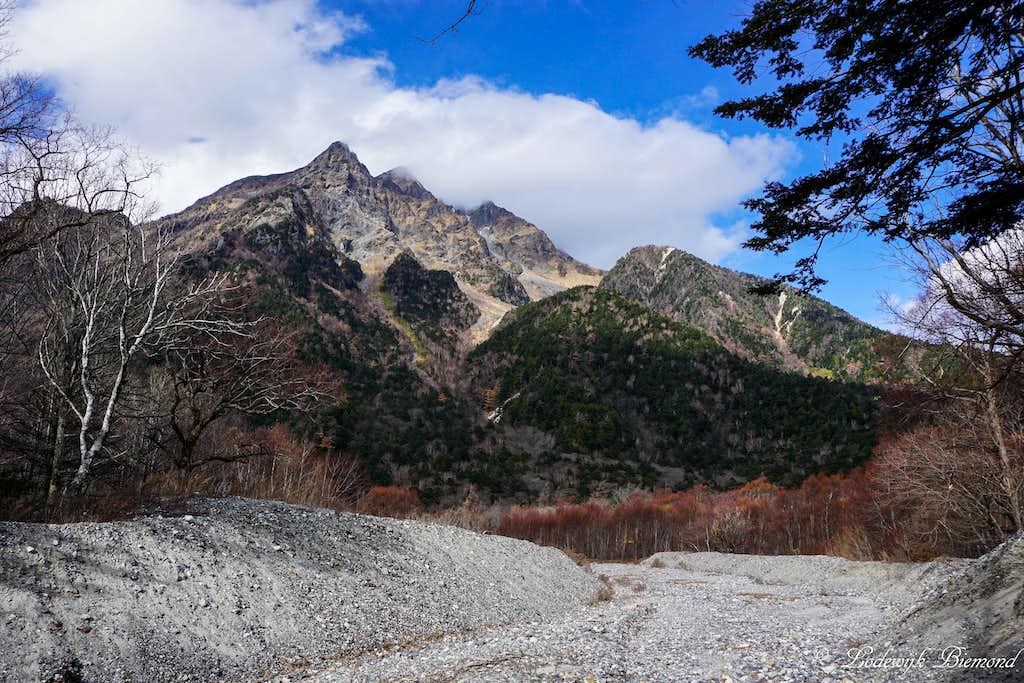 William Gowland, an English goldsmith, was hired, together with a group of western engineers by the Japanese Government. He wrote about his first mountain climbing experience, Climbing Yarigatake, in July, 1877. Gowland was the first ever person to use the term "Japanese Alps" in his article, and it became the common name to refer to the Japanese mountains located in the Nagano prefecture. A couple of years later, an English reverend, Walter Weston, also climbed Yarigatake, and introduced the Kamikochi mountains in his book "Mountaineering and Exploration in the Japanese Alps".

In 1918, the mountain road and trails from Shimashima to Yarigatake were prepared for the visit of his Imperial Highness Prince Higashikuninomiya, who also became a Japanese prime minister in the post war period. After this event, mountaineering became a popular activity in Japan.

Before the Meiji period, only woodsman had accessed the Kamikochi valley. In the Meiji period, Hyakujiro Kamijo was the first to access Kamikochi and he did so in the summer months. He had a cattle ranch in Kamikochi and in other places as well. These pastures offered great views of the snow covered mountains and became popular sightseeing spots among tourists.


After the eruption of Yakedake in June of 1915, the volcanic mud slide dammed the flow of the Azusa River, and created a pond called Taisho Pond. This pond is one of the prime atttractions in Kamikochi to this day.

1927 became a memorable year for Kamikochi . Ryunosuke Akutagawa, a prominent writer in Japan had introduced Kamikochi and its Kappa Bridge in his wellknown novel "Kappa". In July 1927, Kamikochi was chosen as one of the most scenic spots in Japan along with seven other famous spots. In August 1927, His Imperial Highness Prince Chichibunomiya climbed both Hotaka-dake and Yarigatake from Kamikochi, and this news made Kamikochi instantly famous. After this year, the number of tourists in Kamikochi doubledIn 1934, the Kamikochi area became part of the Chubusangaku National Park.

The Kamikochi valley had to be closed in winter due to the Park regulations, and tourist buses carried many visitors to the Kappa Bridge inside the valley. Every year, the numbers of tourists visiting Kamikochi increased, and a traffic regulation was introduced in 1975. According to the present restrictions, tourists are prohibited to visit Kamikochi by car. Visitors can only access Kamikochi by a bus transfer nowadays. There are plans to connect Kamikochi by railway in the near future. 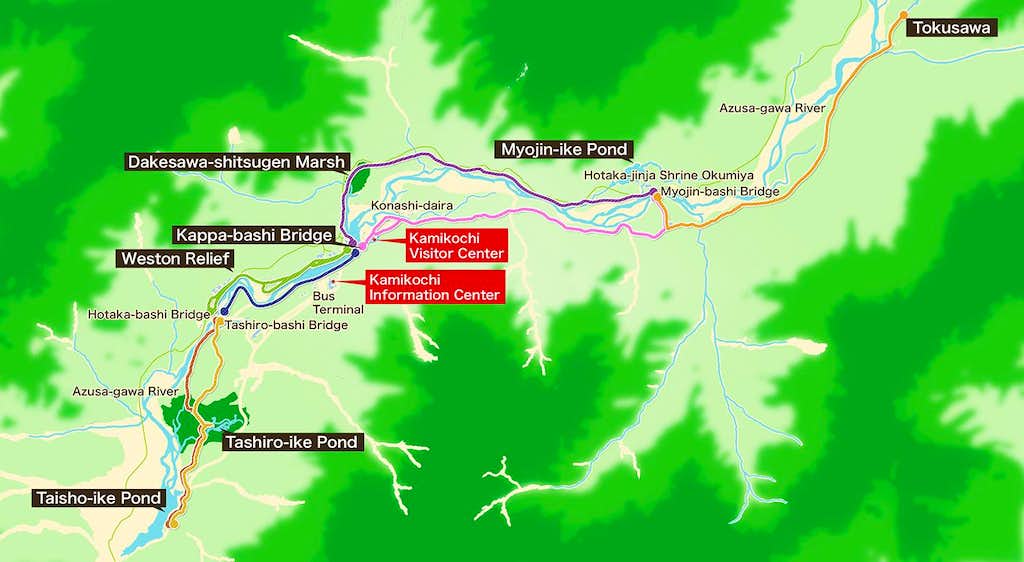 The trail along the Azusa River leads from Konashi-daira to the forest. You should have a view of Mt. Choga-take as you progress along this path. Soon you’ll come across traces of volcanic mud flows at Shimoshira-sawa on the bank of Azusa-gawa River. You’ll see some young plants such as willows and alders restoring the forest. Myojin is a short distance from here.

This trail from Kappa-bashi Bridge passes through the Dakesawa-shitsugen Marsh, and offers views to Dakesawa in front of you. Walk along the Dakesawa stream following the small wooden path/trail through the forest. If you pass through the shrine gate
on the left before the Myojin-bashi Bridge, you will arrive at Myojin-ike Pond, otherwise, if you cross the bridge, you’ll come to the River Left-shore Path and can continue to Tokusawa or go back to the Kappa bridge on the other side of the river.

An enjoyable flat trail through the forest. In early summer it is possible to see large outcrops of wind flowers, also there is an old pond on the way at your left. When the path starts to go along the Azusa-gawa River, you are getting close to Tokusawa.  At Tokusawa,  a campsite is present. The trail is easy (T1/2) and relatively quiet.


Mountains to be climbed

Access by train and bus: Take the Matsumoto Dentetsu Line from Matsumoto Train Station to Shin-Shimashima (30 minutes), followed by a bus ride to Sawando (60 minutes). You could also take a bus to Sawando/Hiraju directly. It is a 90 minute journey and you can meet the bus in front of the Matsumoto bus terminal located across the street from Matsumoto JR train station. The last option is preferable in my opinion. The bus ride goes directly to Sawando/ Hiraju and offers great views of the Japanese Alps. Very recommended! The same direct bus connection starts from the bus Terminal opposite to the Train station in Takayama. From here it is a 75 minute ride to Hiraju, from where you can get a bus or Taxi into Kamikochi.

Access by car: The road to Kamikochi is closed to private cars just below the last tunnel at Sawando. You can park your car at Sawando for 500 yen a day, and catch a bus or taxi into the park. The parking outside of Kamikochi is about 50 minutes by car from Matsumoto JR train station. When coming from Takayama it will take up to 60 minutes by car to get to Hiraju. From here you can take a bus or Taxi into the park.

This website describes all access routes to Kamikochi very well. Be sure to check this if you are planning to go to Kamikochi. 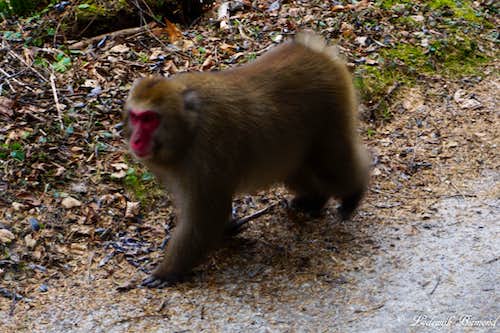 Japanese Macaque monkey
In 1909, a regulation for the preservation of mountain plants was enforced. Since then, Japanese Rock Ptarmigan, Antelope and Char were designated as Precious Natural Animals, and capture of these animals was banned by the regulations.  Kamikochi was also designated as National Park, and a group called "Kamikochi Preservation" was established by local community in 1965. They have been preserving and maintaining the virgin nature of Kamikochi through voluntary activities. Natural environment of Kamikochi completely depends on tourists' manners and their activities.

Kamikochi is closed during the winter months. In 2016 the park was opened from April 15th - November 15th.


Don't Feed & Disturb! Do not disturb or feed birds, insects, fish or other wild animals.


Don't Harm! Do not harm or damage wild flowers and plants.

Don't Dump! Carry all your garbage home with your splendid memories.

Kamikochi Climate Map
Kamikochi is situated at 1400 to 1600 meters above sea level and therefore has a mountain climate. In winter Kamikochi is closed, but in early spring and late August it can get below freezing point in Kamikochi, even during the day. So prepare yourself according to the present conditions. 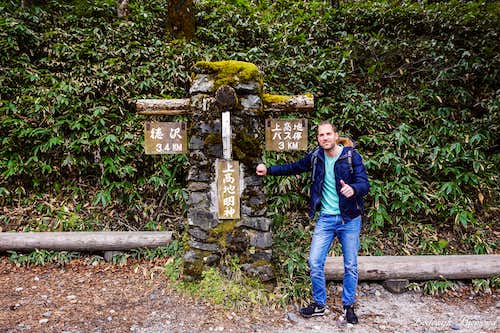