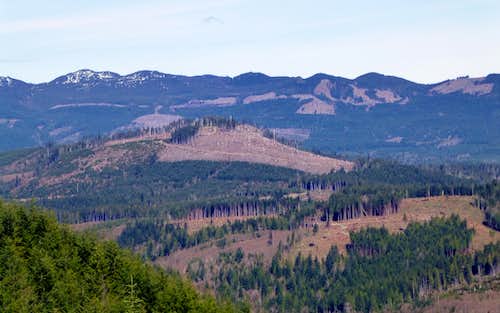 Kinsey Hill from Frailey Mountain
Kinsey Hill? I can just about promise you've never heard of it. Why is that? Because it's a name I just made up a few days ago. I was poking around on Google Earth earlier this week, looking for new places to explore, when I came upon a freshly logged high point north of Lake Cavanaugh. A quick check on listsofjohn revealed that 'Point 2132' had 932' feet of prominence, so I saddled up the mountain bike to go check it out. Deciding that 'Point 2132' was a terribly unimaginative title for the hill I was about to ascend, I went in search of a local who could give me a more appropriate name. The only person I could find informed me that he had lived at the base of the hill for 45 years, and that it had no name to the best of his knowledge.
At one point on my adventure on 'Point 2132', I came upon a rusting piece of old logging equipment. While admiring this small part of history, I thought of an old photograph from a Darius Kinsey book I have at home. This photograph was taken from the top of Mount Cavanaugh, and looked east toward the area I was biking in. 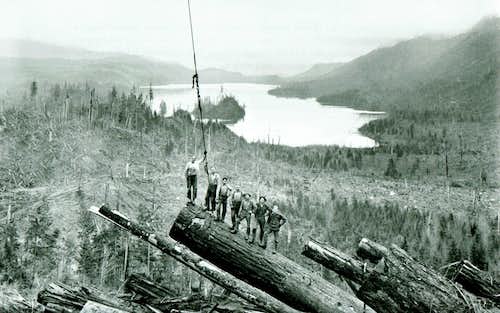 Darius Kinsey photo from Mount Cavanaugh. Kinsey Hill's summit is just out of view to the left, Frailey Mountain on the right.
The next thought I had was that I had never seen the name 'Kinsey' memorialized anywhere in Western Washington, at least in the form of creek, lake, or peak name (For those who don't know, Darius Kinsey was the preeminent outdoor photographer in Western Washington, and particularly Skagit County, from 1890-1940). To correct this terrible injustice, I have decided to unofficially designate 'Point 2132' as 'Kinsey Hill'. One has to imagine that at some point in his career, Darius spent some time on this hill, as he scrambled around looking for logging crews to photograph.
Note: I would appreciate any feedback on the name 'Kinsey Hill'. If you know of a preexisting name, or a more appropriate name, please let me know.

From the north: From the intersection of SR9 and Lake Cavanaugh Road (abeam the south end of Big Lake, SE of Mount Vernon), follow Lake Cavanaugh Road east for 10.2 miles. At this point, follow North Shore Drive 3.5 miles, until reaching a prominent gravel road and white gate. It is possible to drive around the south side of the lake, but it will add an additional mile.
From the south: From Arlington, follow SR530 east for 11 miles to the Lake Cavanaugh Road. This road begins just across the highway from the Oso fire station, and just before crossing the large bridge across Deer Creek. Follow Lake Cavanaugh Road for 5.8 miles, then turn right onto North Shore Drive. Follow North Shore drive for 0.6 miles to the prominent gravel road and white gate.
Please note that the start of this logging road has shifted slightly from the old USGS maps. The 'old' start of the road is now a private road. 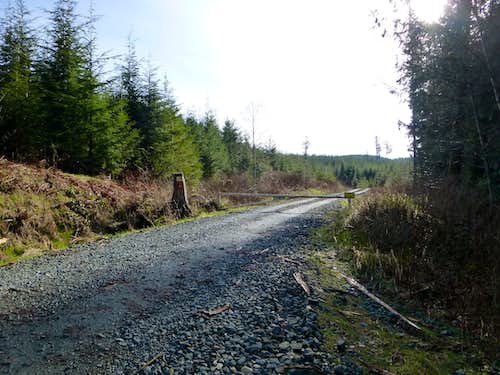 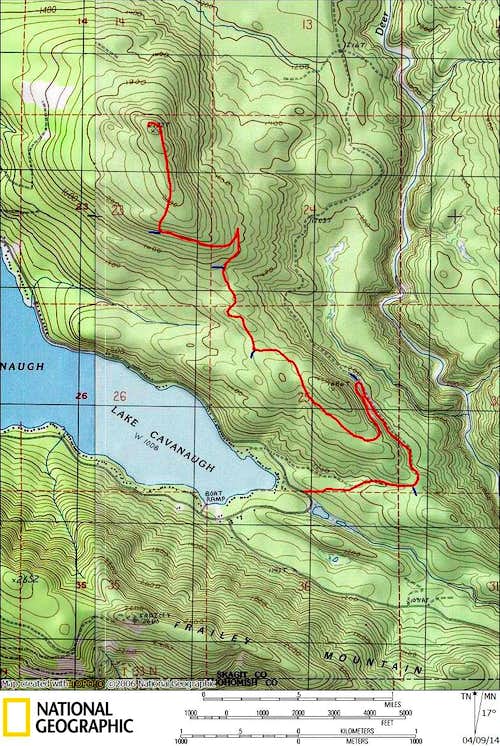 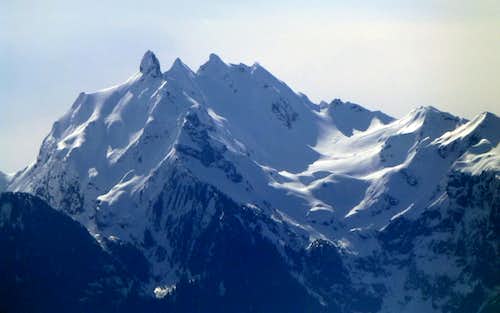 Three Fingers from Kinsey Hill. Notice the large avalanche scar to the east of Tin Can Gap. 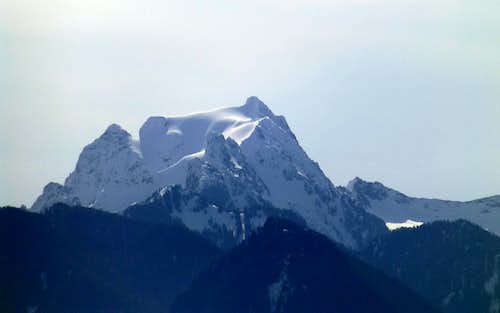 Frailey Mountain from Kinsey Hill. Lake Cavanaugh lies at its base to the north. Mount Cavanaugh can be seen on the far right edge of photo.
Continue up the road to 1800', where you will arrive at a pile of logs blocking the road. This pile is easily passed on the right, but less accomplished bike riders will probably want to lock up their steeds here. At just over 2000', you will top out on Kinsey Hill's summit ridge, and a full north through south panorama can be enjoyed. 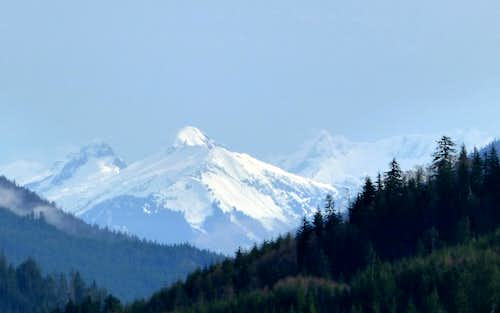 Big Devil from Kinsey Hill (I think, please correct me if I'm wrong)
To get to Kinsey Hill's true summit, follow the road to its very end. From here, follow a game trail about 500' to the summit - no brush bashing required! The views here are not spectacular, but you will have the satisfaction of standing on the 69th most prominent point in Skagit County. Distance from the gate to the summit will be about 4.5 miles, with roughly 1200' total elevation gain. 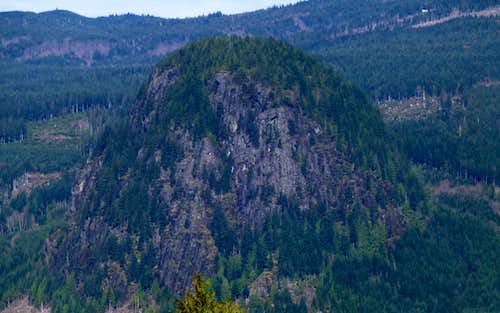 Bald Mountain from Kinsey Hill
Update (4-15-14): Special thanks to Klenke for pointing out that there is a much shorter 'walkup' route for those who are not bike equipped. It begins on the north side of Lake Cavanaugh at N48 19.922 W122 00.898 (Elev. 1030'). It will require a little bit of cross country travel, which was reported as being not too brushy as of 2007. This would be an excellent route if you are just interested in 'bagging the peak'. If you would like to get the same views, it will be necessary to walk back down part of the 'bike route'. 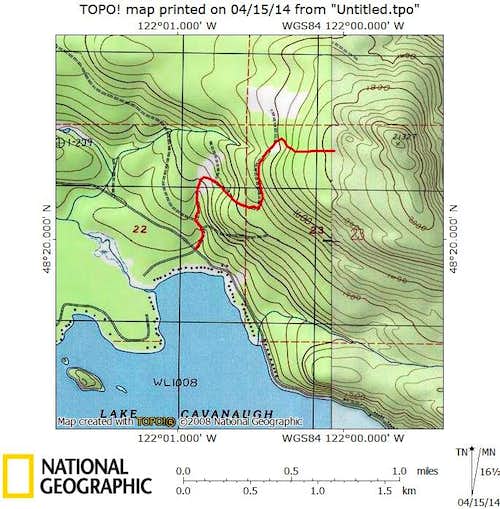 There are no rules posted at the gate. I would assume that the standard private timber company rules apply - no camping, no fires, no garbage dumping, no acting like an idiot. It looks like the logging is done for a while in this area, but expect the possibility of vehicles, particularly if the gate is open.

Any time you want.

I am assuming that camping is not allowed in this area.