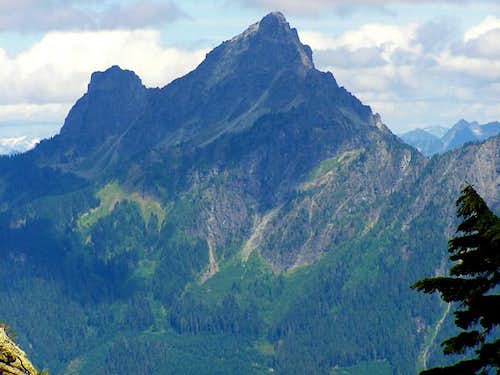 White Chuck Mountain is an impressive and isolated summit located southeast of the town of Darrington. It was first climbed by three men in a USGS survey party on July 28, 1897. Thomas G. Gerdine, Sam Strom, and Albert H. Sylvester placed a marker on the summit and used it for triangulation. With nearly 3800’ of prominence, White Chuck is the 25th most prominent peak in Washington State. Highly visible from the surrounding areas, it towers above the nearby ridges and valleys. White Chuck shares it's name with several other geological features including the White Chuck Glacier on nearby Glacier Peak and the White Chuck River at the flanks of the mountain. This name has some origins in the Chinook language and means something along the lines of "reaching high". 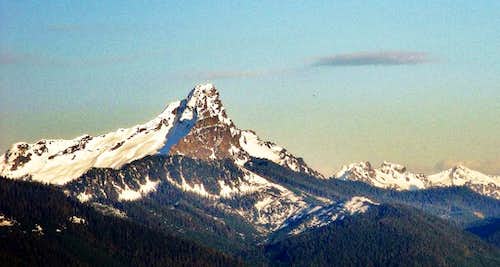 White Chuck is a diverse mountain with steep walls on the east, north and west, sharp ridge-lines and buttresses in-between, an active glacier on the north side and a craggy lower northwest summit. The standard route is an enjoyable and exposed scramble along the northwest ridge. Numerous other technical routes have been established on all aspects of the peak including the northeast peak which is 544 feet lower than the southwest peak. Access to the mountain is incredibly easy. Routes can generally be done as day trips and a majority of the time will be spent climbing the mountain rather than approaching it. With only 2000 feet of vertical gain from the end of the road, the whole trip may be completed in just four or five hours. Once on the summit, the high prominence makes it an excellent viewpoint of everything from Mount Baker to Whitehorse, Three Fingers, Sloan, Glacier Peak and the bulk of the Cascade Range further east.  In August 2013 the summit register was full.  It has been taken to the archives. 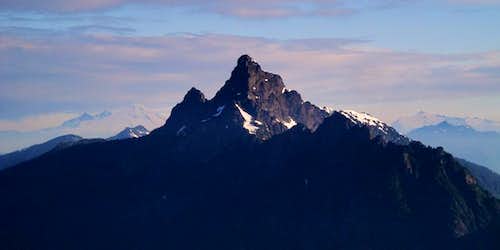 This mountain should not be attempted after recent rain. The down-sloping exposed slabs partially covered with moss are extremely dangerous when wet. 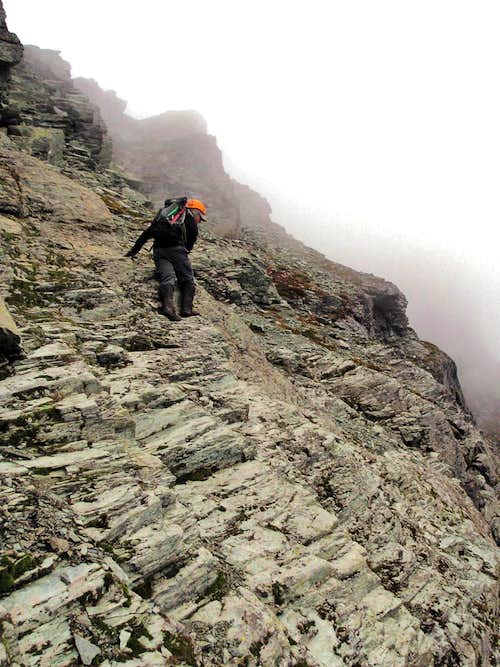 The Most Dangerous Section Of The Standard Route

While White Chuck Mountain is surrounded by logging roads most of these have been washed out or become overgrown. Luckily an excellent system of well maintained logging roads reach high onto the northwest side of the mountain.

Driving Directions State Route 530 leads into the center of Darrington. Turn left (north) in front of the convenience store. After ~0.2 miles turn right on Sauk Prairie Road. After ~1.5 miles turn right onto Dan Creek FSR #24 and follow this for 8 miles keeping left at the fork at 4.3 miles. The road switchbacks several times then begins a long traverse into the head waters of Dan Creek. After ~8 miles on FSR #24, the road reaches a T-intersection. Turn left onto FSR #2430 Shortly thereafter stay right at a minor junction onto FSR #2435. From here-on follow FSR #2435 for 5.3 miles as it winds it way into the headwaters of Decline Creek. It eventually reaches the ridge-crest, switchbacks some more, and comes to a fork. At this last fork, stay to the right and follow to the end of the road at just over 4800' elevation. This is where the trail starts.

Standard Route Approach Directions From the end of the road an easy trail follows the crest of the ridge towards White Chuck Mountain. For the standard northwest ridge route follow the trail as it drops down and around the southwest side of the northwest summit. As the trail breaks out into talus, follow the path up through this talus to reach the gully between the northwest and main summit. 45-60 minutes from end of road.  From the entrance of the gully, ascend 30 vertical feet and then look for a ledge system leading out of the gully across the slabs to the right.  Beyond the slabs, the climbers boot path should be easy to see and follow.  It leads through a maze of down-sloping ledges and cliff bands as it ascends the southwest face below the crest of the ridge.  There are two crux sections.  The first is shown in the photo at left.  The second is near the summit where exposed scrambling is required to cross through a notch.

Other Routes For routes on the north side of the mountain leave the trail after 20-30 minutes from the road and drop down through talus, open forest and brush to the base of the long north buttress of the northwest summit. Scramble around the base of the ridge then straight up through steep forest quickly reaching the large slabby basin below the north face. 1.5-2 hrs from the road For the West Face or South Buttress follow the approach for the standard route then continue across and up open basins and talus slopes. Reaching the east face is fairly involved, continue past the south buttress and ascend to a notch next to a small pinnacle. Follow a steep ramp down to the base of the east face. 2.5-3.5 hours from the road.

Though obviously easiest during the summer, White Chuck Mountain can be climbed year round. Several routes have been shown to be excellent winter climbs. The logging road approach is on north facing slopes and will retain snow into late spring or early summer. 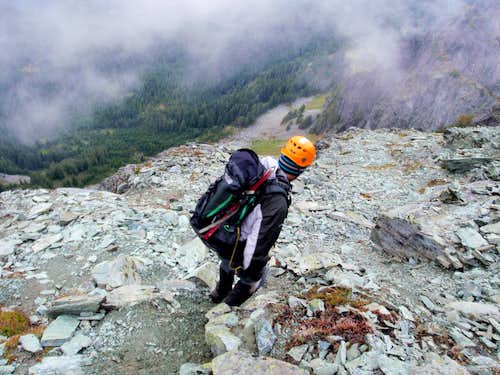 Exposure And Loose Rock On The Standard Route

With the short approach all routes can be done as day climbs during the summer. However beautiful campsites with great views can be found near a small tarn located due south of the summit at 5840' elevation. 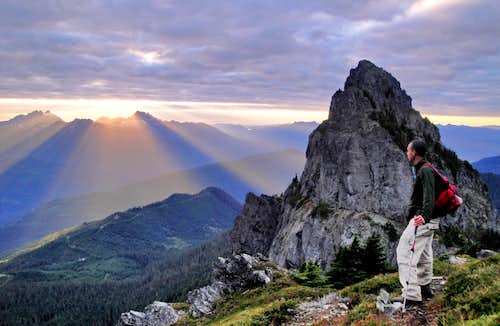 Are not accurate on the main page. I scratched up my truck heading into overgrown roads thinking I was on Road 2435 and needing to turn left at a junction with 2436. None of our three drivers ever saw a Road 2436 or a junction that could be considered one. We all agree on the directions to the point where you get on Road 2435. Then follow that 5.3 miles to a split and take the right fork to the end where the trail begins. Avoid the left fork at 5.3 miles on Road 2435. It goes another mile/mile and a quarter through overgrown trees and ends with a large fir downed on the road.

Brian, I'm sorry that this page caused you confusion on your trip. I recently adopted this page and I made a lot of changes to it but hadn't yet updated the driving directions. Luckily, when I went there, my buddy was driving and had already been there several times before. Thank you for sharing the mileage details with me. I have incorporated your updated info into the page. Please take a moment to look at it and see if you think it is clear enough. I don't want anyone else to be mislead by the previous owners description. Adam