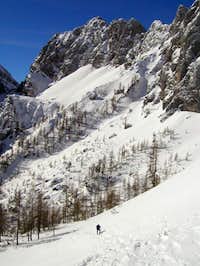 The Triglav Hut on Kredarica/Triglavski dom na Kredarici lies on the Kredarica plateau
just east and beneath Triglav, the highest summit of Julian Alps and Slovenia.
At 2515meters/8251 feet it is the highest, largest and arguably, the most frequented hut in Slovenia,
mostly due to fact that it is a starting point for summiting mt. Triglav over the common and the most popular route.
It is also a back-up point for various multiday traverse routes.
High lying position and open spaces offering extensive views make this hut even more popular. You can often see people sitting on the benches
infront of the hut and simply enjoying the views. On bad weather, they gather inside the hut's five dining rooms, in the peak season
some will sleep here as well. In the winter, crowd is gone. Because it is also a meteorological station, however, meteorologists always prepare some hot meal and tea for winter visitors. Recently, they got the Plasma TV as well
Today’s look is from 1984. In 1992 chapel was erected next to the hut. Every hour its bell rings. Actually, bell can be triggered
by pulling the outside rope, something that  was occasionally misused even in the midde of the night, by guys having  beer or two to many,
to the enjoyment of people sleeping in the nearby annexe. Annexe is between the chapel and  the main building, mixed rooms and bunks,
and with own toilets, so there is no need to run to the main toilets in the middle of the night.

Getting to the hut

Getting there by car:
From north, direction Munich-Salzburg, via Villach and Karavanke tunnel, motorways A8/ A1/A10/ + A11, must pay vignette + tunnel road toll. At the south tunnel exit fork right for Dovje, Mojstrana.
Same spot can be reached from west, direction Tarvisio, via Kranjska Gora, and from the east, via Ljubljana, Radovljica, Jesenice.
From Mojstrana, there are 3 choices, down 3 different valleys:
Vrata valley, 12km from the Mojstrana till the parking lot near the Aljažev dom v Vratih hut. Partially surfaced road. From the hut,  two secured
paths, Tominskov and Cez Prag , 5-6  hours. Out of two, Tominskov route is more difficult and less frequented.
Kot valley, unpaved road till the eastern flanks of Mlinarica (water source there), up to Stanic hut and another 1 to1 1/2  half hour till  Kredarica.
Krma valley, from Mojstrana 12km of unpaved road,  pass the Kovinarska Koca hut till the Hunters lodge (Lovska koca). Here, marked path
branches in two directions;
1. due east up the Lipanska vrata pass then down to Blejska koca hut at Pokljuka. 2. Due Southwest up the Upper Krma ( Zgornja krma) valley
and beneath the Rz summit till Kredarica. From Hunters lodge in Krma till Kredarica hut, 5 1/2 up to 6 hours.
This is the only trail with no water sources enroute. Krma valley trail is common winter ascent/ski tour route.
Altitude gain from either of the 3 valleys is about 1500m/4900f

From the south, Bohinj lake, to Stara Fuzina village and pass the Vodnikova koca hut (water spring), 5 1/2 to 6 hours.

Nearest airports are Klagenfurt and Ljubljana. Klagenfurt is closer, also serves no frill cariers (Ryan air) and is less convinient. You'll have to change trains
at Villach in order to get to Slovenia.

Routes and traverses from the hut 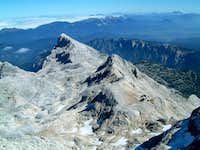 Looking down to Kredarica hut

Routes from the Kredarica hut:
Triglav (2864m/9394f) normal route. Time required round 2 hours. Secured path. Using ferrata gear common these days.
From the hut slight descend due south to the small pass at the foot of Mali Triglav. From here up the steep slope till the first rocks,
where secured path (lots of iron pegs) begins, leading to the Mali Triglav (2725m/8939f)/ From here, path continues along the panoramic crest - crest surface was man made flattened and widened for the safety of numerous visitors - till the foot of the main Triglav summit.
Another piece of steep secured path takes as up to the memorial tablet to Sloveinan painter Marko Pernhart - this particular section is often a bottleneck in the high season, finally reaching the main summit with the trademark Aljaz tower on the very top.
From the hut, back the same way, or by  popular and scenic alternative route down due southwest to Trzaska koca hut (2150m/7052f) descend into 7 lakes valley (1700m/5576f) till Triglav lakes hut.

Traverse to other huts and time required:

Other useful things you can buy at the hut
Triglav 1:25000 topomap, 9.00 Euros
Various postcards, 0.65 Euros each. Add 0.45 Euros for abroad stamp
You can also buy pins, t-shirts, hats and other memorabilia

USD prices indicated for your reference only, calculated at 1.42955 USD for 1 EURO, as of October 2007.
You have to pay  food/drink/accommodation in Euros.

First hut was opened on August 10th, 1896, on the ground bought and donated  by bishop and mountaineer Jakob Aljaz,
Modest woodden cottage was enlarged  in 1909
and renamed into Triglavski dom na Kredarici (the Triglav hut on Kredarica), name that remained up to this day.

Guidebook in English from Cicerone press