Hiking the Kungsleden and Climbing Kebnekaise 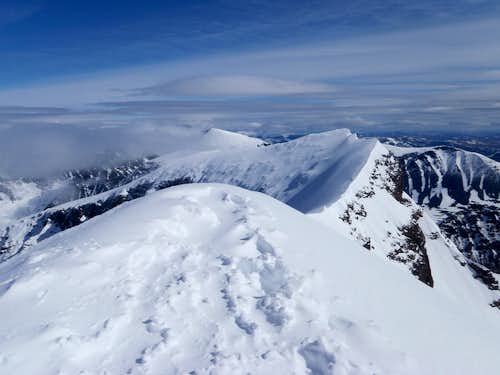 I’ve been climbing, hiking and skydiving for a few years now, but despite the risks, I have never been around to see someone badly hurt or killed in an accident.  The closest I’ve come was passing a hiker in Sweden a few hours before he fell off a cliff and died on the same route I had just taken.

In June 2010 I had made the long journey to the north of Sweden to do a section of the Kungsleden (‘King’s Trail’).  It is Sweden’s great hiking track, running from up in the Arctic circle down south for over 400km.  I had nine days and was going to get as far as I could before I had to find my way out a side trail to get to a road and public transport.

It remains to this day one of the greatest hikes I have ever done.  I started at the northern end, getting off a train at Abisko station in the absolute middle of nowhere where the trail began.  The route is well manned during the winter and summer season, but has a dead spell in Spring during the change of seasons.  While I was there the huts were empty, and the trail still snow covered and completely free of other walkers.  The sun dropped below the hills during the night, but it was still light as day and hard to sleep until exhaustion caught me around midnight each evening.

The Northern Beginning of the Kungsleden at Abisko

I think the trail would be at its best in early Spring when I went.  It is easy to follow and generally flat, but the snow and ice gave it an extra level of beauty and difficulty.  At times I was knee deep in soft melting snow, which found its way into my boots with ease.

The remains of a short snow storm

Remains of the ice

I would trust my life on this bridge

I wouldn't trust my life on this bridge

Much of the trail passed through beautiful U-shaped valleys, carved out by long vanished glaciers.  The snow still on the ground gave a clear reminder of the massive forces that had once been at work, which might have been missed during the summer months.

The Kungsleden Trail (somewhere under this snow)

The rivers were no longer iced over and ran freely, but the banks were still lined with thick ice sheets washed when the river was high.  The lakes were all still partially iced over with drifting flows.  In general, the water looked cold enough to kill a man in a couple of minutes, tops.

The animals were few and far between, but all had a simple arctic beauty.  Small solitary birds sat on their nests unperturbed as I walked by metres away, while others flew hundreds of metres to swoop at me like magpies for encroaching on their nesting territory.  I saw arctic foxes and rabbits that were in the process of changing colour from white to brown fur as the snow receded and they needed to blend in with the exposed dirt and rocks.

A long-tailed skua defending its nest from my intrusion

Look closely to find the birdie

In the middle of the hike I passed three days without seeing another person.  It was only broken when I reached a dead end – a frozen lake that I couldn’t cross.  Rangers were at the huts preparing for the summer, but even with their boat we couldn’t find a way around the ice flow in the middle of the lake.

Trying to find a way through the ice flows

I had retraced my steps to a side trail that would take me out to a main road.  It reached a lodge that was the main mountain hiking retreat, and the base for climbing the surrounding mountains.  With a day to kill, I asked for directions to climb Mt Kebnekaise, and set off without dropping any gear.  I was told it would be easy, and I didn’t need an ice axe or crampons, my hiking poles would be more than enough.

On the way up I passed a couple of other hikers, one well equipped, and one looking like he had grabbed a pair of gumboots and a parka from the back door of his house before going out for a stroll.  They both had long sticks with a sharp point that they would later use to navigate the snow slopes.  The sticks would be essential, because I later found that the short snow slopes were brutally hard, with a thin soft layer of slippery snow.  It was easy to fall and start to slide, which I could only stop with careful use of my hiking poles.

A sleeping spot near the top of Kebnekaise

I spent the night on the slope just below the summit in a bare hut, where my water, boots and socks froze solid while I slept.  The next morning I finished the last half hour to the summit, a small knob on top of a broad plateau that dropped off into vertical cliffs.  Mt Kebnekaise is only 2000 metres high, but as the highest point in Sweden it has a commanding view of the peaks, valleys and glaciers that surround it.

The summit knob of Kebnekaise

A view from the summit down the ridge line

After 20 minutes of photos, selfies and snacks, I began the three hour hike back to the lodges.  I had the good luck to meet a Swedish father and son that had just finished the hike a day behind me, and who offered me a ride back to Stockholm in their car. On the way they told me that friend had texted them to let them know that someone had died on Mt Kebnekaise while I was climbing it.  We got a copy of the local paper on the way home, and read the story of the tragedy.  Two young men had gone up the mountain, the same guys I had passed without a doubt, and one had slipped and simply slide down a snow slope and off a 400m cliff.

Only a day later it already felt so distant, like an abstract incident that we skim over in a newspaper almost every day.  It was hard to believe that I had been right there, had passed them and greeted the guy who was just about to die.  Years of outdoor adventures have taught me to appreciate and manage the risks, while still somehow believing that none of it would really happen to me.  I think I was more experienced and prepared than they were, but that wasn’t always true, and a little luck had taken me a long way over the years.

The start of the trail at Abisko can be reached by train from Stockholm and other locations.  For details on planning the trip see Wikipedia and official information.