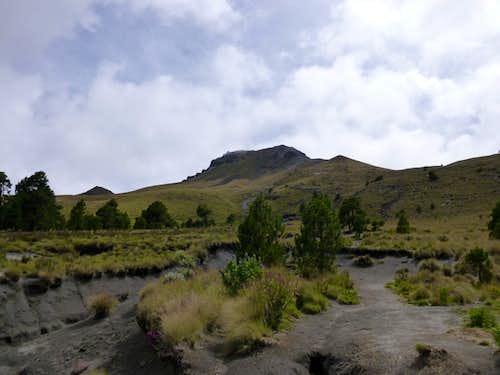 So many times I had planned to drop south of the border and
explore these smoking giants.  On one
particular occasion, Brian and I had the whole expedition dialed in to the
point that he went and I could not.
Brian executed the plan we had meticulously crafted and I was
hamstringed because of work.  In February
of 2012, he summited Orizaba after an acclimatization run on La Malinche.

It was sitting in the back of my psyche, smoking like Popocatepetl.  Fall break was something that used to be less
than a week but thanks to new block scheduling, I was facing a protracted
period of vacation.  What were the
chances….I started migrating my keystrokes to Kayak.  The two week window approached as I punched
in every possible combination.  The day
before 14 days out I made a decision.
And with the punch of a “purchase”, I was booked on United to Puebla at
the cost of $630 USD.

Eight days was the minimum required for acclimatizing. I
couldn’t talk anyone else into this trip.
It was last minute and no one had that sort of flexibility.  Several had the “wanna want to’s” but I
didn’t expect anyone to drop their entire life to accompany me to the land of
the Aztecs.  Climbing solo is a different
ballgame but not entirely unfamiliar.  My
last jaunt of this sort was to Ecuador in 2006.
It was Cotopaxi that entered my sights in preparation for Denali.  Like this Mexican adventure, I was prepared
for flexibility and intended to arrange a guide.  There would be no guide on Citlaltepetl,
Mexico’s highest mountain at 18,700 feet.  And that was sounding alright by me.

Seven hours
in Houston and I was boarding a jet to Puebla.
Two hours separated me from the country in which I had never climbed
anything short of a small pyramid outside of Cozumel.  I passed customs undeterred and a one hour
cab ride landed me square in the center of the Zocalo, Puebla’s old city
center.

Puebla is a renaissance city with great charm and hints of
Old Mexico.  But modern touches creep
into the skyline along with smog and a heavy people load.  Bristling with over 1.5 million, Puebla is
the country’s third largest city and sits in the shadow of La Malinche, an
inactive volcano that dominates the skyline.
My temporary residence while I acclimate to the 8000 foot elevation gain
is the Mesones Sacristia de La Compania Hotel.
This “boutique” residence has less than 10 guest rooms that border a
courtyard known for its gourmet mole concoctions.  It was listed at well over $150 per night but
I snagged a room for $70 on hotwire.
Hotwire is a great friend of the flexible traveler, by the way.  It wasn’t the first time I took advantage of
their economic offerings on this expedition.
My first experience was with the airfare.  I would later book another 4 star lodging at
the tail end of the trip for very little more.

My first order of business was to secure transportation to
La Malinche and the hotel was quite adept and finagling a cab driver who agreed
to wait for me as I finished my climb.
Total cost for the transport was $84 USD. (For the sake of clarity, I
have substituted dollars for pesos to give a sense of value for Americans) My
second morning was to be relaxation in the city and acclimatizing which was
quite comfortable as I toured the old city Cathedral and Zocalo square.  Walking through the old cobbled streets of
Puebla, I was reminded of the 1600’s.
Middle school children approached me in groups to practice their English
and ask the same questions.  Yes, I was
that obvious, apparently.  Friday,
October 3 was to be my day on La Malinche but the weather was not looking so
hot.  It was raining frequently in the
city and the forecast was more of the same.
It didn’t matter because I had a schedule and it needed to be
followed.  Early the next morning, after
a great supper at the hotel, I was headed out of town with my taxi driver who
spoke no English.  This was quite common
in Mexico.  At least he understood the
destination, although he had never personally been there.

La Malinche was somewhat difficult to find even for the
intrepid cab driver.  He stopped for
directions on three occasions.  And you
climb through these small hamlets of towns to enter the National Park for which
there is no entry fee.  I am thinking it
took at least an hour and a half to arrive.
By 10 am we had reached the end of the road, a gate separated us from
another mile of road.  I saddled up my
daypack replete with copious water and snacks and rain gear and began a 4000
foot climb to the peak inside the National Park.  It was as straightforward as you could
imagine.  Beginning along the road, I
used switchbacks that dissected the gated paths until the end of pavement found
me ascending dirt through a pine forest for a couple of steep miles.  Books have the jaunt pegged at 6 miles one
way but I’m not sure if they include the closed road section.  Either way, there is a resort at the base and
you can begin you ascent accordingly, if desired.

I was feeling especially strong given two days of travel and
relative inactivity.  The idea of
sweating up a hill with a daypack was just the trick and my stride was
impressive.  I had gained two thousand
feet before finishing the tree line.
From there, in the fog and mist and what I fully expected to be a
torrential rain storm, I began the grass which hugged a ravine and ended in a
scree slope.  Through the mist, small
openings were all that revealed my objective.
It was from these mental bearings that I was able to navigate to the
scree field for another 600 feet.  The
end of the scree found me on a ridge line at 14,000 feet.  It had taken me 3.5 hours to reach this
particular point.  The altitude, although
heavy, wasn’t weighing me particularly and my pulse was 130 bpm.  This cardiovascular event had the
psychological effect of loosening the plaque from my sedentary arteries and
brain, conferring life back into my body after traveling from sea level in Tennessee.

On the summit ridge I walked in scree until gaining a
prominent rock feature.  My decision to
climb over instead of around was laughable on descent but thus is the nature of
my astrological cancerian crab movements.
Soon another rock gendarme was to be dealt with in similar fashion and
there, in the fog and mist of a Friday afternoon, I found the small cross that
signified the “cine” or “cumbre” of Mexico’s third highest peak.  It was tucked in the fold of volcanic rock on
a table sized area surrounded by more latent volcanic shelving.  It was a summit and I enjoyed every cloud
socked minute.  For 15 minutes I relaxed,
shot video and waited for the elusive opening in the sky that was not to be. My
summit photo could well have been on a movie set but my lungs were leaving
little doubt.

Dropping down I followed another route that avoided the
class 3 scrambling on the climb.  Then I
could see the error of my way. There were paths that circumvented the rock
bands and I had little difficulty following them back to the ridge and scree
line.  There, on the scree field, the sky
parted and displayed what I had just climbed.
La Malinche was shining in all her majestic glory.  I “skied” down the scree field for several
hundred feet.  Soon I was back at the
tree line and intercepted three trekkers that had attempted a nearby peak.  One lad was French and the other guy and gal
were from Singapore.  We followed each
other back down in a descent that would take two hours.  The total time to the summit was, for me,
four hours exactly.  This contradicted
the claims of my cab driver, Juan Carlos.
His conviction was firm that I should summit in two hours.  That is why I didn’t pay him until the
return.  And there he was, dutifully at
his post when I came pouring back in sporting a total time of 6 hours.  The kids I had met were anxious to split my
cab back to Puebla.  I had no problem
allowing them to cram into the back and Juan Carlos appreciated the extra
income which shortened his tip from me considering he didn’t make any allowance
for our pre-arranged price.  La Malinche
was in the bag and the evening was spent in a celebratory dinner with music and
singing provided compliments of the hotel.