During my brief 1 week trip back to Washington from Montana the second week of September, I was searching for friends to climb with in between working at the Association of Engineering Geologists Annual Meeting in Seattle. Josh was the only person who had available time and I was thankful he was willing to join me on Little Annapurna despite him having already done it. Otherwise the awesome week of great weather would have been a waste! Since I was already in Leavenworth on my way back from Montana I drove over Stevens Pass to pick Josh up in Monroe. We made it to the Ingalls Creek Trailhead shortly after dark and we crashed for the night. We threw around many different plans from doing Cashmere Mountain, the North Ridge of Sherpa, Prussik Peak and Witches Tower but since I wasn't interested in hiking back to Colchuck Lake and up Aasgard Pass, I decided on the only remaining peak I haven't done in the Stuart Range...Little Annapurna.

Now I certainly wasn't interested in doing the easy north slopes route so I referred to Brown Fred and low and behold, there was a 5.6 route on the steep south face and that was it! I had made my decision and Josh agreed on the route choice. I was excited to be doing a route that probably no one ever does. Little Annapurna is likely the easiest Bulger as there is a Class 1 trail to the summit from the Upper Enchantments but the steep south face requires technical climbing. I remember seeing this face from Argonaut earlier in the year in May and thinking how awesome it would be to climb Little Annapurna the hard way! 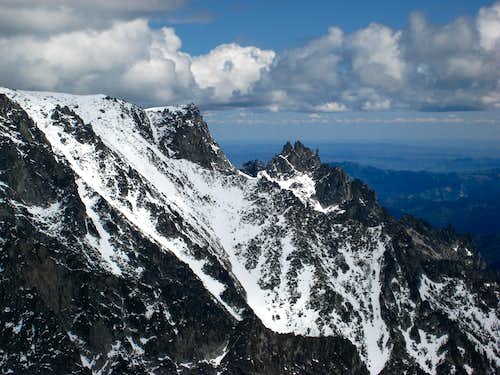 So we began hiking up the Ingalls Creek trail at 8:30 am which parallels the south side of the Stuart Range. It was a very long 8 mile hike to the point where the trail crosses Crystal Creek. Just before crossing the creek, we turned north and left the trail. Almost a year ago I came down this way from Crystal Lake after Rob, Fletcher and I climbed McClellan Peak from the south so I had a good idea of the route to Crystal Lake. At 10:30, three hours after starting out we started hiking steeply up the slopes just east of Crystal Creek. For the most part, the terrain was grassy with some nice low angled granite slabs to scramble up. Lower down there was some bushwhacking but it was mostly simple until the large boulder fields before the small tarn at 6,000 feet in elevation. This hike from the trail to the small tarn was a 2,200 foot ascent and was in the full heat of the sun. Upon reaching the meadow just north of the tarn, we set up the tent and took a lunch break. To my surprise, the tarn was filled with very brown, muddy water due to the extreme rain storms the previous week. The amount of water that fell on the mountains caused many rock and mud slides in steep areas and we also noticed Ingalls Creek was nowhere near as clear as it normally is. Due to the nature of the water in the tarn, we were not able to use it since we only brought Chlorine drops to kill bacteria, not filter it. So we searched for clear water and found some at the upper end of the meadow. 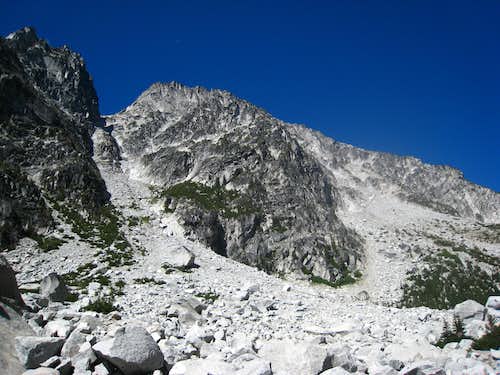 Looking up the ascent gully from the tarn

The big gully west of the tarn was easy to spot and that was the start to the route. So we ditched all the overnight gear at the tent and started up the talus aprom at the base of the gully around 2pm. The first 400 feet was on loose talus and scree but we soon were scrambling on sustauined 4th class on awesome granite rock. I ended up climbing a low 5th class 30 foot crack mid-way up the gully. Josh went a different, slightly easier way and we met up and traversed left into the upper gully proper which was steep 40 degree but mostly clean granite slabs. We continued scrambling up towards the 7,700 foot col at the base of the south face of Little Annapurna but were halted by a 20 foot section of slab right below the col where the slabs steepened and loosened considerably to the point where I wanted a rope however there were absolutely NO options for protection. It was all smooth slabs with no cracks of any kind so I was forced to climb 5.6 slab on very thin and poor holds, some of which I manufactured by banging out loose rock, for about 20 feet. I made it a little easier by putting my rock shoes on and tied the rope to myself while Josh waited. Since there was no option for a belay anchor I had just just wait without belaying me. I carefully made it past this section and up to the col where I anchored myself and belayed Josh up. 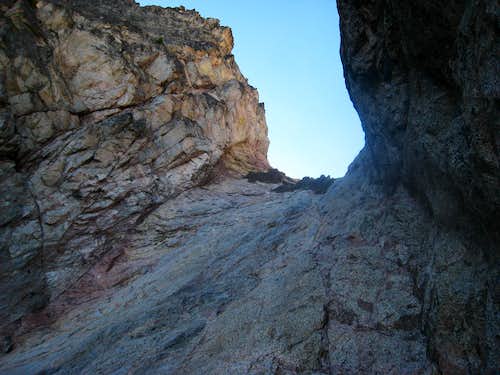 The final scary part of the gully just below the col

Now at the col, we finally were able to see the south face up close and I was easily able to see the correct route as Beckey had described. We scrambled 100 feet of easy class 3 terrain to where the rock steepened and I racked up. Josh belayed me as I led up the first pitch a full 60 meters. The rock was spectacular and easy offering great protection. The crack went about 5.4 and was really an oversized scramble. When the rope ran out, I anchored into a huge horn and belayed Josh up. He then led the second pitch which started with a small rightward traverse and up a chimney. He ran out of rope a short ways below the summit and after I followed up, I continued up the chimney, passed through some huge rocks just below the summit plateau and reached flat terrain a few seconds later. This third pitch I didn't place any pro as it was only Class 3 and I belayed Josh up and we made the final 20 foot scramble to the highest point. It was around 5:30 pm when we reached the summit and we spent a good half hour enjoying the late afternoon sun on the Enchantments. What an awesome day! 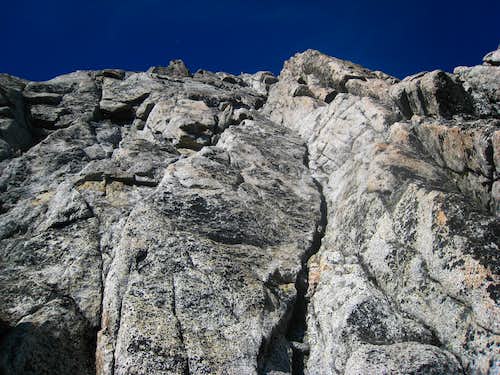 Looking up pitch 1 at the base of the south face

Since it was getting late and the breeze was picking up, we started hiking down the northeast slopes towards Crystal Lake. The hike down to the lake was easy and quick and we picked up the outlet stream (Crystal Creek) and hiked lots and lots of talus back down to camp at the small tarn below Crystal Lake. I arrived at the tent just as it was too dark to see without a head lamp and Josh arrived 10 minutes later. After a quick dinner we both went right to sleep. We decided to bag any ideas of doing Prussik Peak the next day and slept in and made a leisurely hike down Crystal Creek, which we of course missed the cairned path and ended up bush whacking quite a ways. I was relieved to reach the Ingalls Creek trail. The ensuing 8 mile hike out dragged on and on but it wasn't as bad as hiking it in the dark after climbing McClellan Peak the previous year in one day. I considered this a fun outing and was happy Josh was able to join. Very few people climb Little Annapurna via this south face route. 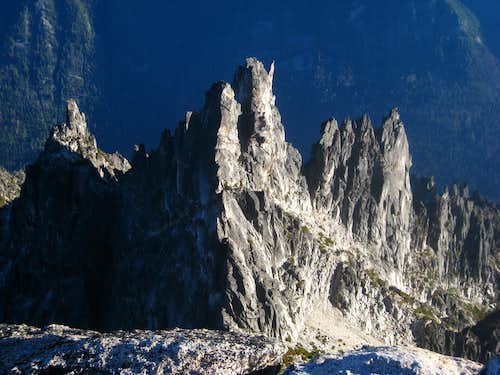 Shown above is a map of our route. The Ingalls Creek trail approach is not shown. Blue is the hike up Crystal Creek, Yellow is the ascent up the South Face and Pink is our descent back to camp.

Thanks for Inviting me

This was the beginning of an epic week. In your report "Josh went a different, slightly easier way". It was a little more than slightly easier. ;-) You had me belay you through that section which is more than understandable.

Re: Thanks for Inviting me

LOL yeah I left out all the gory details...Glad you could come!