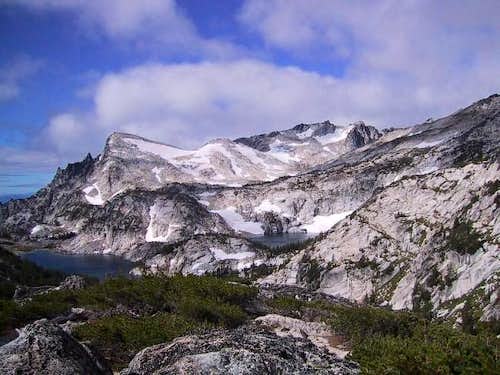 The views from Little Annapurna make it one of the premier places to go while in the Enchantment region and can give you one of the best views imaginable. Facing south, you can get a great view of Mt. Rainier on clear days while at night, if you spend it camped out near Lil Annapurna's summit, you get great views of the lights of Wenatchee to the east and the headlights of vehicles moving on I-90 to the south. Facing west, you get a really great perspective of Mt. Stuart and Dragontail Peak. Having the upper enchantments at your feet is an enjoyable sight. Of course the view back down on the Enchantment lakes area is unsurpassed as Little Annapurna is my favorite spot to just sit and soak in all of the areas grandeur. There's a flat area large enough to pitch a tent near the summit and it makes a grand camping spot. The summit area of Little Annapurna is one of the more interesting areas I've ever found in the Cascades. I met a New Zealand gal who had camped out up here overnight one time and she still had stars in her eyes from the experience. However, not a place to be during a storm (doh).

From Seattle there are 2 routes you could take. First, you can get on I-90 and head east over Snoqualmie Pass to Cle Elum, taking the exit to Wenatchee & Blewett Pass via 970 and then US highway 97. Highway 97 takes you over Blewett pass to a junction with U.S. 2. Turn left towards Leavenworth. Go through Leavenworth (you pass the Leavenworth ranger station on this road) until you come to the last road before you start to enter Tumwater canyon and turn left on Icicle road, going 4 miles until you come to the Snow Creek Trailhead parking area, very obvious on the left. Should you decide to go in via the Snow Creek trail, the most common route into the Enchantments, go no further. If you are going to use the Aasgard route via Colchuck Lake and the Stuart Lake TH, continue on past this parking area until you come to a turn off for Bridge Creek camp ground (left turn only) and FS road #7601, crossing a bridge over the Icicle River and continue onward almost 4 miles until the road ends at the Stuart Lake / Colchuck trail head parking area. Northwest Forest Service pass required.


The second way to get to the same Icicle Creek TH from Seattle or Everett area is to take US 2 over Steven's Pass to Leavenworth. When you come out of the canyon, turn right on the Icicle Creek road and drive as before.

As was pointed out to me, not everyone comes from the Seattle /Puget sound megapolis area. The other major city to be concerned with is Spokane. The best way to get there from Spokane is to get on I-90 until you hit the U,S. 97 exit on the western side of Ellensburg and look for the Blewett Pass / Wenatchee via U.S. 97 signs. An interesting alternate route would be to take U.S. Hiway 2 (two lanes most of the way) through Wenatchee.

As mentioned in my other pages on anything in the Enchantment area, be advised that RED TAPE runs rampant in this area of the Alpine Lakes Wilderness. With the proximity to major metropolitan areas of Seattle, Everett and all of the Puget Sound megapolis, there is a need to control the number of visitors to this very fragile area.

First, you need a NW Forests pass to park at the trailheads. You can purchase one at the Ranger station in Leavenworth or at either one of the sporting goods stores. REI stores in Seattle or just about any outdoor sporting good stores elsewhere sell these passes. It is $5 a day or $30 per year. The Enchantment core area is a whole different kind of problem as you need a special permit to camp overnight in the Enchantment core area. Also, be certain to make sure your car doesn't appear to have anything valuable visible as breakins have occurred at this trailhead. Day permits are available at both trailhead if you don't plan to camp out and these permits are free. To do this in one day however, is a real difficult way to enjoy this area.

For a little more insight into how the "lottery" system works, check out the following:
Here is an excellent website story by Sarah Boomer that gives some background to the permit system that is in effect in the Enchantments and is a fun read as well. Her explanation of the permit system, done lottery style, is as good a description as you can get.

Information on Peaks in this area

The Top 100
Of the 100 highest mountains and peaks in the state of Washington, the Enchantment area has six of them.
Colchuck, Dragontail, Little Annapurna, Enchantment Peak, Cannon Mountain and McClellan Peak . Prusik Peak, while not one of the highest, might be the most popular of the area peaks sought out by climbers. An interesting new website has been developed that includes some of these as the Leavenworth eight You might find this an interesting site to check out.

If you want to do some rock climbing, be sure to check on the Prusik Peak page (click on it in the overview section) and read on about the area right below Little Annapurna.
I'm in the process of developing some helpful maps of the area so stay tuned.

Little Annapurna is easily accessible by trail. One trail comes up from the Snow Creek Trailhead, a good ten miles or so distant from Little Annpurna's summit and 7100 feet lower so doing it in one day is a real event. The other trail comes up from the Stuart Lk / Colchuck Lk trailhead and is about 7 miles in distance with and elevation gain of 5100 feet. This route takes you up and over Aasgard Pass which should be done in the early part of the day during the hot time of the year. In this case, if Little Annapurna was my only goal, I would consider the shorter Aasgard approach. However, if you get a permit to camp in the Enchantment core area, read on.


The Enchantments are one of the great places to camp in the Washington Cascades and if you get a permit for the Enchantment Lakes themselves, there are plenty of places to camp at. No campfires are allowed so you need to bring a stove for your cooking needs.

Camping is also available at Nada and Snow Lakes on the Snow Creek trail access and at Colchuck Lake on the Aasgard approach. On Ingalls creek there are several nice places to camp along the river and if you are looking for a car camping campground, then 8 Mile campground on the Icicle Creek is a nice place. Leavenworth has a lot of motels but be warned, they are all expensive as Leavenworth is a very popular tourist town.

Mountain Conditions / when to climb / what to climb

The best conditions for visiting the Enchantments and climbing Little Annapurna is generally late June through October, which of course, is dependant on snow and weather conditions.

The northern approach is merely a walk up requiring no skills although early in the season when a lot of snow remains, it is best to exercise caution and an ice axe might be advisable. Normally, the descent can be done quickly with a few glissades.

The south face is a rock climbing route and is described in Beckey's Cascade Alpine Guide and I'll defer you to that great resource.

Immediately below Little Annapurna is an area that Fred Beckey gave the name "nightmare needles" Several of the formations in the nightmare needles provide excellent challenges and are unique. The "flagpole" is the most famous of them and is easily visible as you look over the edge south towards the Ingalls Creek side. Other structures worth noting are Pennant Peak, Seal Head, Horizontal spire, Porpoise point and others. These can be approached from near a dry tarn on the Crystal Creek approach (described at the McClellan Peak page) For more details, consult Fred Beckey's "Cascade Alpine Guide" starting on page 271. Here's a listing of what is available:

Both groups of needles are accessed from Crystal Creek, accessed by dropping over the south rim near Crystal Lake.
All are well described in Fred Beckey's Cascade Alpine Guide
(see books at left)

For additional stories about the Enchantment area, I'm putting them all at the Trip Report page located at my McClellan Peak page. Just click on Trip Report above to be taken to that page.

In the November issue of Rock and Ice magazine (#119), just inside the back cover was a picture of Prussik Peak. Some route descriptions were included but most stunning was the picture of Prusik. In the recent issue, January's #121), a reader wrote in to voice objection to the fact that the magazine had focused on the Enchantment area (meaning Prussik in this case) and was concerned about the fact that not enough was said about the permit system and the heavy impact that this area is subject to. Overuse was the concern, too many people. Here's my 2 cents on that. The majority of people now coming into this area (wasn't always this way) understand the LNT ethic. You have to earn your way up to the Enchantments, you pay for it one upward step at a time. You are entitled but do be legal and get the required permit(s) and follow the rules of this fragile high country. It is there for all of us to enjoy so we need to take proper care of it. Here is a pic I took of Prussik that is from the same spot as the Rock and Ice photo.

A neat resource can be found here, not just for Little Annapurna but for tons of mountains. Particularly helpful if you're looking for a peak that isn't listed at SP.

Click HERE for Leavenworth weather. If the weather is lousy in Leavenworth, you can bet it'll be nasty in the Enchantments.

On July 24th, 2005, a young 22 year old man died from a fall suffered on Little Annapurna. He evidently stepped onto some ice and plunged into a lake at the foot (northern) of the mountain. INFO here.

Always be careful and realize that even a relatively benign mountain such as Little Annapurna can be dangerous under certain conditions.

Hiking or climbing in a mountain environment has many risks. Any who choose to participate in such activities must assume the responsibility for their own actions and safety. Any information provided here cannot substitute for your own sound judgement and decision making skills. For example, hiking into an electrical storm or during an electrical storm is reckless and dangerous. It is not my intent to describe every risk (weather, rockfall, animals,
accidents, etc) that you may encounter on visiting this area but the author of this page is not resposible for your safety. You need to be prepared for the unexpected and proceed accordingly. All risks are assumed by the participant(s). Having said that, I wish you a great trip into this
magical area but exercise care and caution to make your visit a safe one.