Southern Utah is famous for so many scenic wonders, and among the most beautiful and fascinating of them all are its slot canyons, narrow and twisting corridors whose walls bear almost unbelievable erosion-caused shapes and patterns. They seem not of this earth, and a walk through one will indeed make one wonder if he or she has entered another world.

Many of the best slot canyons have technical sections, many have sections requiring wading or outright swimming, and many have both. Those who have the proper equipment or tolerance for such conditions must find solitude and rewards few of the rest of us can even imagine. For those like me, though, who for whatever reasons don’t use climbing equipment beyond ice axes and crampons and who prefer getting wet only under a hot sun, there are still wonderful slot canyons, or at least good stretches of them, available for exploration.

And that is why I write of Little Wild Horse and Bell Canyons in Utah’s San Rafael Swell. The San Rafael Swell itself is a wonder unknown to few outside Utah and Colorado, but it has everything Utah’s famous, often-crowded national parks have—sheer red cliffs, arches, slot canyons, sandstone spires and monoliths, rock art, and more. And its size and remoteness keep it relatively pristine considering that much of it lacks any meaningful or feasibly enforceable legal protection.

But back to the canyons-- Little Wild Horse and Bell Canyons make a nice loop that cuts through the San Rafael Reef, both canyons narrow to slots for enjoyable stretches, and both are, under most conditions, dry or nearly dry. The dryness may be due to the relative steepness of these canyons; from the trailhead to the highpoint on the San Rafael Swell, hikers ascend about 700 feet. When I hiked the canyons two days after a good rain, I encountered several pools of water, but none of them reached my knees. Hence, there is probably nowhere else in Utah that offers such convenient access to slot canyons coupled with such favorable circumstances at the same time.

Route-- The loop through the canyons totals about 7.6 miles, and it is mostly hiking with occasional easy scrambling. A trekking pole might be useful to test the depth of a pool before you step into it, but no other special equipment is necessary. Do have plenty of water and trail snacks, though, and you’d be a fool not to bring a camera along, at least on your first visit.

Starting from the trailhead, head up the wide wash for 0.6 mile to the canyons’ confluence. A dry waterfall blocks direct passage at one point, but adventurous people can scramble up it (a short Class 4 pitch), and others can use sandstone ramps on either side of this spot. Most people seem to prefer the ramp on the right. The one on the left is less exposed but has a low overhang that complicates passage.

At the confluence, look for a sign indicating Bell to the left and Little Wild Horse to the right. I completely missed the sign on the way up, and it is easy to miss for a few reasons. First, the sign is hard to see as one approaches it because brush partially blocks the natural line of sight to it. Second, the left fork (Bell) is wider and looks like the obvious choice. Third, there are some rocks at the mouth of the right fork (Little Wild Horse), and they almost seem like barriers indicating a wrong way.

You can take the loop in either direction, but my description goes up Little Wild Horse and down Bell. The narrows in Little Wild Horse are longer and a bit more scenic than those in Bell. However, Bell has more obstacles (chockstones and small pouroffs) that make the route through it slightly more challenging (and fun), though it doesn't have to be harder than Class 3.

For over 2.5 miles, follow Little Wild Horse Canyon. The canyon narrows pretty quickly, and in places it is less than three feet wide. Expect some obstacles and perhaps some pools, but not anything major. After the canyon has opened into a broad wash, look for a sign pointing the route to Bell Canyon. This is a cross-country route that gets you to Behind-the-Reef Road, 3.2 miles from the Bell/Little Wild Horse confluence, closer to Bell than following Little Wild Horse all the way to the road would.

Now hike the road for 1.4 mi, enjoying views of the San Rafael Reef, to a sign for Bell Canyon.

Bell Canyon narrows pretty quickly as well, and it is 1.6 mi to the confluence, but the true narrows last about a mile at most. The toughest obstacle is the first one, a pouroff about 10' high, and you can scramble down next to it on either side (Class 4 on the left and Class 3 on the right, facing down-canyon), or you can notice that a ramp on the right side leads easily to the canyon floor. Other obstacles are no harder than Class 3. That said, I should correct my statement to say that the first obstacle is the hardest if you prefer to take on the obstacles directly instead of seeking workarounds.

Back at the confluence, hike 0.6 mi back to the trailhead. 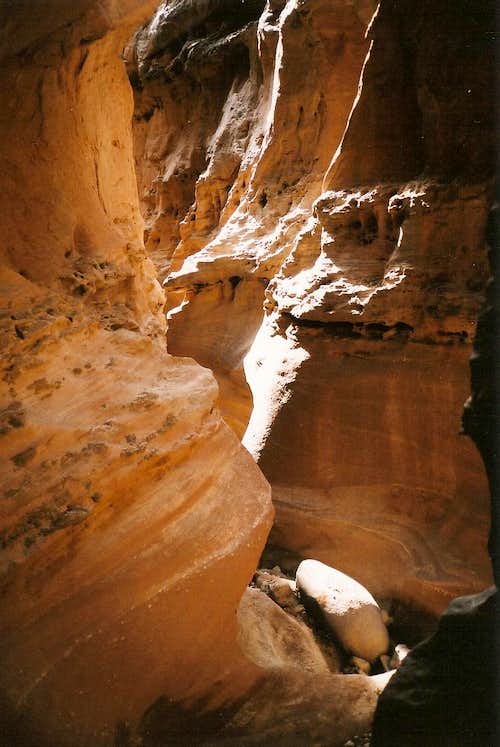 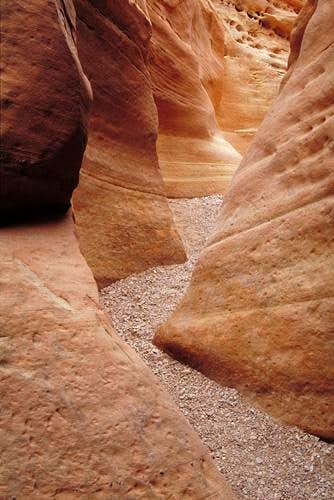 Quieter Way?-- Anyone with a good map of the area will surely notice that from the paved road to Goblin Valley State Park, there is a spur (which soon becomes unpaved) to Temple Mountain. After 2.1 miles on the spur, one can bear left on Behind-the-Reef Road (not signed as such) and follow it for about 10 miles to the upper end of the Little Wild Horse Canyon route or for about 11.5 miles to Bell Canyon. That person will think that he/she can cut 1.2 round-trip miles from the hike and avoid the often-crowded parking lot (and the often-crowded) first 0.6 mi. True, but there is a catch: the road is marked as a 4WD road, normally not a big deal for someone in a truck or SUV, but about 6 miles in, right after the spur to the Chute Canyon TH, there is a section that looks washed out and is in fact recommended only for modified 4WD vehicles. A quick look at the road will confirm why. So, unless you want to destroy your vehicle or have a modified 4-wheeler, you can forget this option.

Note: if you have the Trails Illustrated map for the San Rafael Swell, you will not see this section of the road labeled as such. I learned the hard way during a visit in 2011 and had to backtrack and go to the regular trailhead, turning a day that was nearly an hour ahead of schedule into one that was 30 minutes behind schedule. 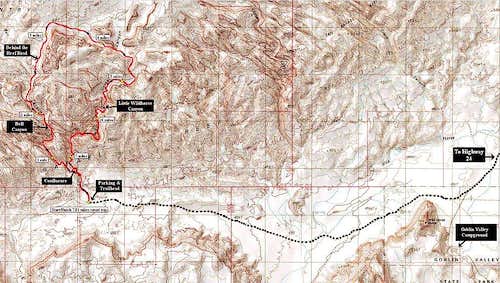 Thanks to Mountain Jim for this.

West of Green River or north of Hanksville, take Highway 24 to the signed turn for Goblin Valley State Park. Eleven miles from the highway, look for a road on the right and follow this road through beautiful San Rafael Swell scenery for about 5 miles, where there is a large parking area. The road was unpaved when I was there in 2006 but now is paved to the parking area, which is the trailhead. Some guidebooks say you can drive up the wash almost to the canyons’ confluence, but this access was blocked when I went in April 2006 and was still blocked in 2011; expect the blockage to be permanent.

Nothing regulatory, but check sky conditions and local forecasts before hiking.

If you crave solitude, avoid this hike on spring and fall weekends and during school vacations—that’s nothing against kids or teachers; I’m a teacher myself.

There is a developed campground at Goblin Valley State Park. A better choice would be to drive beyond the trailhead and pick from any of a number of great sites along the way to Muddy Creek. Have a 4WD vehicle if you plan on going more than a few miles beyond the trailhead, though.