Malta is one of the smallest European countries. It's situated in the middle of the Mediterranean, between Italy and the North African coast, and, when viewed on a bigger scale, about half way on the important east west shipping routes between the Middle East and south west Europe. Over the centuries this prime location has attracted unwanted attention, disrupting peaceful life, bringing wars and sieges. More often than not it was ruled by a foreign power, from the ancient Romans to the recent British. In 1964, Malta became independent, peacefully. These days it is a thriving country, prospering from an influx of people and money, especially after joining the European Union in 2004, and adopting the Euro a few years later. 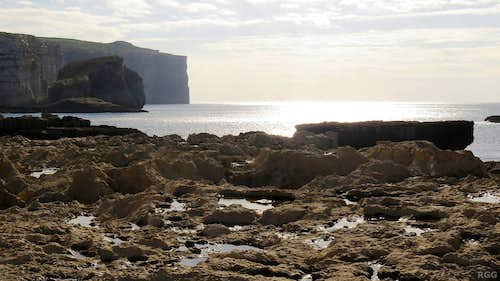 Gozo coastline south of Dwejra Bay.
The dark shape on the left is the 60 m high Fungus Rock.

The country of Malta has three inhabited islands: Malta, Gozo (or Għawdex in the local Maltese language) and Comino (Kemmuna). In addition there are a number of tiny uninhabited islands, the best known ones being Filfla, which requires special permission to visit, Fungus Rock (Il-Ġebla tal-Ġeneral), a nature reserve, and St Paul's Island (Il-Gżejjer ta' San Pawl). 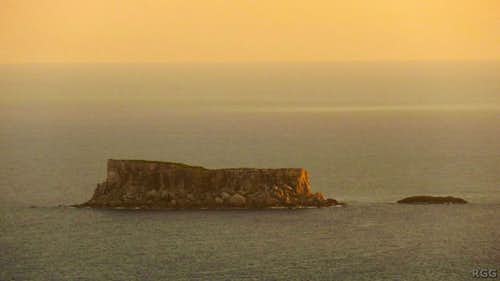 Zooming in on Filfla island from Dingli Cliffs 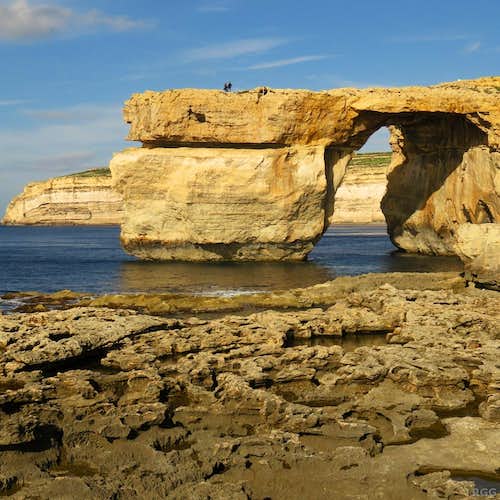 The Azure Window was Gozo's best known natural feature. Climbing on it was already forbidden when it finally collapsed in March 2017.
The coast is varied, with natural harbors, alluring beaches and steep cliffs. Most of the inland countryside is fairly flat or gentle hills, but there are some canyons and escarpments as well. Together with the steep coastal cliffs these make Malta a great rock climbing destination, both traditional and on bolted routes.

There are no mountains on the islands, but it's possible to hike and even drive up some of the gentle hills. The highest point, Ta'Dmejrek, is just 253 m high, and right by the side of the road.

Though the winter months statistically bring more precipitation, Malta has a fairly dry climate. Stated differently, winter brings some rainfall, in what I would call normal amounts, while summers are dry. We arrived during a rainy spell in December, and didn't climb for a few days because the rocks were wet. But after that we enjoyed a prolonged period of good weather and could climb for days on end.

Being surrounded by the Mediterranean means the climate isn't extreme, but its southern location means it's never cold, not even mid winter. The best periods for most people will be spring and autumn. It can get hot in summer, but the sea is never far away, and many cliffs are suitable for deep water soloing. And there are fantastic diving opportunities off the coast, with geological formations, reefs and shipwrecks. 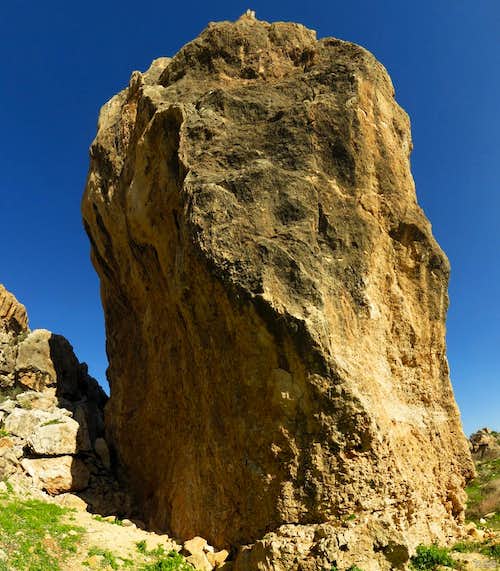 Map of the Maltese archipelago. Click here for a larger version 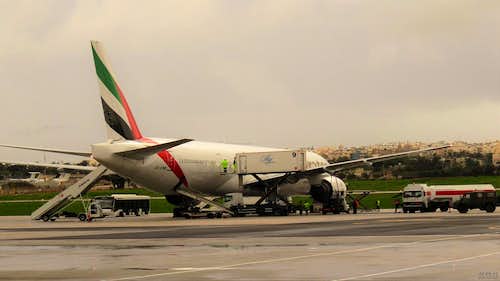 Most visitors arrive by air, at Luqa airport. There are good connections to most major European airports as well as a number of smaller Italian ones. The main airlines servicing the country are Air Malta and Ryanair.

Malta has a large natural sea port at Valetta, the capital, important for trade as well as for cruise ships. Furthermore there are several ferries servicing Malta, which is especially useful if you want to bring your own car. 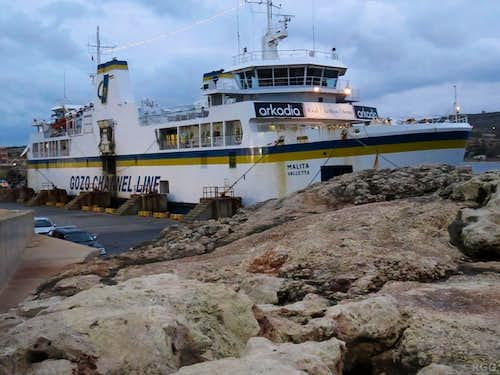 Local ferries operate frequently between Malta and Gozo as well as Camino, and there buses all over Malta and Gozo. If you want to enjoy greater independence, consider renting a car. In the quiet season prices are real low. 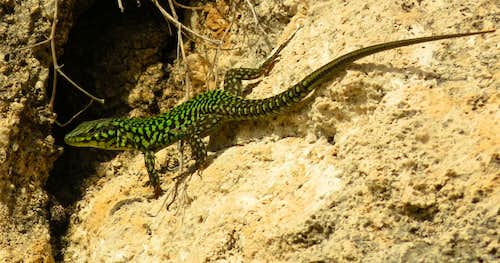 Maltese Wall Lizard, a protected species
None for hiking and climbing (unless you want to bolt a route; you'll have to ask first), but wild camping requires a permit which isn't easy to get. 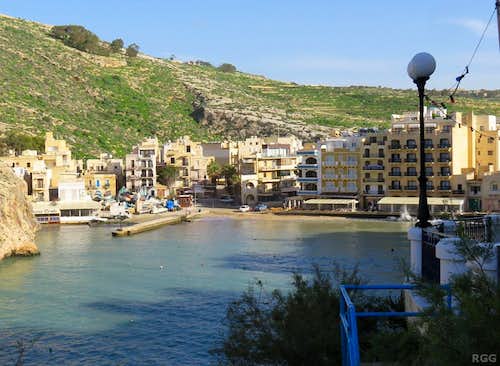 Xlendi, a popular base for divers, but quiet in winter
Tourism is an important economic factor and consequently there are lots of accommodation options, ranging from simple hostels to upscale hotels. That said, in winter there are few tourists and therefore some accommodations close shop and others lower their prices, sometimes drastically.

There are a couple of camp grounds, and with the right permit you can camp wild as well. Overall population density is high though, so, except on the island of Comino, outside the low season it's not all that easy to find a quiet private spot. Although we brought camping gear, we never did camp because it was so easy to find cheap accommodation.

The most private place for camping that we came across was Munxar Valley. We came to explore the small collection of bolted routes down there, but the climbing wasn't all that good. To get down there we had to rappel; the only alternative access would require some serious bushwhacking, with at least a sharp machete. There was no running stream, just damp soil. On the plus side, there are caves, so a tent isn't necessary.

There are literally thousands of climbing routes on the islands in all grades. Classic traditional routes are left as they are, but there are lots of bolted routes as well, and new ones are added regularly.

There are some inland crags, but the majority is at or near the coast. A short and, admittedly, somewhat arbitrary selection:

A short ravine leading to the sea (and the touristy Blue Grotto), located on the south coast of the main island, with a great number of bolted routes as well as traditional ones. Click here for a map.

More to the point, the adjoining crags of Monolith Buttress, The Wave and Crucifix Cave, which make up a small inland climbing area in the northern part of the main island that offers a bit of shelter if the weather on the coast is rough. Click here for a map.

A hidden gem this canyon on Gozo, with lots of short routes. Click here for a map.

My personal favorite: There are about ten bolted routes on the seaside pillar of the arch, and dozens more on either side of the walls of the ravine right next to it. Click here for a map. 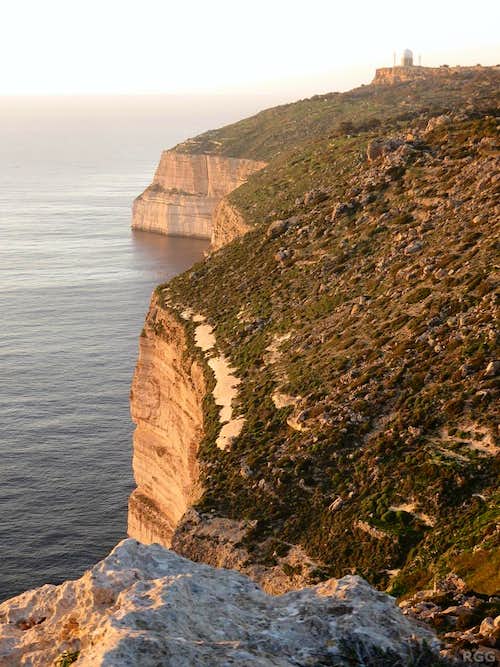 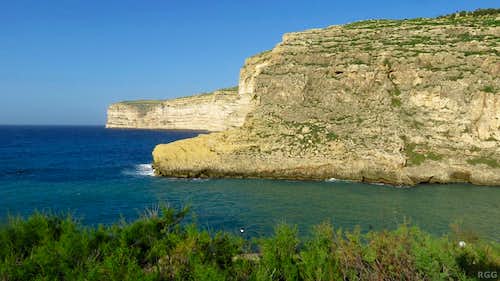 The cliffs west of Xlendi Bay, Gozo
On the main island, Malta, the capital Valletta and the surrounding towns have grown together to form one large urban area on the northeast coast. In contrast, the west and south coastal areas are much less developed, which is understandable considering that there are lots of seaside cliffs. There are fine hiking opportunities more or less along the coast, high up on the cliffs.

Gozo is less populated than the main island. Gozo's capital, Victoria (Ir-Rabat in Maltese), lies in the center. Most of the coast line is spectacular and it is possible to hike along most of it.

The best map we had was the Malta & Gozo Road Map we got with our rental from Goldcar, scale 1:30 000. It isn't detailed enough for getting around in Valletta and the surrounding urban area, but for the rest of the country it's fine. In the corner of the map it says © Freytag&Berndt, a well known map maker in Europe. On their site they describe their own Malta & Gozo road map, scale 1:30 000, which, in addition to the map itself, has tourist information and city maps.

An alternative is the Malta & Gozo Holiday Map by Marco Polo, scale 1:50 000. On the back is a detailed map of Valetta, but for the surrounding urban area the map isn't detailed enough.

A small, handy book is "The Adventure Guidebook to the Maltese Islands" by Xavier Hancock, ISBN 978-99932-0-643-9. In addition to general information, it has chapters on diving, climbing, bouldering, deep water soloing, biking and hiking. If you plan to do different activities, this is a nice book to get ideas, and it has enough details for a few days of everything. However, if you plan to focus on one or two activities, this book isn't enough.