Satellite view, centered on the highest point.
Click here for a larger version
At 253 m, Ta'Dmejrek is the highpoint of the Republic of Malta. Located on the main island of the country, also called Malta, it's not a mountain; I wouldn't even call it a hill. It's just a small plateau, most of which is occupied by a quarry for building materials - which implies that what is the highest point right now might one day be dug up to sell the sand or limestone below it. The quarry is easily recognizable on Satellite View.Ta'Dmejrek is an underwhelming place to visit. The quarry doesn't help with the scenery, and, being a plateau, the summit views are not what you might expect from the highest point of a small island. However, as if to make up for that, immediately south of the plateau lies a dramatic coastline with the sheer Dingli Cliffs, a great site and perhaps the best place to watch the sunset, at least in winter.

The highest point is just a few meters north of the coastal road, Triq Panoramika - the name says it all. 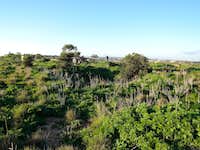 On top of one of the candidates 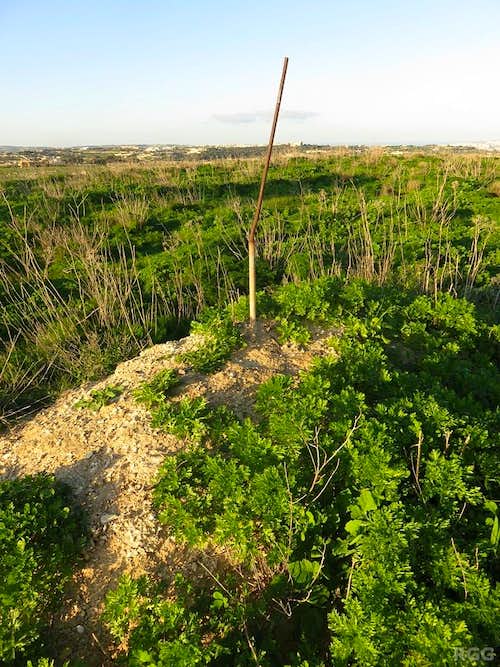 Candidate with a pole

Finding Ta'Dmejrek is easy, finding the actual summit is a bit of a puzzle. There are no signs. There are a number of small bumps on the area by the side of the road that, at first sight, all look like plausible candidates. I simply went to all of them. On the first one I took pictures in all directions so I could stitch them into a 360° panorama later. Another one even had a rusty pole on it, as if to mark it.

Afterwards I decided to contact the Department of Geography of the University of Malta to figure out which one was the highest. Based on their information I concluded that it was close to the first one I stood on, not the one with the pole.

Map of Malta, centered on Ta'Dmejrek.
Click here for a larger version

Most visitors arrive by air, at Luqa airport. There are good connections to most major European airports as well as a number of smaller Italian ones. The main airlines servicing the country are Air Malta and Ryanair.

Malta has a large natural sea port, The Grand Harbour, right next to the tiny capital of Valletta. The whole area around the port is built up. There are several ferries servicing Malta, which can be especially useful if you want to bring your own car.

Malta is a small island. The highpoint is 12 km from the airport and 13 km from the Grand Harbour ferry terminal so it's quite feasible to walk, but for the most part the scenery isn't worth it.

The nearest bus stop (visible in Satellite view) is called Zuta, on Triq Panoramika, half a kilometer east of the actual highpoint (and almost the same elevation). According to Malta Public Transport it is serviced by bus 201 connecting the airport with Ir-Rabat and passing through Ħad-Dingli, the nearest town.

There is (free) parking space along the road, to accommodate visitors for the Dingli Cliffs. Few tourists come in winter, the low season, which means that there is plenty of room to park, and rental cars are cheap.

Entrance to the quarry 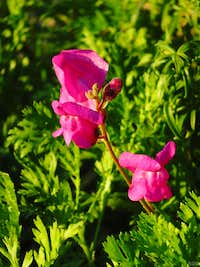 A flower in the buffer zone north of the road
The quarry is a private enterprise, but I don't know if the area immediately around the highpoint belongs to it or not.

The actual entrance of the quarry at Triq Panoramika was closed off with a simple chain, but there is no barrier between the road and the highpoint, the land right around it isn't developed and there are no signs.

In 2015 the local Planning Authority published a map outlining a small increase in the area that may be quarried. South of the quarry, it designates the cliffs as an "Area of Ecological Importance" and the area between the quarry and the cliffs, including the highpoint, as a buffer zone.

In normal English that means developing it is not permitted or strictly controlled, which gives the highpoint some protection against destruction. Nevertheless there is a small, old building close to the highpoint in the buffer zone. Furthermore, Triq Panoramika, which is obviously a significant development, already dissects the buffer. I can imagine that at some point the buffer area will be reduced to the area south of the road, allowing for development of the whole area north of it. 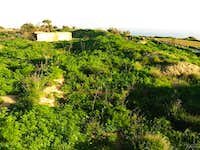 Small building in the buffer zone, close to the highpoint 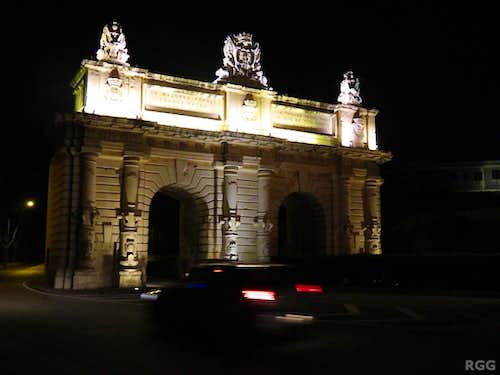 Porte des Bombes, Floriana
If you're in a hurry and your only goal is to visit the country highpoint, you don't need accommodation: the quickest way is to fly in and out on the same day and take a taxi from the airport. Without traffic it's a 15 minute drive (one way). The drive is mostly in the countryside so even with some traffic it shouldn't take all that much longer. Ideally, it could take less than an hour from the airport and back, but would you really want to plan it that tight? Just imagine that your incoming flight arrives late, then your plans are easily derailed. And Malta has a lot to offer, so why not stay at least a few more days?

Since it's a small island, you can stay anywhere on Malta. Apart from outdoor activities, you can go shopping in Sliema, watch the historic architecture in and around Valletta, sample the night life of St Julians. There is plenty to do.

The many accommodation options range from cheap hostels to expensive hotels. The first night of our visit we had booked at Boho Hostel. I had some trouble actually finding it - in the built-up area around the capital the road patterns are rather chaotic - but once I got there, it proved to be a nice, relaxed place and we stayed a few more nights. 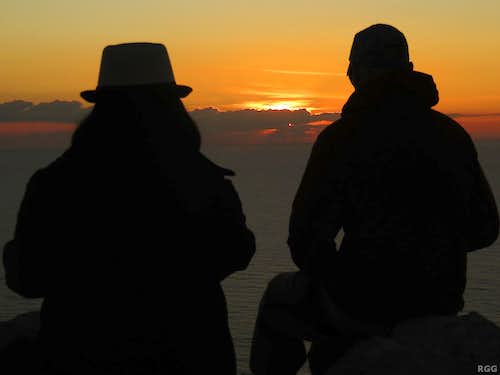 Watching the sunset at Dingli Cliffs