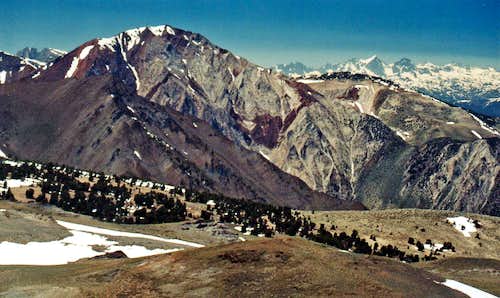 Laurel Mtn. and the Ritter Range from McGee Mtn.
McGee Mountain is a large rather flat-top scarp mountain in the Eastern Sierra south of Mammoth Lakes a few miles west of Lake Crowley. It is bordered by Convict Creek to the northwest and McGee Creek to the south and acts as something of a visual barrier to the higher peaks Mount Baldwin, White Fang and Mount Morrison from Highway 395 to the east. The locals have skied the peak for years and there is a quite challenging 4WD road that switchbacks up the north slope from Tobacco Flat to the large hanging valley a few hundred feet below the summit for the few who are rigged to handle the terrain.
The northwest and south slopes are class 2.

Starting with the colorful Sevehah Cliff on the east face of Laurel Mountain there is an expansive view northwest emcompassing the Ritter Range and the big peaks west of Mono Lake. To the south is the impressive Nevahbe Ridge directly over Mc Gee Canyon. To the southwest the views include Mount Crocker, Red Slate Mountain, Mount Baldwin, White Fang and Mount Morrison. 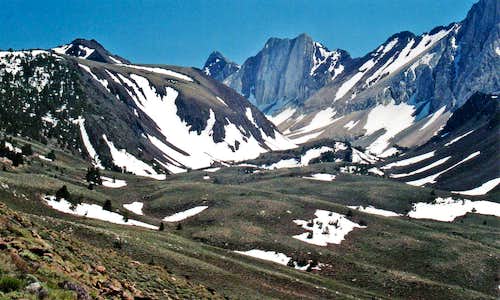 Scramble south about 500 verticle ft. up a sagebrush moraine into the hanging valley between Mono Jim Peak (the dark brown peak in front of Mt. Morrison) and McGee Mountain. Hike about a mile south up the valley and ascend the northwest slope to the big upper hanging valley. Continue another 1.3 miles southeast to the peak.

Ascend the south slope 1.5 miles starting with relatively stable sandy sagebrush and on up to the plateau at 10,470'. Go east .5 miles to the summit. 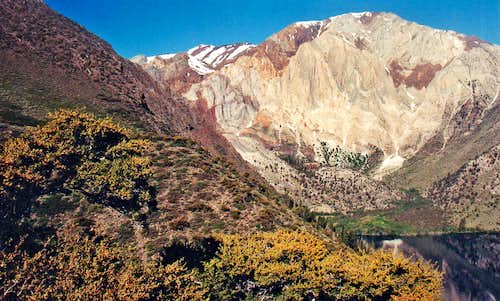 Laurel Mtn from Convict Lake area
The mountain is on the border of the John Muir Wilderness and the Inyo National Forest. No permits are required to hike this peak. 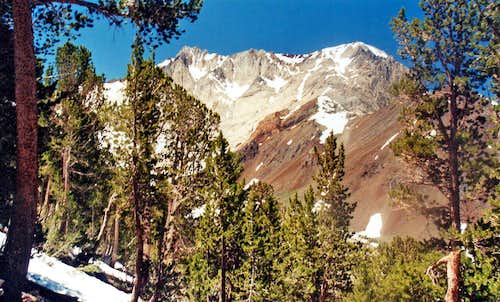 Three McGee brothers, Alney, John, and Bart were pioneer cattlemen in Mono and Inyo counties. This McGee Creek was named for Alney Lee McGee. All these other "McGee" names probably are derived from the creek. The creek and the mountain are named on the first Mt. Morrison and Mt. Goddard 30-minute maps.,1914 and 1912 respectively. (Robert M. Harper, great grand nephew of Alney Lee McGee.) (INF)
Place Names of the SIerra Nevada by Peter Browning