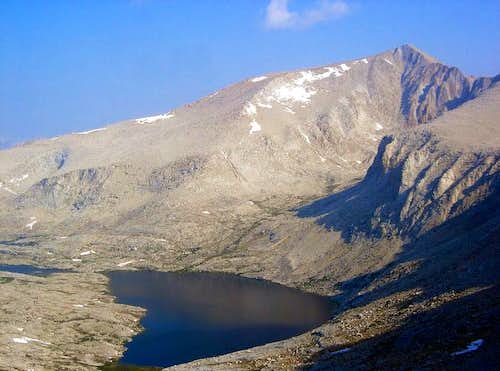 Mount Barnard above Wallace Lake in July
If it could stand on its tiptoes, Mount Barnard would be California's sixteenth 14er. Instead, at 13,990', it is the closest runner-up, making it the 68th highest peak in the contiguous United States. Mount Barnard is located on the Sierra Crest in a stunningly beautiful area between Wright Lakes and Wallace Basins and is in both Sequoia National Park and the John Muir Wilderness in Inyo National Forest. Yet despite the peak’s height, proximity to the John Muir Trail & outstanding setting, Mt. Barnard is climbed infrequently and often overlooked.

This was not always the case. Earlier in the 20th century, Mt. Barnard was a more popular climb because it was originally measured as a 14er. Later, the U.S Geological survey remeasured Mount Barnard and concluded that its height was “only” 13,990 feet, which of course greatly displeased many climbers.

Mount Barnard was first climbed on September 25, 1892 by John Hunter, William Hunter, W.L. Hunter and C. Mulholland.  Most climbers probably use one of the class 2 routes, which involve some talus and scree slogging, and includes approaching via George Creek or the North Fork of Lone Pine Creek, or a traverse from Trojan Peak.  There are also four technical routes: the Northwest Face (III, 5.8), East Dihedral (III, 5.10a), East Pillar (III, 5.9) and Shaw Spire (III, 5.8). 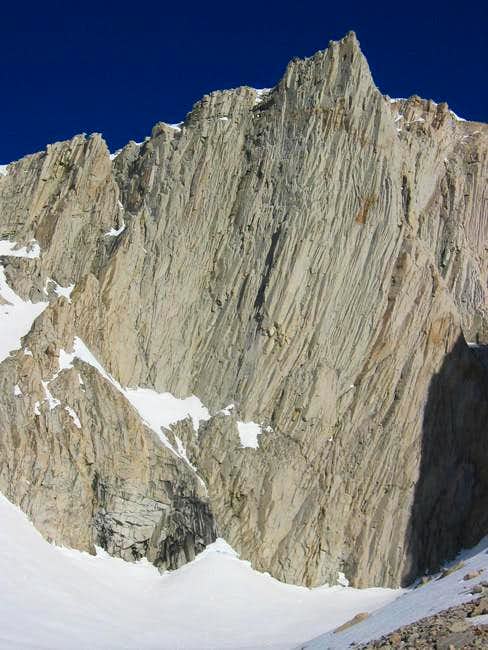 Shepherd Pass: To get to Shepherd Pass, drive to Independence. From Independence, head west on Market Street for 4.2 miles. Turn left on Foothill Road, which is a gravel road. After driving on Foothill Road for 2.7 miles, you will pass a sign with a hiker symbol on the right and a “Symmes Creek” sign in the center. Keep left and continue for another 0.5 mile. Then, turn right at the intersection where the sign says “Shepherd Pass Trailhead.” Drive another 1.4 miles along a rough gravel road (but still passable with a low-clearance 2wd vehicle) until reaching the trailhead. From the Shepherd Pass Trailhead, hike up for 11 miles to the top of the pass. Then, hike down another 4.2 miles to the junction with the John Muir Trail. Proceed south (left) down the John Muir Trail for 4.7 miles until reaching the north side of Wallace Creek.
Directions up Wallace Creek:
Beautiful Wallace Basin is an easy four mile hike from the John Muir Trail. Despite its proximity to the John Muir Trail, it receives few visitors. Wallace Lake in Wallace Basin is below Mt. Barnard’s southern slopes and is a nice place to camp or kill a day. A good use trail follows Wallace Creek from the John Muir Trail, starting on the north side of the creek. There are also many other great places to camp along Wallace Creek before reaching Wallace Lake.

George Creek: This eastside approach would be among the shortest--approximately 7 miles. I have not taken this approach so I cannot describe it. See this trip report of the George Creek route up Mount Carl Heller or see The High Sierra: Peaks, Passes, and Trails by RJ Secor. 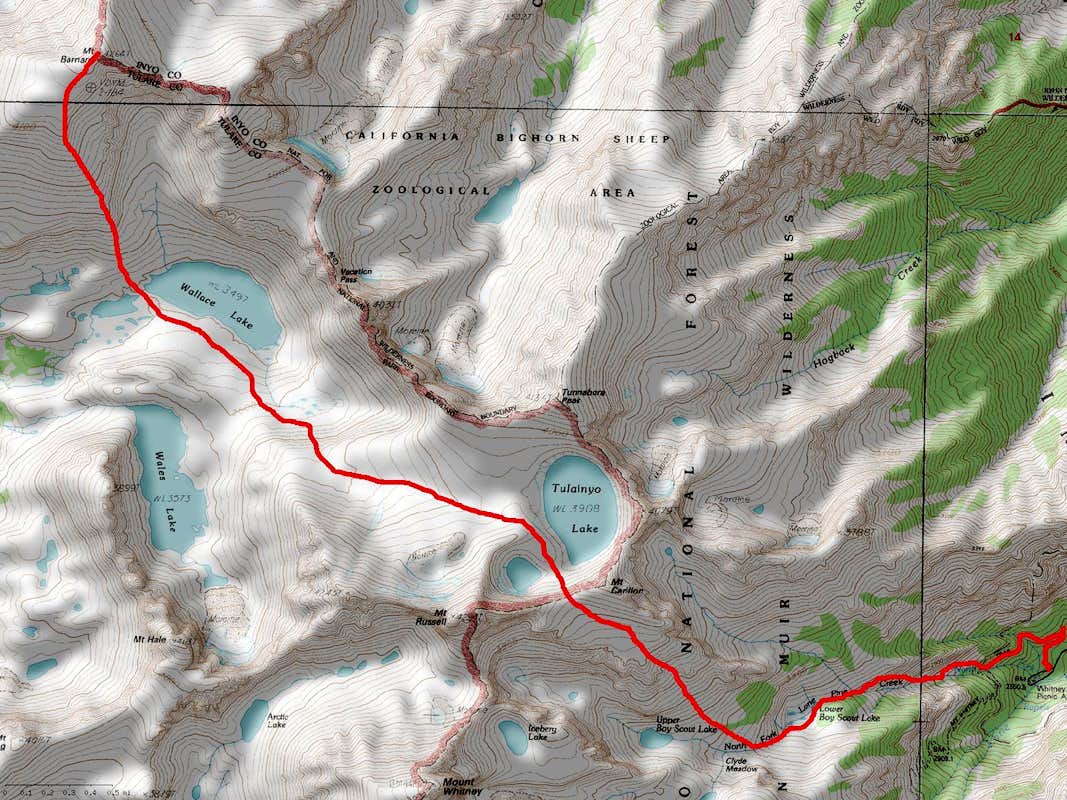 Thanks to The Chief and others, the Bighorn closure is no longer in effect as of December 1, 2010.  Access is open to this area year round.
Wilderness permits are required for overnight visits from Inyo National Forest. Permits can be reserved in advance for $5/person, which is recommended, especially for weekends and holidays, because most Inyo National Forest trailheads are subject to use quotas. Overnight Whitney Zone entry permits are notoriously difficult to obtain and should, if possible, be reserved several months in advance. They cost $15/person to reserve. There is no fee for permits if they are not reserved in advance.

May-October are usually the best months to climb Mount Barnard.

Mount Barnard was named by its first ascent party: W.L., John and William Hunter and C. Mulholland. The name Mount Barnard was in honor of the Mount Hamilton astronomer, Edward Barnard (1857-1923).