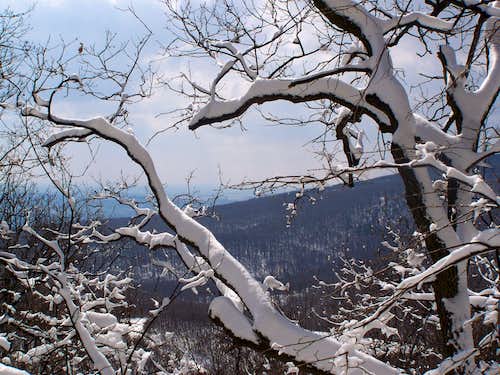 Mecsek is a pleasant hiking destination, with dense network of tourist paths. As I live here, I do shorter or longer hikes every week in this beautiful mountain. Perhaps this album raises your interest to visit this area, too

Parts of the mountain 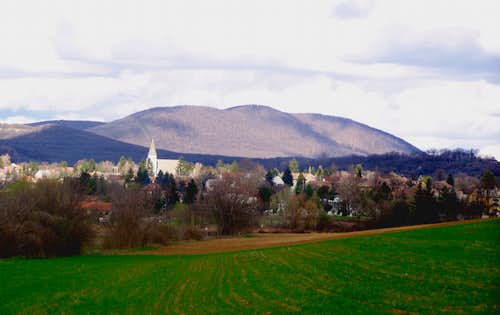 Hármas-hegy
The mountain is stretching from west to east in 46 km length. Its average width is 10-12 km.

Geographically the mountain is divided into 3 parts, and they are called - what a surprise - Western Mecsek (Nyugati-Mecsek), Middle Mecsek (Közép-Mecsek) and Eastern Mecsek (Keleti-Mecsek).

Geologically a 4th part east to the mountain is considered as an appendix of the mountain, because the minor hills here are built of the same rocks as the mountain itself. This land of hills is called Mórágyi-rög. But others than people studying geology cannot differentiate these flat hills built of granite from the neighbouring other hills built of clay. 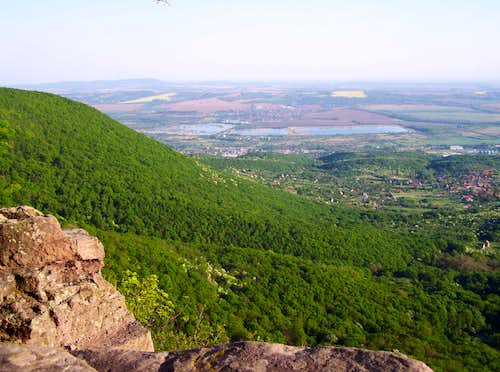 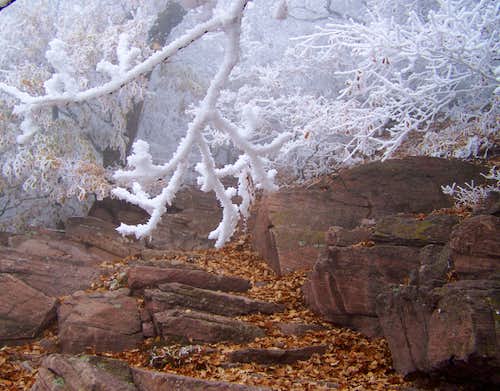 The highest point of the hill is a relatively flat summit in the middle of the forest. No path is leading there. Not easy to find it. I hardly believe that many tourists have ever been there.

There is another peak of Jakab-hegy that is thought by many people being the highest point of the hill. It's called István-kilátó (592 m), with a lookuot tower on the top. The tower was built in 1892. Today it is in ruins, and it's life hazardous to go up. Last time I dared to ascend it 2 years ago.

The best known lookout point of the hill is called Zsongor-kő (540 m). It's a natural lookout point, a red rock formation, that has been converted into a safe tourist place in 1892. In the iron handrail of the construction still you can see some engraved "graffities" from the 19th century!

The next chapter in the history of the hill started in 1225 when a monastery was founded here - on the top of the hill, within the fortified area. The monastery was the first centre of the Hungarian-based order of Paulians. The monastery was abandoned in 1784 and collapsed in the next decades. In 1947 the order started to build a new monastery 100 mter far from the old one, but in 1951 they had to give up the work without ever completing it: the communist rule didn't allow these activities.

Rózsa-hegy (528 m)
The second highest hill of Westen Mecsek. It is built of limestone. Though an important tourist path (called Rockenbauer Pál kéktúra)) crosses it, there is no marked tourist path leading to the summit. Consequently hardly any tourist know this peak. I still often visit it.

The southern part of Baranya-county was occupied by the Yugoslavian army between November 1918 and August 1921. The border was here on the ridge of the hill. Illegal border crossing was usual here at that time. 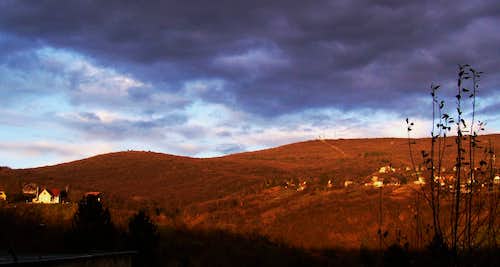 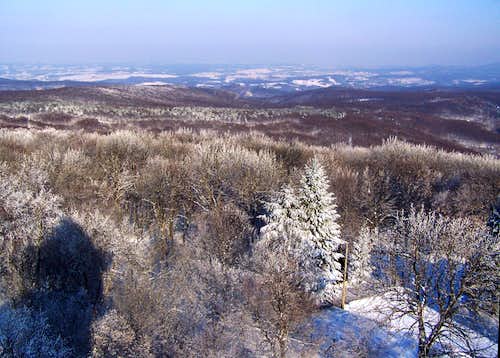 View from Nagy-Tubes
Nagy-Tubes (612 m)
The hill is built of Triassic age limestone. This is the highest point of the Middle Mecsek. It seems that there is a constant struggle between military and civil life for the peak. In 1910 a lookout tower was built here - for tourists. In 1981 the tower was destroyed because a military base has been implemented here. A new tower has been built in 2001 for the tourists,from the funds of local citizens. But in the same year it has been decided by politicians that a NATO radar station would be built here. The fight is constant between the civil movements and the Ministry of Defence. In this moment the civil movement seems to be the winner.

The peak is a very good lookout point. In good weather youy can see as far as Badacsony at the Balaton lake. It is in 100 km distance.

On the southwestern slope called Lapis there was a hunting-lodge (Jagdhaus). The hous was pulled down by Soviet tanks in 1956. Not without reasons! After the Soviet army occupied Hungary in November 1956, the only place where there was armed guerilla resistance against the Soviet army was here in the forests of Mecsek. Resistance for further 12 days. Hand guns versus tanks.

Kis-Tubes (581 m)
It's a sub-peak of Nagy-Tubes. Still I have to mention it because of the lookout "tower" built in 1959. The architect - Tibor Kiss - designed an excellent construction that is in full harmony with the nature around.

Misina (534 m)
The hill is built of Triassic age limestone. This is the best known hill of Mountain Mecsek. It is just above the inner city of Pécs. Its importance is increased by the TV Tower on its top. The tower is 176 m high, and tourists can go up to 70 meter to enjoy the panoramic view or to have a lunch up there in the restaurant. Unfortunately the TV Tower was built on the site of a historic lookout tower that was there since 1908.

A small part of the southern slope of the hill is built of fillit. What a coincidence: the episcopial cathedral of the city Pécs, having the oldest history among all standing buildings of the city - was built onto the rock that is the oldest from geological point of view.

Köves-tető (463 m)
A very exciting place of the mountain. The peak itself is a volcanic from Cretaceous age, and it's material is the volcanic rock called Fonolit. This is the only place where you find Fonolit in Hungary. South and north to the hill there are Jurassic age coal fields that were intensively mined during the 19th and 20th century. And only 1 km northwest to Köves-tető we already find Miocene age andesite - the visible traces of some not so old (21-22 Million years) volcanic activities.

The peak itself is a nature reserve area. 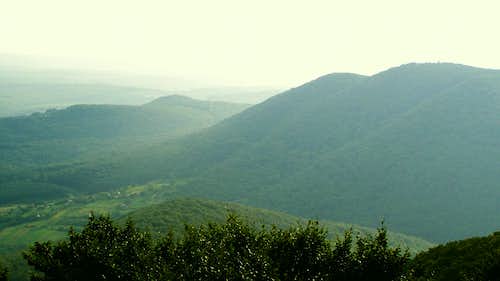 View of Hármas-hegy from Zengő 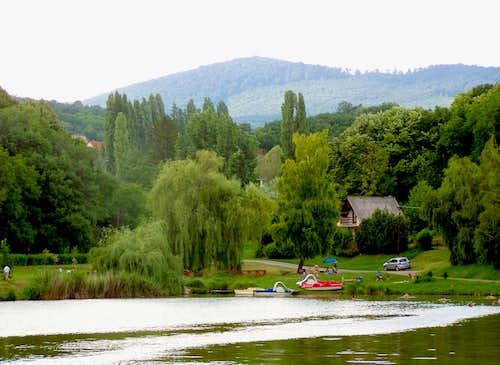 Zengő - the highest mountain of Mecsek
Zengő (682 m)
Old name of the hill is "Vas-hegy". The highest peak of the whole mountain! And county highpoint of Baranya.

The hill is built of lime-rich mudstone.

One of the first monasteries of Hungary was built on the southern slope of the hill in 1015. The monastery was converted into a fortification around 1400, and it had 200 guards. Despite this the Turkish army occupied it in 1543, and they kept it in possession until 1686. The city around the castle is called Pécsvárad.

There are some minor remains of a medieval castle on the very top of the hill, too: wall remains of a round tower and the trenches of the castle.

It's a nature reserve area. This helped the civil movements to achieve their goals that the idea of building a NATO military radar station was given up here.

Hármas-hegy (603 m)
It Latin it woul be named Trimontium. It has three "well-arranged" peaks. A meteorogical station on the highest peak. Anyway it is the second highest point of Eastern-Mecsek. It's a nature reserve area.

Dobogó (594 m)
County highpoint of Tolna. A small monument reminds the tourists to this fact. It's a nature reserve area.

3 km west to the peak you can find the castle called Máré-vár. It was built in the 13th century. In 1543 it was occupied by the Turkish army. But the Hungarian forces took it back in 1561. Not much later it collapsed due to an explosion.

Somlyó (572 m)
One of the rare volcanic hills of Mecsek, from the Cretaceous age. It's a nature reserve area. 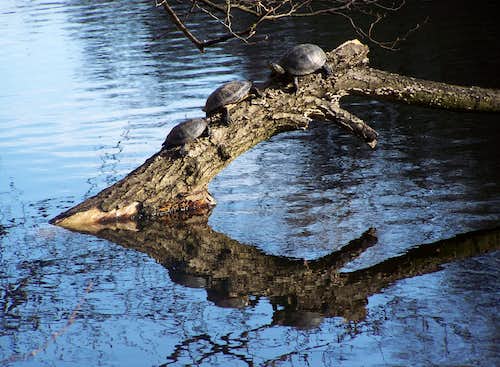 Instead of using words I attached some nice photos... 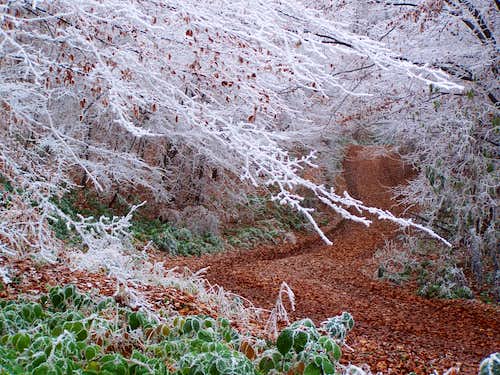 Old carriageway
Hungarians arrived here in 896. Even now the majority of the population is Hungarian.

Germans tribes (Goths and Langobards) occupied the area between 455 and 568. During 9th century the Eastern Frank empire occupied the area, so some German speaking people may have returned. In the middle ages surely there were German-speaking citizens in the city of Pécs, together with Hungrians. But at that time all villages were Hunagrian around. At the beginning of the 18th century an intensive German migration started to the area of Mecsek, and as a result their ratio reached or even exceeded 50% in the total population. The number of German population dropped after WWII, but it's still considerable.

Today there are no Serbs in Mecsek any more. But during the Turkish occupation they consisted an important element of the occupying forces of the fortresses (like the city Pécs). After the Turkish army left Hungary, Serbs remained only in 3 villages in Mecsek: in Rácváros, in Hidas and in Erdősmecske. In Erdösmecske their church still stands - though there are no Serbs in the village any more.

Gipsies. In Hungary approximately 8% of the population is Gipsy. In average it must be true in the villages of Mecsek, too.