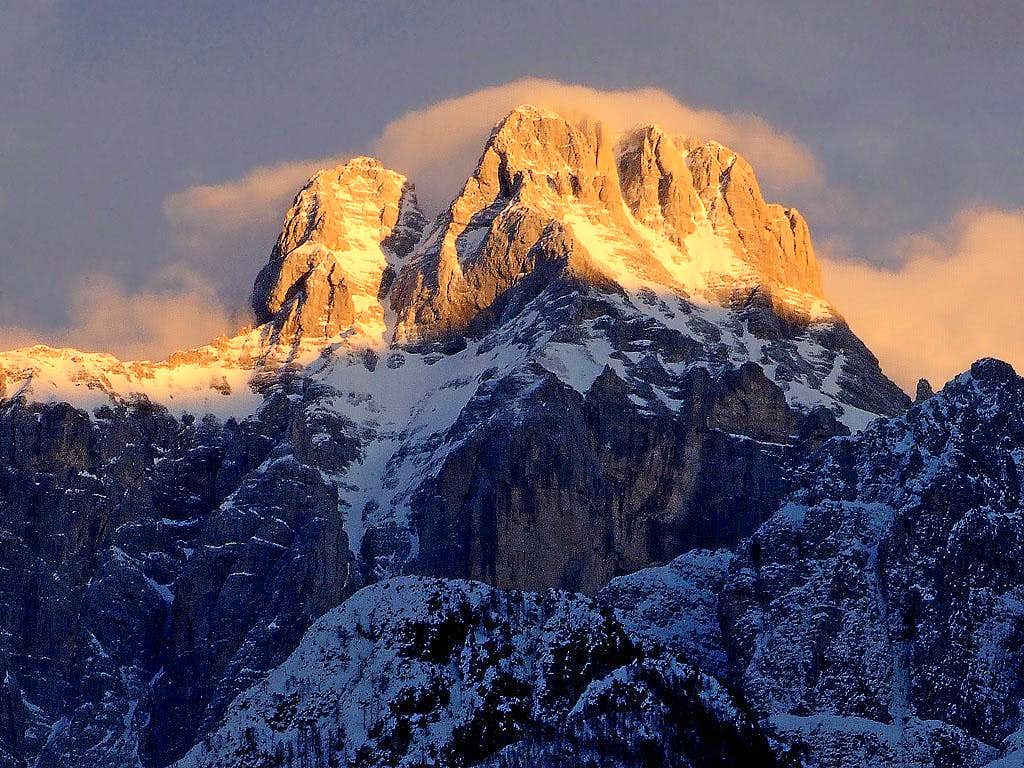 Only the summit of Montaž is still receiving the evening light. Above the Great ledge, crossing its whole mighty western wall, first Torre Nord / Nordturm is rising, then the whole summit fortress. In the centre of the latter Findenegg couloir is nicely seen, leading from the bivouac just on the summit ridge. Februar 11th, 2007.
« PREV NEXT »

Thanks, Samere! Actually I went on this ski tour only to see Montaz from the West. But it was hiding in clouds all the day and revealed its face only for the last sun rays. That was my best reward :)

Yes, Montaz from the west is one of the finest scenes in Julian Alps.

Finally you caught it right!!! :-) Great shot, fantastic! All those years of trying finally paid off :-)

Soon I'll post the summit of Lipnik, but there's only one winter scene, showing Montaz, when it showed shortly. I'll come next time on the neighbouring summit.

Sasa, I still owe you that book of Kugy. I must find time to copy it. There it is, where all this with Montaz started. He describes it so beautifully: How they were allways sitting in the train, ... but when it reached Dunja valley, just for a few seconds, everybody rushed to the window, to catch a short glimpse on a heavenly beautiful scene of a mountain, rising unearthly to the sky, ... and in a few seconds, ... the train enters a tunnel and the scene is over...

Great description of the brief experience of seeing Montaz from Kanalska Dolina! I feel the same every time I pass there. But never had time to go into Dunja :-( I would be thankful for the copy of that book!

And there is nothing about this photo I find unsatisfying :-) It's perfect! Can it be better?! Surely weather can arrange even more stunning scene but to catch it you would have to live there! :-) I think this was the great reward for all your efforts!

Thank you for this first class photo!

You're welcome, Klaus :)
Recently I'm experimenting a bit with HDR photography. So, for a big picture of Montaz scene that evening, I posted this (HDR) picture. Interestingly it passed almost unnoticed. But it's a very darkened HDR.

So you used more than one picture (by means of a tripod?) to create this one?
Anyway the result is great and I should try this technique.

Not this one - where only the summit is, but the other one, where you see the whole mountain. I have only a very small tripod, which goes with me on a mountain. So, if I switch buttons, the pictures are not the same any more - it moves a bit. But using a 'bracketing' function on my camera I can take 3 consecutive photos. Usually one is under and one is overexposed. These 3 pictures, combined then into HDR are giving some effect, although in some cases the scene is unnatural. But colours are quite vivid and big contrasts can be overcomed. Then, I have the problem of converting that HDR into an ordinary .jpg - because I again lose some of these effects. For mountain scenes HDR is perhaps less useful.

Hm? I don't get your thoughts, Marija. The color matches the name... Orange, golden, yellow, red - and Montaz (It's Montazh). Hm?