Monte Brione 374 m falls steeply on the shores of Garda Lake near the Forte San Nicolò and creeps like a long rocky wedge in the Sarca plain between Riva del Garda and Arco. On the East side overlooking the Valle di Linfano and the village of Torbole, it shows a vertical rock wall about 200 m high formed by friable limestones, while on the west side it slopes gently with woods and olive groves towards Riva. The particular conformation of the mountain allows the performance of a profitable ring following a stretch of the Sentiero della Pace, a path 520 km long starting from Passo del Tonale and reaching the Marmolada, across the front line of the WWI (Great War). Uphill the itinerary climbs up without any difficulty and with breathtaking views along a panoramic path located on the large ridge that dominates the rocky wall facing East, while downhill it follows the gentle vegetated slopes located to the west, bringing back to the starting point.

This itinerary has a strong naturalistic, panoramic and above all historical interest. In fact, due to its dominant position and being located near the border with Italy, Monte Brione was transformed by the Austro-Hungarian Empire into an impregnable fortress between 1860 and the beginning of the WWI. Some majestic forts were built on the mountain with the aim of monitoring the northern part of the lake: with the construction of three fortresses between 1860 and the beginning of the WWI: in addition to the Forte San Nicolò where it begins the route, the Forte Garda, the Batteria di Mezzo and the Forte S. Alessandro. These fortifications are still intact and can be visited during the ascent.

The itinerary start from porto San Nicolò, a hamlet of Riva del Garda (TN), where it's situated the lowest fortress, Forte San Nicolò,   just before the tunnel that leads from Riva to Torbole. You can park your car in the nearby parking lot in via Brione.

Behind the Forte San Nicolò it starts a staircase that connects to the beginning of the path to Monte Brione near an ancient pink-colored villa. The trail begins to climb steeply immediately, giving beautiful views of Lake Garda. The path alternates stretches on dirt ground and steps along the way and is protected by a metal cord on the side of the exposed East face. There are several panoramic points where you can stop and admire the splendid view of the lake, the surrounding mountains and a panorama overlooking Torbole and Linfano. In about 20-30 minutes of steep climb with breathtaking views you reach the second fortress: Forte Garda, a mighty building well camouflaged with the surrounding environment and partly dug into the rock.

After about 30 minutes of walking you reach the Batteria di Mezzo, another majestic fortress of which it is possible to reach the large roof. Here the views of the surrounding landscape are more and more extensive. During the war this fort was equipped with a long tunnel that came out with an observatory and cannons on the overhanging east wall of Mount Brione.

From the Batteria di Mezzo in a few minutes you reach the big cross, which is located below the culminating point of the mountain. Going beyond the cross, you reach the summit antennas and the mule track to Forte Sant'Alessandro (North Battery), built at the northern end of the mountain. We can see only some ruins immersed in the vegetation. 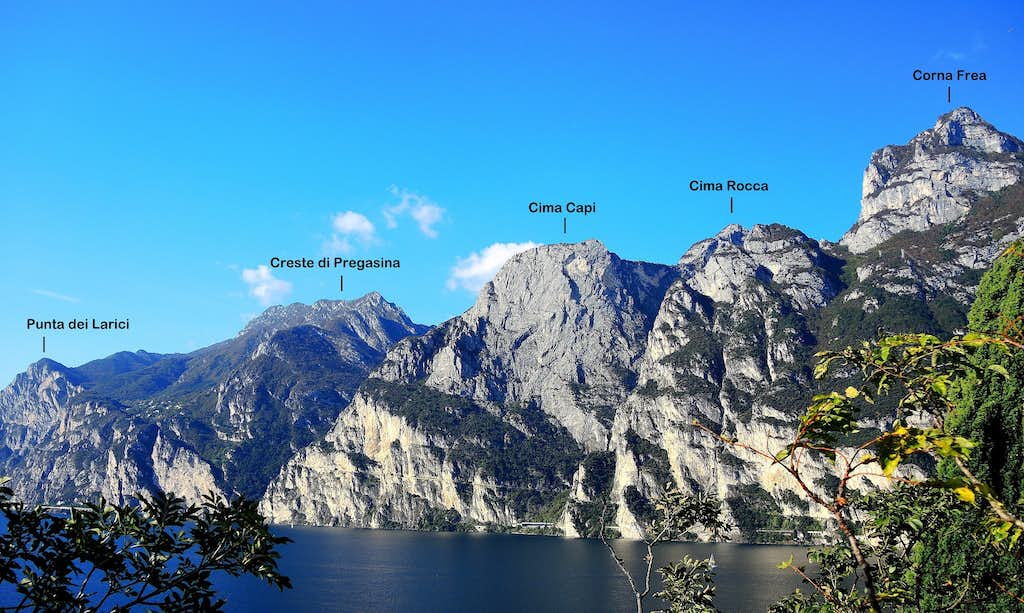 From this last fort we return to the road of Monte Brione which starts nearby, along which, with the possibility of several shortcuts that cut through the road, we descend to the starting point. During the descent we can visit some other remains of the WWI, such as the tunnel mentioned above, which opens onto the East wall overlooking the plain of Linfano. Alternatively, from the ruins if Forte S. Alessandro it is also possible to continue along the path that descends to the hamlet of Sant'Alessandro and from there return on the paved road to the port.

No fees no permits required. Both the Forte Garda and the Batteria di Mezzo can be visited, but not every day of the year. For the opening hours see:

The area is a primarily destination and offers every kind of accomodation.