Mount Garfield is a distinctive promontory along the Bookcliffs that form the northern boundary of the Grand Valley. The Grand Valley is the location of the confluence of the Colorado River and the Gunnison Rivers and contains the towns of Palisade, Clifton, Grand Junction and Fruita. The Bookcliffs got their name in 1853 when Captain John Gunnison lead an expedition through the Grand Valley. Gunnison’s recorder, Lieutenant E.G. Beckwith who noticed the unusual formation of the mountain range, said the mountain resembled “books on a shelf.” The name stuck. Settlers moved into the Grand Valley in 1882 and dedicated the promontory of Mount Garfield to President James Garfield who was assassinated in 1881.

Don’t expect to find solitude on Mount Garfield. However, if you can block out the roar from the traffic on I-70 it does make for a scenic hike. The trail climbs steeply along a relatively well-marked trail and makes for a nice little workout, gaining 2,000 ft of elevation in only two miles. The summit provides excellent views of the Grand Valley and the fertile agricultural fields of Palisade and Clifton. The area is rich with orchards and vineyards. The winemaking industry has really taken off in the area over the last decade. Although the Grand Valley is no Napa valley, perhaps it will be in the next fifty to one hundred years. 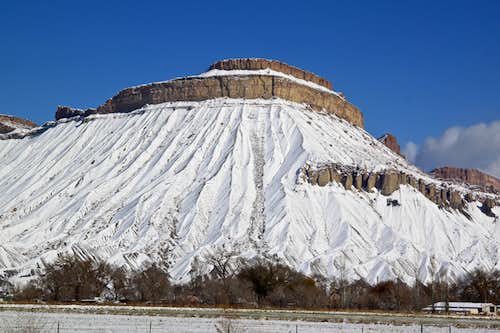 Mount Garfield as seen from Palisade.

There are two ways to get to the trailhead. The official way is to exit I-70 in the town of Palisade onto 37 3/10 Rd (I love the road naming convention in the Grand Valley). About one hundred yards south of I-70 you will cross over an irrigation ditch. Make an immediate right (west) on G 7/10 Rd. Go about a mile or so west on G 7/10 Rd until you are forced to make a right (north). Head north to a tunnel that leads under I-70. The trailhead is just on the north side of I-70. The only problem with this method of getting to the trailhead is that the tunnel can fill with water. There are signs on the tunnel warning against going through it when it was full of water. I heeded this warning and parked on south side of I-70 and waded through the two-foot deep, filthy, muddy water. This was not a very fun experience.

An alternative is to be going westbound on I-70 and pass the Palisade exit. Drive roughly one mile west past the Palisade exit and look for a spot to pull off. There is a small break in the fence and you can drive you vehicle all the way off the road into a little parking area. This will sneak up on you fast and you may miss it if you don’t know what you’re looking for. However, if you go to the tunnel and it’s full of water, this is worth a try. 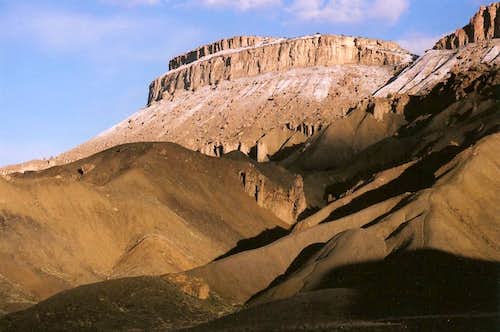 Mount Garfield from the trailhead.

The vast majority of people climb this peak via the Mount Garfield Trail. This is the easiest trailhead to get to, but not the easiest route on the mountain. 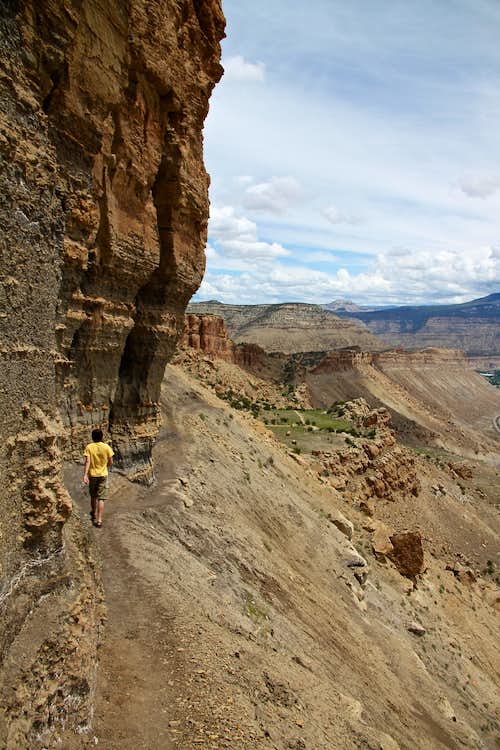 Part of the Mount Garfield Trail.

The north side of the mountain is easier to ascend. the road to the trailhead in Coal Canyon is closed December 1 through May 30, though hiking along the road is allowed year round. An ATV track actually ascends all the way to the summit ridge. 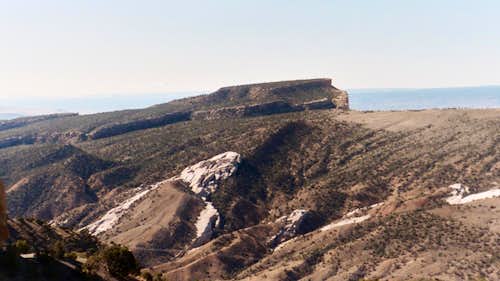 The much lesser known and lesser viewed north side of Mt Garfield.

There is another trail that ascends the west side of Mount Garfield, not far north of the summit. I don't know much about the trail, other than I have been it from the summit area.

There is no red tape other than the Coal Canyon Road (accessing the northern routes to Mount Garfield) is closed to motorized vehicles between December 1 and May 30. 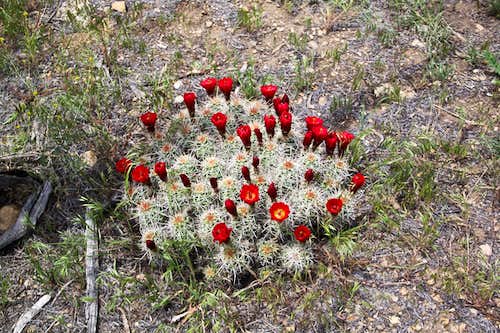 There is no red tape here, but at certain times of year, you may see some red cactus flowers.

The heat and sun can be unmerciful on the trail to Mount Garfield during the summer when temperatures often soar above one hundred degrees. There is almost no shade on the standard route and the trail is much hotter than it otherwise would be (I have felt pretty warm on two ascents, even in March).

For that reason I suggest that Mount Garfield is best climbed during the fall, winter, or spring. Because of its low elevation and south facing slopes, not much snow ever accumulates on it (and if it does it will surely melt of quickly). Right after rain and snow the trail can be dangerous, but it usually dries out quickly. 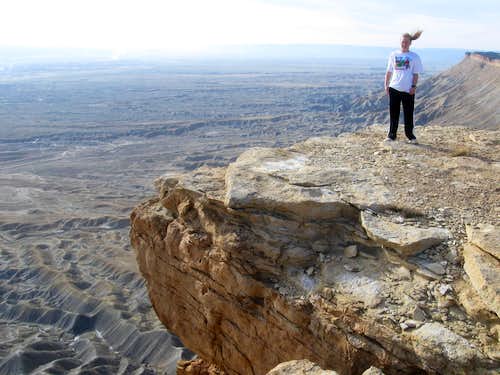 Mount Garfield on a windy March day. Notice the wind blowing and the airborne pony tail!

James M Robb/Colorado River State Park has campgrounds in Debeque Canyon, not far east of Mount Garfield and at Fruita, to the west.

There is a KOA in Grand Junction as well.

The nearest free camping accessible by vehicles is at the Main Canyon Trailhead, off the Cameo exit to the east, but leave a clean campsite here, or camping will surely be banned in the near future!

Below is the climate summary of Palisade, where the trailhead is located. The data is from 1948-2015. Palisade is at 4720 feet elevation, so expect the temperatures on the summit to be 5-10 degrees cooler, but because of sun exposure, temperatures usually feel much hotter than they are, especially on the lower half of the trail.