Mount Ida ~ Well, Not Quite

...and Failure is No Success At All

I hadn’t planned on writing a trip report about this pleasant little hike. Mostly because, well that’s what Mount Ida is…a pleasant little hike. Despite anchoring a series of peaks in a stunning setting along the Continental Divide in RMNP, from a mountaineering standpoint there just isn’t that much to write about. It’s a walk up, with a trail that probably goes all the way to the summit. Not that I would know that! Oh wait! How would I not know that? Well, because we didn’t summit! Mr. Impetuous pulled a bonehead move and we bagged a point instead of a peak. So from a hardcore peakbagger’s perspective I suppose the day was a total failure. Good thing I’m not a hardcore peakbagger!

What follows, is mostly just a photo trip report. And I suppose that was the reason I wanted to write this up…because this hike is just too damn beautiful not to share something about it here on SP! Besides, outside of not bagging Ida, the day was actually a total success. 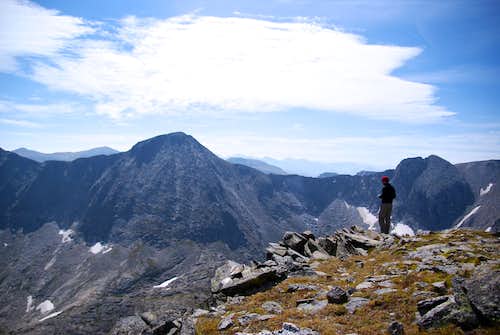 Soaking it all in...

Impetuous, characterized by undo haste and lack of thought, per Vocabulary.com. 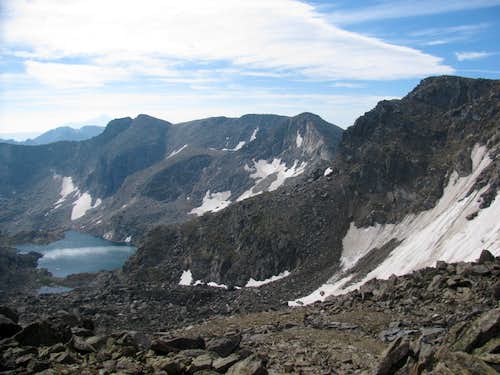 Mount Ida to the right...so close, but yet so far!
Have you ever gotten back to camp after a great day in the mountains, and said to yourself, “That might a’ been a good time to pull out the topo!” clearly visualizing in your head where you made the wrong directional decision? Hopefully you’ve never had the displeasure! But essentially that’s what happened this day. As we approached the Gorge Lakes area I lost the trail (not an uncommon issue for me, lol), which isn’t a particularly big deal, since the top of the ridge is clearly visible. So after a while I got a bit impatient and decided to just head for the ridge crest. Once at an overlook for the Gorge Lakes, from where we were, I was pretty sure it would just be a left or right hand turn and then an easy walk up to the summit.

The views from the overlook were amazing. We stopped to enjoy the view, and fortunately snap a few pics, as it would be these few pics that I would later use to figure out my mistake. As of this writing over four months have passed so I can’t really recall why I decided to turn left instead of right, although I believe I thought the slopes to the right led to Chief Cheley Peak. Of course, a quick look at the topo would have easily shown me the error of my ways. I saw a prominent point off to the left and I do remember that the decision to head that way was made rather quickly, or should I say impetuously. But, it was right there…in my left pants pocket…a one pager…enough detail…yeah, thinking back on it I now know…“That might a’ been a good time to pull out the topo!”. 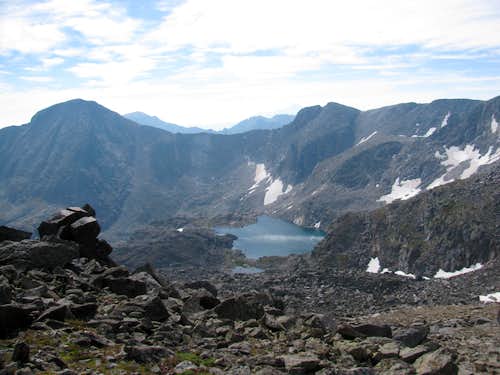 This would be a good time to pull out the topo!

A Beautiful Walk in the Park 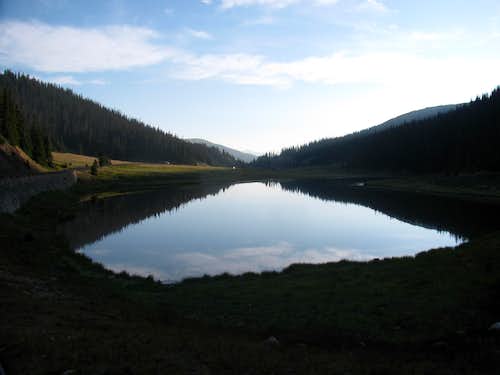 Poudre Lake - right at the trailhead 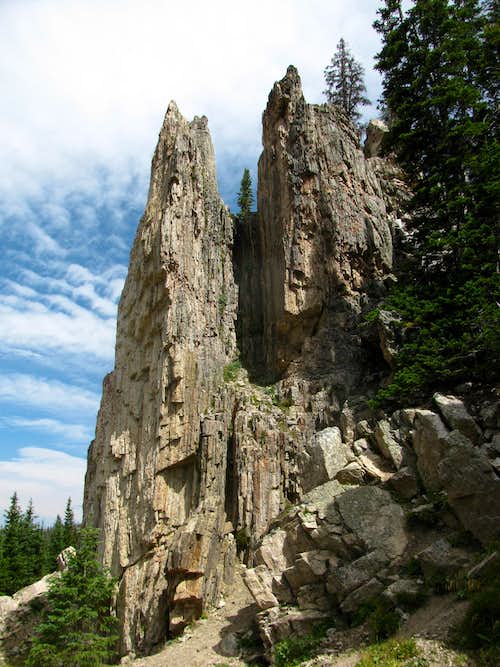 Towers along the trail, near the trailhead 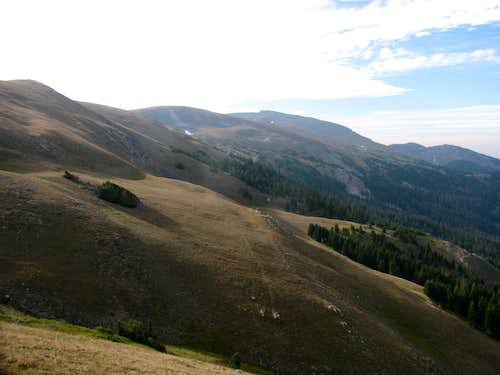 Breaking out of treeline 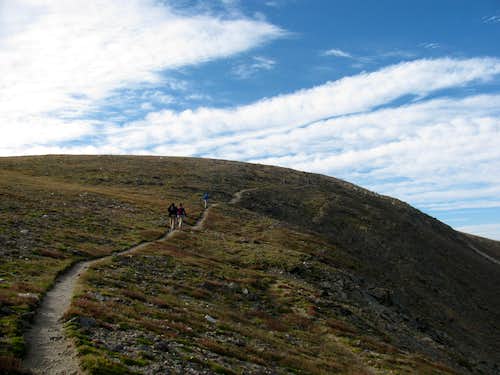 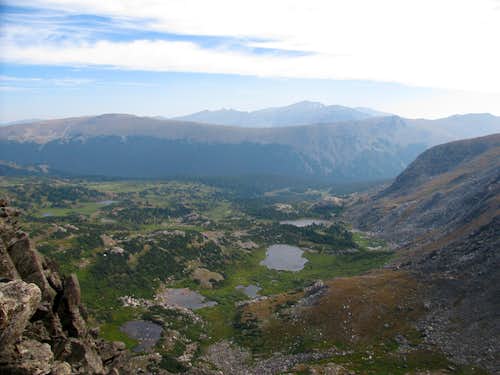 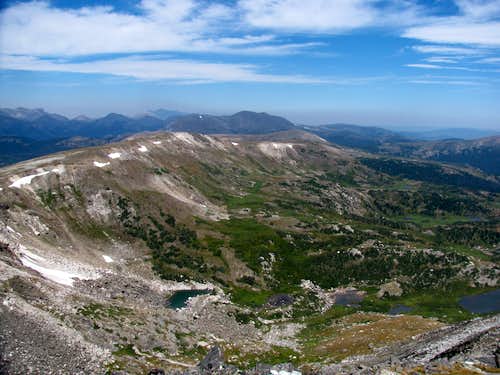 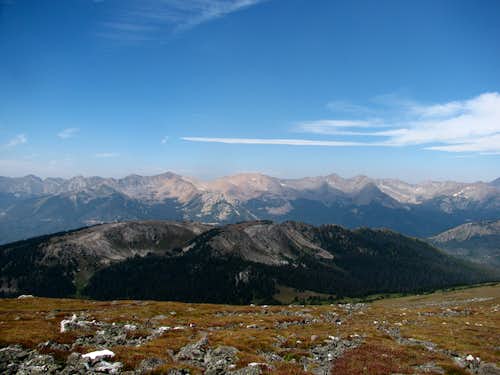 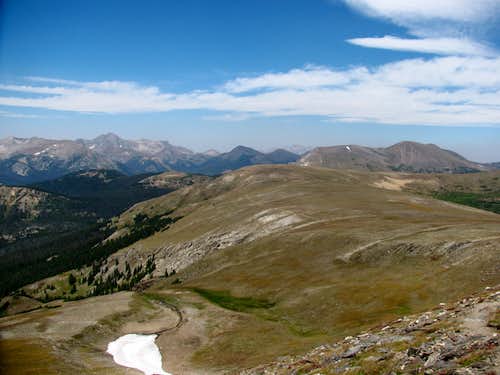 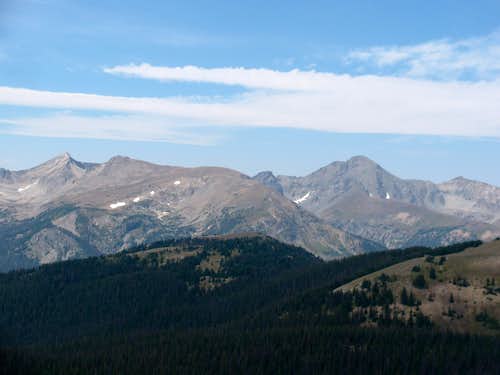 But, for a number of reasons, the day was still a major success!

This was the first hike on our stay in RMNP. I was accompanied on the hike by my son Andrew, my goddaughter Olivia, and my son’s friends Chris, Fish and Tyler (a 4th friend, Wes, would join us a few days later). For the latter, this was their first real hike. I know they had all spent some time in the mountains before, but never on a hike like this.

So what was the pure awesomeness of not summiting?

We eventually made our way over to what I now know is a point at 12,600 feet (and some change). On our way I stopped at several spots that offered some amazing perspectives of the Gorge Lakes and the surrounding peaks. It is a stunning setting and this section of the ridge allowed us to get some views that you don’t get from the summit of Ida (a nice consolation prize). 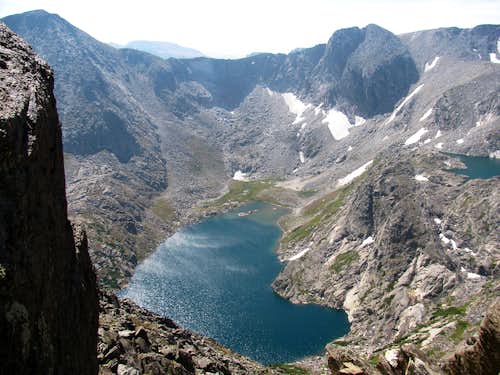 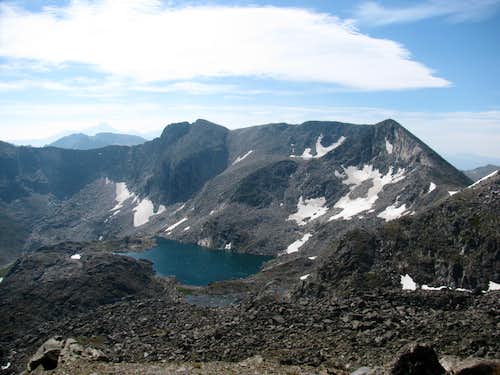 Once we reached point 12,600 and change, we settled down for a good 30 minutes and soaked up the beauty of the area. Maybe the best part of this viewing spot is that (obviously) no one intentionally heads to point 12,600+, so we had the place all to ourselves. A crowded summit, or solitude in the mountains? While I would prefer a summit and solitude, in hindsight this wasn’t a bad trade off! There were a lot of cars at the trailhead, so I was surprised there weren’t others up here with us. Hmmm? 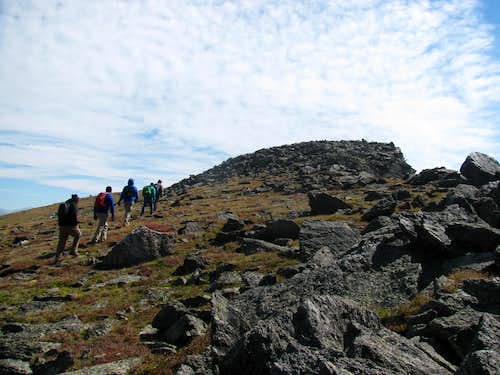 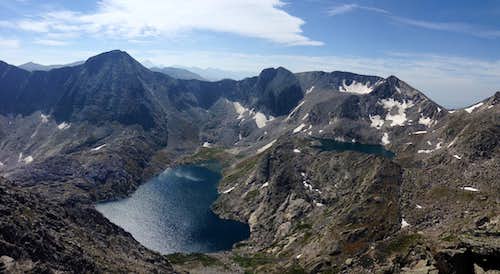 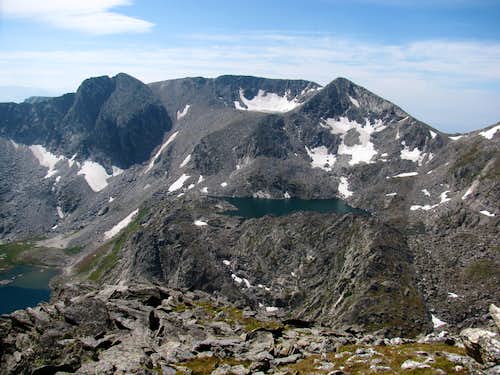 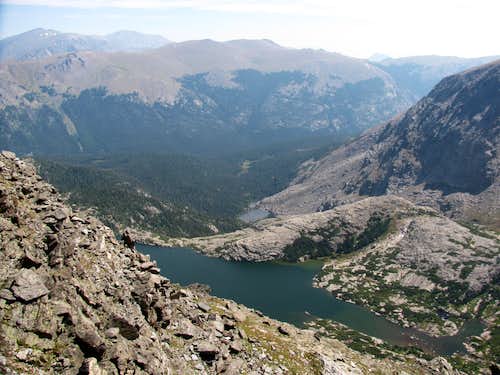 On a less positive note, I picked this hike at the last moment, and mostly as a weed out hike for Longs Peak. This decision was a smashing success! Due to schedules, the only day we had for everyone to take a shot at the Keyhole Route was on Monday. Heading into this trip I had two objectives; get myself to the top of Mount Alice (box checked) and my son Andrew to the top of Longs (box checked). Unfortunately, at least from my viewpoint, a group size of six for Longs spelled trouble. Big groups, on a route like the Keyhole meant one thing, an increased chance of problems and reduced chance of success. But Chris, Fish and Tyler decided that the 10 miles and 2100 ft of gain on Sunday was enough for them. And then there were three… 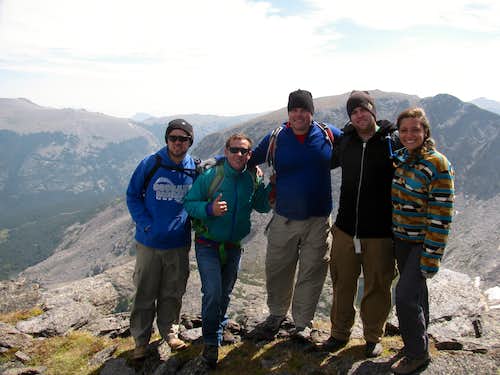 Returning to the positive, over the Christmas holidays, Andrew and I ran into Chris and Wes at one of our favorite corner watering holes. It was the first time I had talked with them since the RMNP trip. They both raved about the trip, particularly Chris. While they did a minimal amount of hiking, they loved their few days on the trail (we all would make the hike to Sky Pond on Wednesday). It was great to hear that it was such a positive experience for them. There were lots of discussions about them joining us for (hopefully) a trip to the North Cascades this coming August. A few more mountain converts! Mission accomplished… 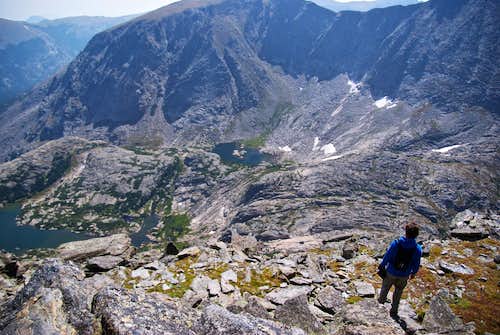 Chris...that moment when you know they get it!

While we sat at 12,600+ I wasn’t 100% positive we were on Ida. Something didn’t seem quite right. The peaks weren’t all labelled on the topo map I had so I was missing some perspective. Then, on our way down, we ran into a number of other hikers, mostly those on their way up, but some on the way down. This just added to my speculation that we hadn’t bagged Ida. It would be several weeks later, after I got home and took a good look at my pictures and pulled out a better topo, that I realized my mistake. Oh well!

But still, we didn’t summit! So I suppose the day was a total failure. Really…

I made a similar blunder last summer in Montana. There might be a TR, but the short of it was that I took the wrong approach route to my peak. When I figured that out and identified the correct way, I had a choice: give back some elevation and do it right, or proceed in the belief that an alternative way would go. Well, I chose the latter, and it didn't work. I climbed an unnamed peak instead, and there were nice views, but I left feeling pretty disgusted with myself.

I can completely relate to that being disgusted with myself feeling. I could try and rationalize my mistake a number of different ways if I wanted to but regardless, it was just poor decision making. In the grand scheme of things, not a real big deal...no one got hurt, we had great views and a great day...still!