Mount Romulus is a distinctive flatter topped mountain ringed with vertical cliffs that stands out from Calgary because of a line of snow that stays on the upper edge/rim of the mountain late into the spring.This route is a shortcut alternative scramble route for Mount Romulus versus the standard Kane scramble route. The route uses the South drainage and a hidden ramp and gully to breach a rockwall and access the upper ridge on the mountain. The route joins the regular route at the low point just before the summit and finishes with a scree slog to the summit. This route is moderate scrambling on the Kane scramble rating so it is slightly harder than the long route but the slot canyon section and the hidden ramp/gully make it more interesting.Round trip this shortcut saves over 6 km of mountain biking, 6 km of hiking scree and about 200 m of elev gain/loss.Overview of routes - Note the cliffs around the summit and the line of snow along the rim of the cliff. Picture by Kevin Altheim. 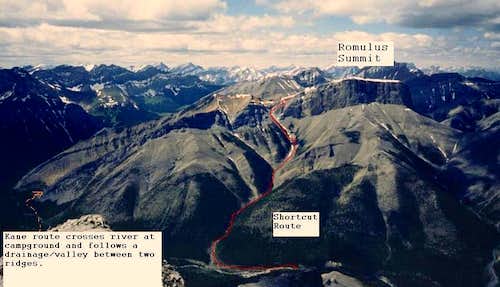 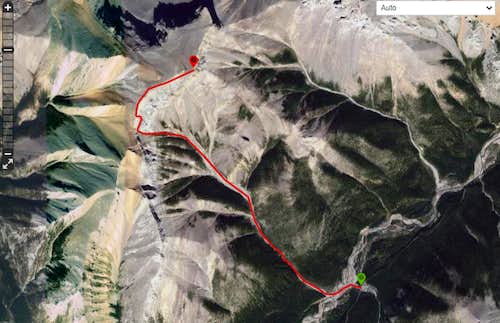 Pic of route map. Leave bike trail at wide gravel drainage at -114.970 50.769 Cross river and go up drainage. Bypass a couple of waterfalls on RH side. Stay in drainage and ignore left forks. As approach cliffs and last of trees follow drainage up or use grassy/treed left side bank/ridge. Some moderate slabs at top of drainage to gain ramp at base of cliffs. Follow ramp right for 150 -200 m and then left around corner to hidden LH scree gully. Use gully to access col in summit ridge. Walk to summit.

Mountain bike from Little Elbow campground for about 8 km to low point in trail where a drainage comes in from the south off Mount Glasgow.Cross river here and proceed on far side until hit South drainage.South drainage from summit. From this perspective you will be coming by bike from the left on the bike trail which is on the far side of the river. Leave the bikes at the low point in the trail in the upper left of the pic and cross the river. Travel on North side of river until reach the South drainage. 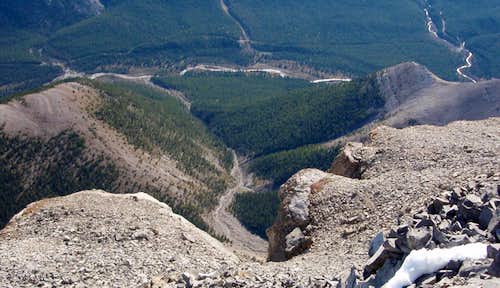 View of upper part of route from the bike trail Oct/07. 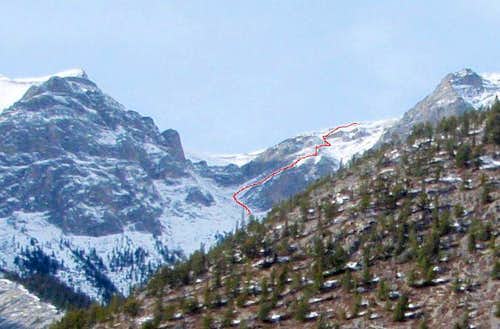 Slogging up the drainage after it opened up. Earlier there was a slot canyon section with several rockband/waterfalls that required bypasses on treed slope to the right. 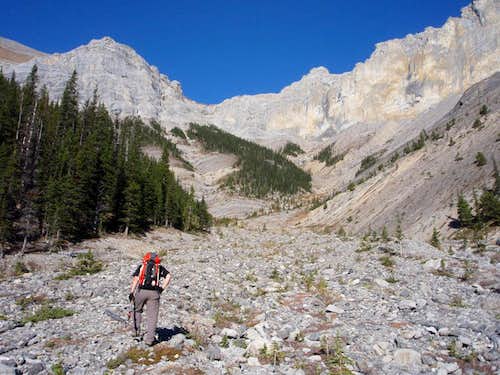 Approaching the rockwall which rings the upper part of the mountain. The ramp is totally hidden from this perspective but it is just below the dark grey and yellow horizontal bands just above the V of the gully.  There were some smooth slabs in the drainage that had some moderate scramble moves but probably could be avoided.This section would be harder if covered in snow or wet. 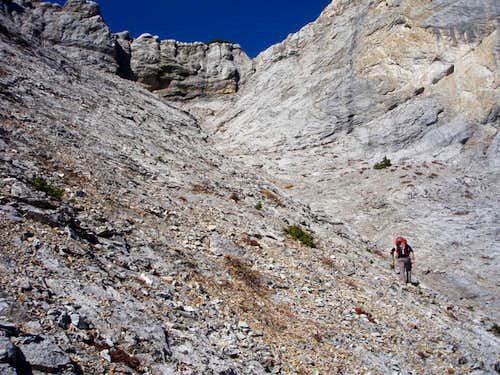 The SW end of the hidden ramp at the base of the rockwall. Person for perspective - pic taken from halfway up ramp.  Note dark grey and yellow horizontal bands on wall. 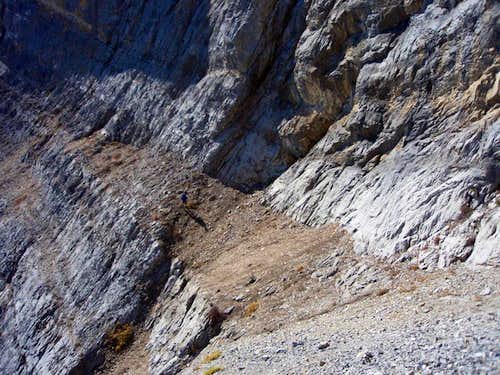 Going right up the ramp. Note person in lower left for scale.  Continue up this ramp until can walk around to left and up easy ledges to a left hand hidden gully. 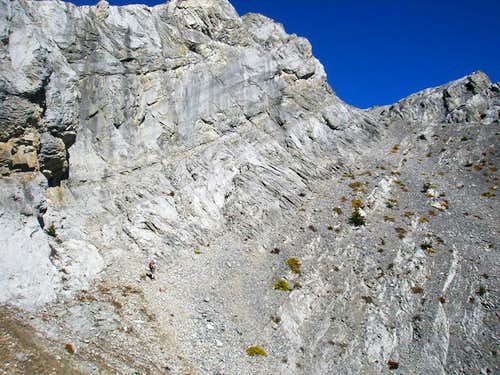 Left hand gully which breaches the rockwall and gives access to summit ridge at a low point in the ridge.  On descent so about to turn right and follow base of rock around right to ramp. 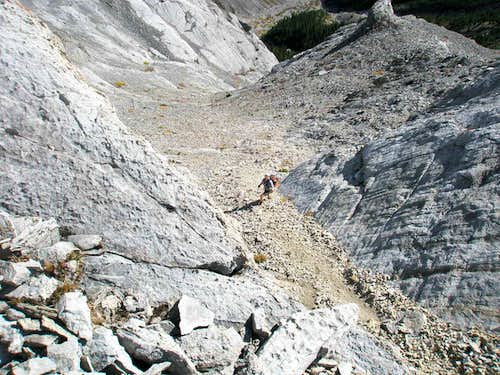 View of the rockband and summit ridge from upper part of summit ridge. The route is marked but the gully and the ramp are mostly hidden from here. The regular route comes over the brown/orange high point in background and trails are visible on the high res version. 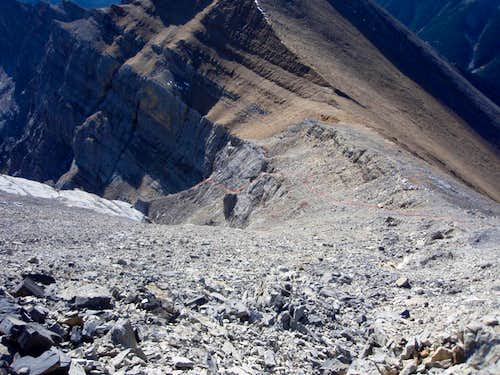 Note road closure between Dec 1 and May 15th prevents access. River crossing much easier in the fall. Can be dangerous in spring if high. This route would be more difficult with snow in the drainage.