Mount Blakiston is located in the rugged, windswept Canadian Rocky Mountains in stunning Waterton Lakes National Park. Waterton Park, in the southwestern corner of Alberta Canada, is a non-commercialized, beautiful piece of nature often referred to as the Crown of the Continent. Home to lofty mountain peaks, crystal-clear lakes, a superb variety of plants and animals, and calm gently rolling prairies, Waterton is a nature lover’s dream-come-true. At 9,547 ft (2,910 m) Mount Blakiston is the highest point in the park.

Mount Blakiston sits to the left of center in this 505 sq km (195 sq. mi) park, offering breath taking, panoramic, views in all directions. To the east is Ruby Lake and Crandell Lake. To the north, one may glimpse Red Rock Canyon and the surrounding peaks. To the south one sees the Lineham Lakes . Most impressive is the view to the south east of the deepest lake in the Canadian Rockies, Upper Waterton Lake (148m/487 ft deep), whose southernmost end crosses from Canada into the United States.


Mount Blakiston is one of the peaks of the Clark Range. The Clark Range forms part of the Continental Divide and also the boundary between the Canadian provinces of Alberta and British Columbia. A small portion of this range extends into the far northwestern section of Glacier National Park, Montana, USA. The range is named for Captain William Clark of the Lewis and Clark Expedition.

The home of Mount Blakiston, together with neighboring Glacier National Park, in the US state of Montana, form the world's first International Peace Park established in 1932. UNESCO has identified this area as a World Heritage Site making the joint peace park a worldwide treasure.

Once you arrive at the Park follow the entrance parkway (Highway 5) toward the town site, which is located 8 km (4.8 miles) down the road. En route, you will pass Mount Crandell, which is located directly across the highway from the famous Prince of Wales Hotel, about 1 km (0.6 miles) shy of the town. As you pass Mount Crandell, and start down the hill watch for the Akamina Parkway (aka Cameron Lake Road) on the right, as you will want to take that road. The Lineham trailhead, the typical starting point for climbing Mount Blakiston, is located 5.5 miles (8.8 km) up this narrow winding road. Just prior to the Lineham trailhead at 4.8 miles (7.7 km) is the Discovery Well - a National Historical site commemorating the discovery in 1902 of the first producing oil well in Western Canada. Less than a mile (about 1.4 km) further up the road from the Lineham trailhead is the Rowe Lakes trailhead a potential exit point for those continuing on to Mount Lineham, via the Hawkins Horseshoe, after climbing Mt. Blakiston.

Lineham Falls Trailhead
As the getting there section outlines, take the Akamina Parkway up to the clearly labeled Lineham Falls Trailhead located on the west side of the road. Follow the well groomed trail through the pine tree forest. After about 2 or 3 kilometers the trail exits the forest and you will notice Lineham Falls cascading over the headwall cirque. At this point follow a faint path that appears to the right of the creek and into an obvious avalanche runout zone and up into a gully (see the Linda's Scrambles and Rambles link in the Trip Reports (Externally Linked) section for a picture of the gully). You should notice a few stunted evergreens near the first bluffs. In due course the modest scree slope becomes a mix of class 3 ledges and talus. Continue heading more or less straight up. As you draw near to the final lichen covered cliff band, look for a couloir directly below the summit, this is your route to the summit.

This route is not advisable in winter since it is an avalanche chute. In spring, when the snow has settled, an ice-axe and crampons would be advisable on this route. In the summer, after the snow has melted, no special equipment should be required. 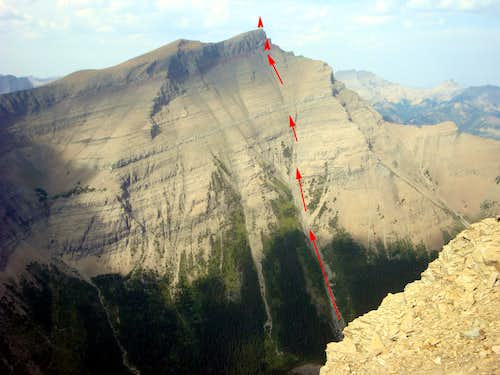 Enter the gully on the right.
Make your way to the trees above the top of the gully,
staying on the right side of them.
Then work your way to the high point above.
It's not as steep as this picture makes it look.
Hawkins Horseshoe
From Mount Blakiston many climbers choose to continue on to Mount Hawkins, and Mount Lineham in an ambitious horseshoe circling Lineham Lakes basin, and descending Mount Lineham into the Rowe Lakes basin. As mentioned in the getting there section the Rowe Lakes trailhead is just 1.4 kilometers up the Akamina Parkway from the Lineham trailhead, so a shuttle vehicle is not needed when doing the Hawkins Horseshoe variation. There is some elevation loss and gain along this route. One can use the Tamarack trail to descend into the Rowe basin, or descend more directly down the path of one’s own picking on the south-facing slopes of Mount Lineham.

In the winter it might be feasible to climb Blakiston by doing the Hawkins Horseshoe in reverse (starting with Lineham and moving across Hawkins to Blakiston), however accessing the Rowe basin involves crossing at least three obvious avalanche paths. Obviously, wait for stable conditions, and have solid knowledge of avalanches before attempting a winter climb of Mount Blakiston. 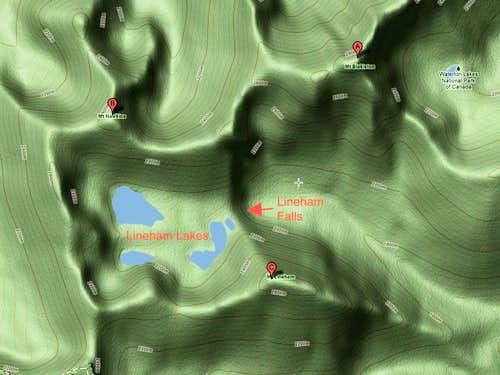 The summers in the Mount Blakiston area are brief with some hot spells (high 35*C/94*F). Winters are long and relatively mild (high 10*C/50*F), with occasional warm spells caused by Chinook winds. This area is often one of Alberta's warmest places in the winter, despite ample snow and temperatures that can occasionally drop as low as -40*C/-40*F.

In the spring, summer, and fall, one must pay an entrance fee in order to get into Waterton Lakes Park, home of Mount Blakiston. There is no fee in the winter. As of summer, 2011 the Canadian dollar daily rates were $7.80 per adult or $19.60 for a family/group. Click here for the most up to date rates.

Mount Blakiston is named after Lieutenant Thomas Wright Blakiston a naturalist, magnetic observer, ornithologist, and member of the Palliser Expedition between 1857 and 1859. Some say he named the mountain himself. In 1858 Blakiston explored passes through the Rocky Mountains near the 49th parallel, naming the Waterton Lakes and mapping Kootenai Pass.

Panoramic View From Nearby Mount Crandell, with Mount Blakiston labeled on the far right (you will need to use the horizontal scroll bar below to see the label for Mount Blakiston).

The image below is displayed from and belongs to explor8ion.com