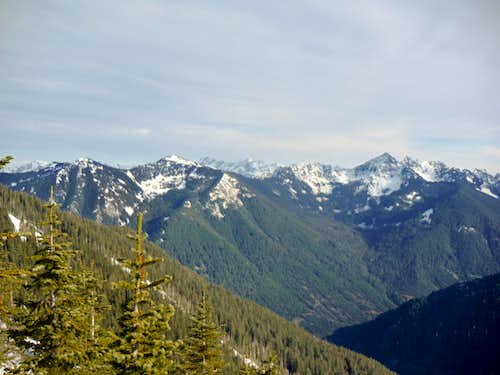 Chimney Rock, Caroline and Chair from near the summit area of Thompson Point
If you are looking for another cool summit in Washington just outside of Seattle here is yet another one that you might want to either visit on your way to higher peaks or just make as your end destination. It even has a cabin on top of it, though the cabin is locked and it is also private. At present the cabin does have some damage to the shingles roof of it. Like Mount Si , Mailbox Peak , Crater Lake Mountain, and Dirty Harry's Peak , this summit does not have over 400' feet of prominence. But like the other mountains listed,this summit is quickly becoming more popular due to the expansive views that it has as well as it's close proximity to Seattle. Expansive views of Olympics, along with other mountains such as Kaleetan Peak, Chair Peak, Mount Rainier, and hundreds of other summit make this mountain a pure fun place to be in winter. 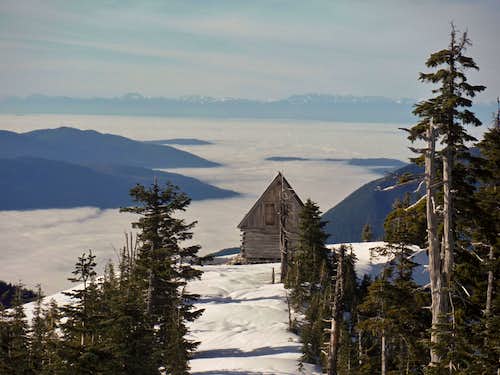 The private cabin and the inversion fog

I bet to say that Thompson Point is visited more than twice as much as neighboring Revolution Peak and Russian Buttes. One of the big reasons for this that many who attempt the other two mountains tend to underestimate the effort needed to get to these mountains. Your truly was one of those people though I will be back for the other two later on. Just to get to Thompson Point via the Granite Lakes Trail and subsequent forest road it will be roughly 14 miles and 4000 feet of elevation gain. Revolution Peak is another mile and is rough Class 2 scramble with Russian Butte being 2 1/2 miles further and some more Class 2 and 3 scrambling. The Granite Lake Trail used to be a forest road that was recently converted over to a trail due to heavy renovation. Many who used to take the old road tend to say that the new renovation actually made the road much tougher than it used to be. It should be noted that once off the renovated part of the trail slide alder is now beginning to effect some of the upper parts of the road. 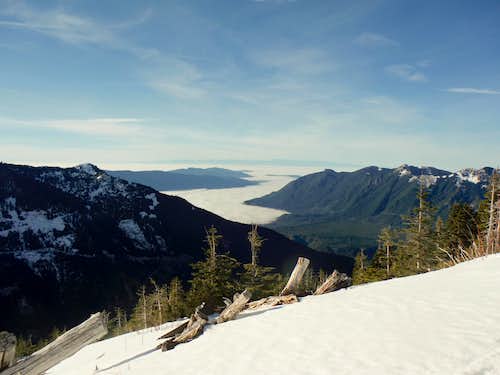 The second reason is that Thompson Point clearly is a great snowshoe destination. It is mostly a trail most of the way and road walk the rest of the way to the summit area (with just a quick 25 foot scramble to the absolute highpoint). One can get to the Thompson Point summit area in most winter conditions without an ice axe (it should be noted that if anyone wants to go further to Revolution or Russian Butte an ice axe is needed from November to at least July based on snow season). The true top contains views towards the east and south with partially views to the north (partially blocked by trees). The cabin area contains views excellent views west towards Seattle, and points north. 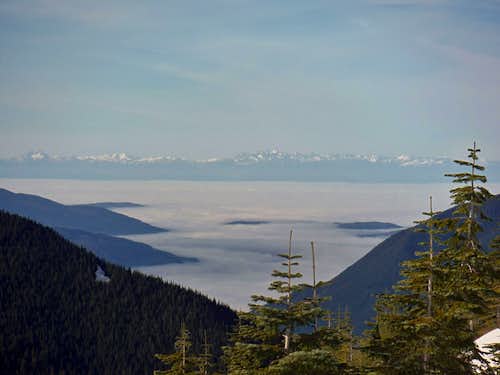 Inversion fog and the Olympic Mountains

FROM EXIT 34 OFF OF I-90: Head north to Middle Fork Road 0.6 miles on your right hand side. You will hit a fork in the road and you can go either way because they run back together a half mile later. The trailhead to the to the Granite Lakes Trail will be on your right just 0.2 miles past the Mailbox trailhead.

There is an alternative approach which is shorter. This approach has been discouraged by trail maintenance but you will see it in a lot of literature. It is rougher and much harder to navigate at night because in parts it is just a well established bootpath. For this trailhead you stay on Middle Fork Road for 5.1 miles from where you turned on it and there will be a turnout on the lefthand side. The now decomissioned road will be across the way. 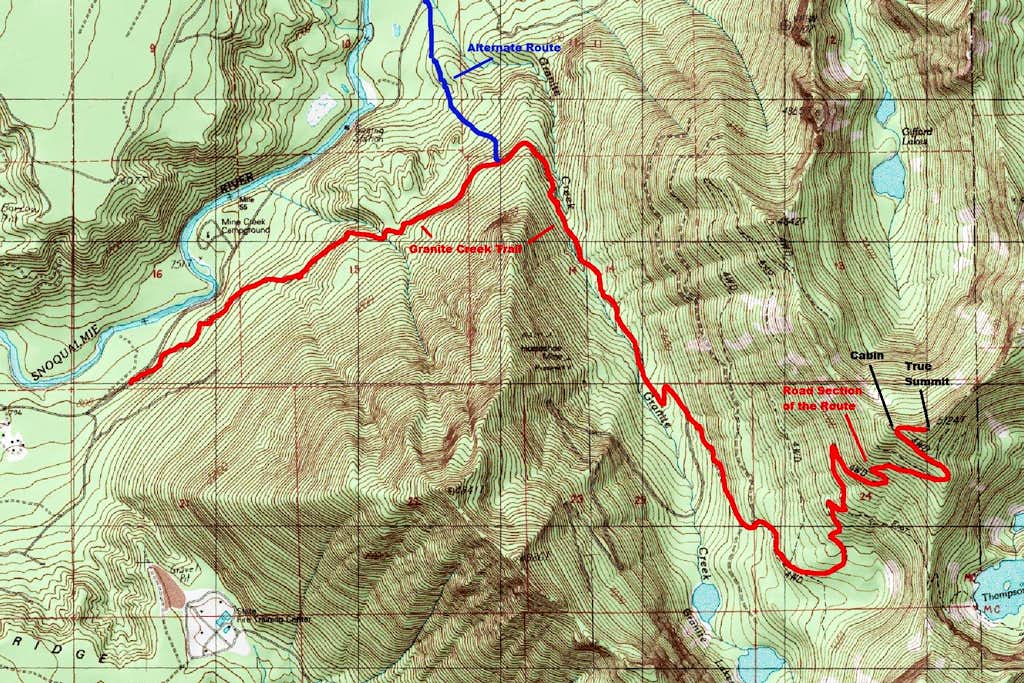 Map of the Route up Thompson Point
From the Granite Lake Trailhead: You want to take the Granite Lake Trail (formally road) all the way up to the turnoff between Granite Lake and Thompson Lake. At that intersection make a left to Thompson Lake. Stay on the trail again continuing all the way to the yet again another intersection. One going to Thompson Lake and another veering to the left toward Thompson Point. Veer left again and continue going uphill. The upper half of the road now has Slide Alder growing in it. Stay on the road as it head all the way to the cabin and to the foot of the summit area. Scramble up the last 25 feet to the true summit area. 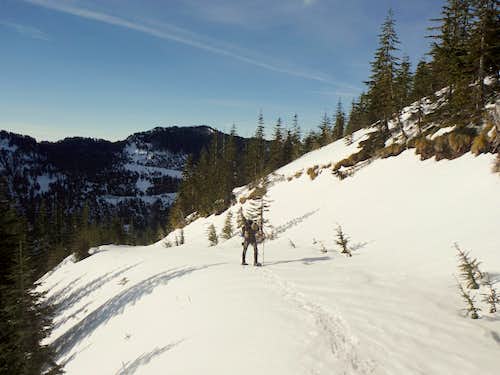 The alternative discouraged route is not well marked and is not recommended for night travel. Chances are there will be more obstacles on this route to discourage people from using it. Head up the decommissioned road for about 0.5 miles. You will run into an intersection. From there make a left onto another decommissioned road. Once on that road walk another 0.3 miles and start looking for a well establish bootpath. Take that bootpath all the way to the Granite Lake Trailhead.

From all the signs that I saw right now there is no pass required at either trailhead. I will stated though I wonder how long this will last because both Mailbox Peak and Bessemer Road on both sides of the two pullouts/ trailhead require Discover Passes. Since I live close by and will be back for a couple more summit I will periodically update this page if changes do happen.

This peak can be hiked all year round. It should be noted that if you are just going to Thompson Point that in winter just trekking poles and snowshoes are recommended. Though it is mostly a trail and roadwalk I would not go up this mountain in high avalanche danger days. There are some open slopes toward the top. 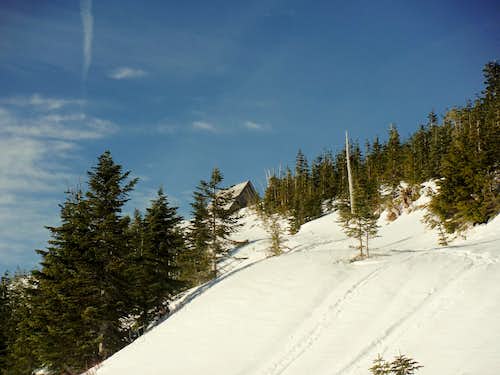 There are no restrictions on camping on the Middle Fork Snoqualmie side. Ideally you would like to camp at or near the summit area of Thompson Point because there a number of potential areas. Just be aware that is not much water in that region.