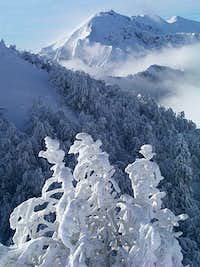 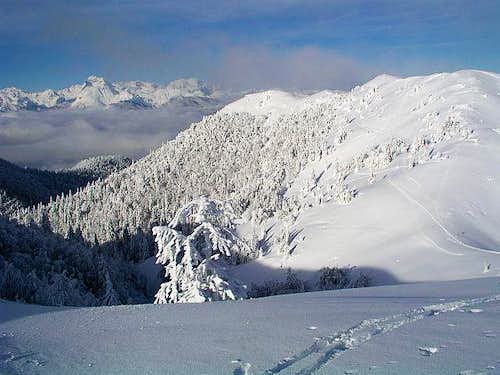 Above the Bohinjsko sedlo (road pass), 1217 m, which separates the massif of Ratitovec from the rest of South Bohinj Range, the main ridge makes a nice arc around the meadow of Soriška planina. This broad grassy valley is opened towards the north, but due to its gentle slopes it is still pleasant and sunny. But in winter, its north oriented slopes still keep snow long enough, so on the slopes of Lajnar, 1549 m, we have a chair lift and ski terrains. Otherwise just all the summits around Soriška planina are nice ski touring goals and also very fine panoramic points.

The southern slopes of these mountains however steeply lower down towards the Petrovo brdo road pass and into the Baška grapa (valley). They are mostly grassy indeed, but also intermitted with some rock crags. An interesting feature of this area are also many well preserved remains of fortifications, which Italy built there between the World War I and World War II, when posessing the territory. The military mountain paths do help us today to reach the summits, in the ex barrack local shepherds made their shelter. All bunkers along the ridge lines are of course today abandoned, but if we come with a battery, many of them can be seen also from within.

On the very east of our group of six summits, steeply above the beautiful village of Sorica, rises the Dravh, 1547 m. It is mostly ascended from the Soriška planina, but a nice, marked path reaches it also from the southeast, from above Sorica. From Dravh the main ridge lowers towards the southwest for less than 100 m and then from the saddle rises again on the almost equally high summit of Lajnar, 1549 m. Just below it, there's the upper station of ski lift. On the summit of Lajnar, the ridge turns towards the west-northwest and descends on another saddle, 1488 m high.

In continuation, the ridge of Slatnik, 1597 m, becomes more steep, so the ex military path crosses its southern slopes. Further to the northwest, there's a small plateau near the main ridge. There, we shall find most of fortifications, including the big barrack. Another Slatnik, 1609 m, rises just above the plateau.

From the plateau, the main South Bohinj Range continues lowering towards the west, but towards the north, a rounded side ridge deters as well. It soon culminates on the most important summit of the area, Možic, 1603 m. The elevations further on are all lower and forrested.

Finally, west of the Možic, the last fine summit of our group rises out of the woods. That's Šavnik, 1576 m. It is rarely visited, but also with a fine panorama, especially over the Bohinj valley.

On the Soriška planina, which is the most suitable trailhead for these summits, we can drive either from the valley of Bohinj (on the northwest) or from Selška dolina (valley, on the southeast). On the latter approach, it's certainly worth sightseeing a bit two wonderful villages: Sorica and Danje. In Sorica, Ivan Grohar, the famous Slovenian painter-impressionist was born. The village is stretched alon a nice, grassy ridge. The two villages od Danje are situated a bit eastwards of Sorica, already on the slopes of Ratitovec. Especially Spodnje Danje with the cute St. Mark church is picturesque. When listing picturesque villages, also on the Bohinj side the village of Nemški rovt can offer you a few nice scenes.

The other trailheads may be in the valley of Baška grapa or in the villages above it.

And finally, let's mention the mountain road which goes around the summit of Šavnik by its northern and western side. It reaches just to the saddle of Vrh Bače, 1273 m, but I often found it unpassable (for car) due to huge deposits of wood logs.

We can combine summit ascents in many ways, here are just a few hints.

1. Soriška planina round tour. From the parking place, or from Litostrojska koča (hut), we start gently ascending towards the south. Then we keep left of the ski terrains. The summit of Dravh can be ascended anywhere. It offers nice views especially on the massif of Ratitovec and hamlets on its southern terrace. In continuation we keep to the main ridge - on the summit of Lajnar, perhaps also on the first summit of Slatnik (1597) and then on the higher Slatnik (1609 m). All these summits and saddles among them are easily reached also directly from Soriška planina. To the big barrack also a good marked path comes.

From the big barrack we continue northwards, towards the Možic. The marked path first descends a bit, then it reaches the summit from the west. Just on top of Možic, there's a big steel dome and below it a big, elaborated bunker. It has its entry much lower, on the southern side.

From Možic, we can either return, or continue peakbagging - descending westwards on a mountain meadow and from there ascending from the southeastern side Šavnik, the last summit. From there we easily return to Soriška planina by the broad valley, which starts descending northwards from the saddle between Možic and Šavnik. After crossing another meadow, we soon hit the mountain road and return by it.

The second option to return is to descend on Vrh Bače saddle, 1273 m, and then follow the mountain road around Šavnik all the way to Soriška planina. If that road is free of wood logs, the end of it is the best trailhead for the western summits of our group.

All parts of the crossing are easy (T2), only the ridge of first Slatnik is more steep and requires additional attention (T3). Some 3-4 hours for the whole round tour.

2. Dravh from Sorica village. We don't need to start the tour just in the village. We can park on the big round turn of the road above the village, by a forrest road we soon hit the marked trail. Following the marks, we first cross the slopes of Dravh in the western direction, then the path starts ascending more steeply. We exit the woods by a hut, which the only one survived, and continue crossing the slopes left up. Below the summit, the path does two turns and soon reaches the main ridge just above the saddle. There we turn right towards the summit of Dravh. The path is mostly easy (T2), but steep in a few sections. One passage is a bit more demanding (T3), carefully if slippery, or icy! 1 h 15 min.

3. The approaches from Petrovo Brdo, 804 m, and from Bača pri Podbrdu, 781 m. These are the marked paths from the traiheads, which are lying quite low, on the southern side. The eastern one reaches the hut in the woods south of Slatnik and then Lajnar, the western one goes directly up on the Vrh Bače saddle. That saddle, 1273 m, was once very important, because the trade route from the southern valleys into Bohinj was crossing it.

We can ski from all summits of the group. When the ski terrains are open, we are not allowed to skin up by the arranged slopes - on Lajnar. But all the other summits can be ours. They are reached from the saddles between them. On Dravh we can ascend quite directly and also for skiing down, the powder of its northern slopes is most beautiful. But Dravh is probably our last choice. It is best to ascend Slatnik and/or Možic. The valley, reaching the big barrack is a bit overgrown, but in good conditions still nice for skiing. In deep snow be careful about eventual avalanches from its slopes! Haven't been there yet, but supposedly also Šavnik is nice for skiing. Especially with powder now on its northern slopes.

The summits around Soriška planina can be reached any time of season. Only in really deep snow consider the risk of avalanches.