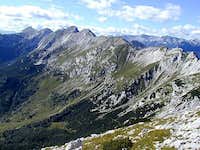 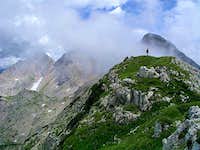 The South Bohinj Ridge (or the Lower Bohinj Ridge) is one of the longest compact ridges of Julian Alps. Considering only the Slovenian part of Julian Alps, this is the first chain of high mountains from the south. Like a giant arc it encircles the primeval Bohinj valley, causing that this beautiful part of the World, being on the north surrounded by the even higher Triglav group, stayed for centuries withdrawn from the rest of the country. More about Bohinj, see on the page of Bohinj group.

The ridge stretches around 30 km in the east-west direction and is from 7 to 15 km wide. On the north its border is the Bohinj valley (the valley of Sava Bohinjka river). From the south, these mountains are bounded by the rivers Bača, Tolminka (both tributaries of Soča) and Soča itself. On the west, the Lepoče valley separates the South Bohinj Ridge from the Krn group and while the ridge gradually turns northwards it is considered that it geographically ends with the Vratca Pass (also: Bohinjska Vratca, 1803 m). On the east, the Bohinj Pass separates the group from lower foothills stretching further towards the east. So, by most geographers the South Bohinj Range ends on the Bohinjsko sedlo (Bohinj Pass), but we shall consider as part of it also the massif of Ratitovec, stretching east of Bohinjsko sedlo.

If you expect that Julian Alps consist only of high, vertical walls and wild ridges you might be dissapointed with the South Bohinj Ridge. These mountains are steep, but because of their relatively low altitude they are more grassy and thus offering hiking and tour skiing possibilities. The highest peak of the group is Tolminski Kuk, 2085 m. Although these mountains are not very high, because of deep valleys the altitude differences are very considerable. Tolmin, one of the points of departure on the south, lies only 200 m above the sea level and Bohinj lake on the other side lies 525 m above the sea level.

The view on the whole crest from the NW, across the Komna plateau

In the valleys north and south of the ridge Slovenian people live. It is interesting that in the 13th century, when these areas were still unpopulated, the bishophs of the German Freising gave much of that land to their farmers from Tirol (from around Innichen). Immigrants had some benefits and in a century they populated the slopes above Baška grapa and the sunny terrace below the Ratitovec. For centuries they kept contacts with Tirol, but in the last 150 years they melted almost completely with Slovenians.

Highlights of the Group 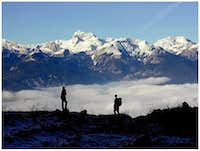 Triglav from below Črna prst 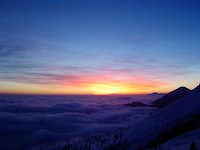 The character of the South Bohinj Ridge is alpine. Although its peaks hardly reach the 2000 m limit the whole group from the peak of Črna prst towards the west nowhere lowers below the 1700 m limit. So you can imagine why the most recommendable hiking is crossing the whole ridge. The tour can be done in two days. Hiking by the top of the ridge is rewarded by an amazing panorama: towards the south and east, the rest of hilly Slovenia, ending with the Adriatic coast, towards the north and west, the highest Julian Alps peaks with his Majesty Triglav in the centre.

In early summer the South Bohinj Ridge is known by it's abundance of flora. Due to special geological conditions, especially Črna prst is famous by its flora. Mountain spring (May till early July) is besides late autumn the most beutiful season for hiking.

A special natural phenomenon is also the high karst plateau of Komna. Shattered limestone rocks are covered with dwarf pines, so outside paths the terrain is extremely hardly passable. But in winter this plateau changes into a white sea of soft hills, ideal for tour skiing.

Last but not least, we must mention the tranquil Bohinj lake, more than 4 km long and almost 1 km wide mountain pearl and Savica river, its tributary, best known by it's beautiful, more than 50 m high source waterfall. 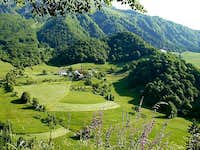 The South Bohinj Ridge mountains can be reached from the south and from the north. Some important trailheads and parking possibilities can be seen on the map above. From the south, you follow the dreamy beautiful valley of Soča river. You will nowhere in Europe find a river of a such light blue colour. If in a small town Most na Soči (The Bridge on Soča) you turn right (eastwards), entering the Bača valley. Most of the trailheads are above it, but the easternmost are lying beyond the Petrovo sedlo (road pass) and can be reached also from the other side. That's the direction from Škofja Loka, from where you drive up the Selška Sora valley.

Through the valley of Bača also the railroad goes (and through a tunnel further on into Bohinj valley).

Driving north from Most na Soči, you will soon reach the Tolmin town. From there a narrow mountain valley goes further north, reaching the base of the western part of our group.

From the south a few mountain roads climb up to remote villages and hamlets, which can be used as departure points of mountain tours. But they all lie quite low, up to 800 m of altitude.

North of our mountain range the Bohinj valley can be reached by a good road from the well known tourist resort of Bled. But again, the road goes only by the south bank of the Bohinj lake and the mountaineer must climb the whole height difference to mountain peaks. If you have a good map, perhaps you will find a forrest road, starting in Bohinjska Bistrica and climbing up to the altitude of 1000 meters.

From the west bank of Bohinj lake a cable car can take you to the altitude of 1540 m (Rjava skala). This is one of the most renowned panoramic points in Slovenian Julian Alps, opened to the mass tourism. In winter there is also a good ski resort.

Starting from the east some most important peaks of the group are:

Routes in the South Bohinj Ridge mountains are mostly hiking routes. Only a few boulders in valleys and a few higher crags are appropriate for climbing. The majority of hiking routes is not difficult, but some of them require experience and some are also secured with pegs and steel ropes. Many routes are well marked (red circle with a white spot inside), but there are also many old shepards, hunters and forresters paths which can require good orientation skills.

Concerning mountain routes there can be many interesting combinations. They can be described on separate mountain pages or route pages. Here I will only outline the Grand crossing of the whole ridge:

1. Reach Črna prst (1844 m) - either from Bohinjska Bistica (3 h 30 min), from Podbrdo (3 h 30 min) or from Soriška planina (4 h - 5 h). In the last case you will really do the whole ridge.
2. Continue hiking over the main ridge to Vogel (1922 m). A well marked path goes mainly by the top of the ridge. After 4 hours you will be drunk of panoramic views!
3. Descend southwards to Koča na planini Razor (hut, 1315 m). There enjoy best-ever home made food and sleep over night.
4. Ascend Vrh nad Škrbino (2054 m) and continue by the top of the ridge westwards. Over Kuk the marked path goes all the way to Vratca (Pass, 1803 m). You will need almost 7 hours, and from there, you still need to descend. The best option is Bohinj (4 hours).

There are several beautiful ski tours, here I will mention only a few:

No limitations. Keep nature as it is now. The whole range is part of the national park. If you are carying a tent you can sleep anywhere, but leave no trace behind. Have in mind that these mountains almost completely lack water.

Early summer is best to admire flora. But in June days are rarely clear there. It is still best to choose a clear day with best visibility. These are most common in autumn. In winter many peaks can be reached by skis - offering some best possibilities for tour skiing. All the best ski descents go towards the north.

In Bohinj, by the lake there is a good camping place.

In Bohinj valley and around Tolmin you can find some hotels and private rooms.

Older History of the Page