Mt McBride is the seventh highest summit on Vancouver Island and from the normal viewpoint from Buttle Lake to the east, looks like something transplanted from the Rockies. From this aspect, vertical cliffs drop over a thousand metres to Copperbush Lake in the Marblerock canyon below. Thankfully (for this writer at least) an easier route to the summit exists.

Situated 6 km to the west of the approximate centre of Buttle Lake in Strathcona Provincial Park, Vancouver Island, BC, McBride lies above the Wolf and Marblerock drainages at the end of a ridge running ultimately south to a junction with Greig Ridge and then west to another junction with Phillips Ridge. This ridge system forms the basis of the eastern approach for those aiming to climb The Golden Hinde, the highest peak on Vancouver Island.

Initial access is by boat since there are no roads on the west side of Buttle Lake. Once across the lake, however, onward access is easy enough via Parks’ engineered and graded Marble Meadows Trail. 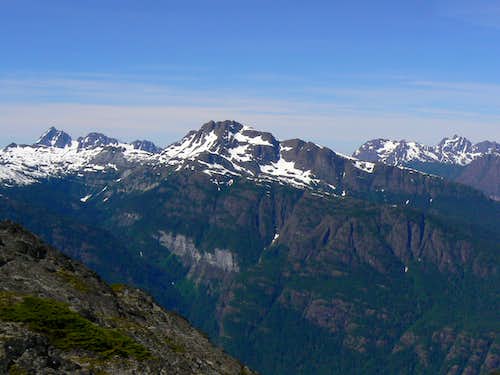 Mt McBride from Mt Adrian
It is, however, a long day to summit McBride from any of the usual base camps on Marble Meadows. The mountain looks close. In fact its summit is only 500-600 metres above the average height of the Marble Meadows plateau and only 3 km as the crow flies from the Wheaton Hut there. However, it isn’t reachable directly and a trip there and back would involve typically 17-18 kms of travel with over 1,500 metres of total relief to deal with.

The rewards, however, are superb. If the weather is fine, almost the whole of Strathcona is visible from the summit in one stunning 360° panorama. Once on the ridge system described above, all the really big peaks on the Island: the Hinde, Rambler, Colonel Foster, Elkhorn, Kings Peak and even the distant Victoria and Warden Peaks, come into view and remain that way.

Mt McBride is named for Sir Richard McBride who was the Premier of BC in 1911 as Strathcona was being established and who had no small hand in this momentous event. 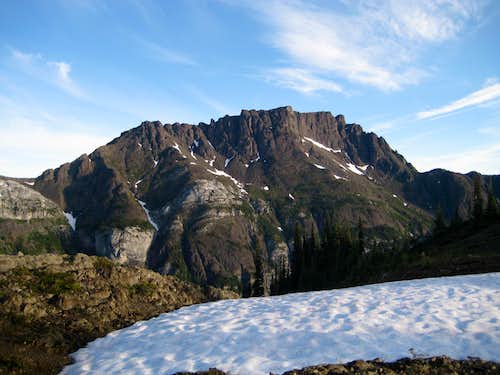 Details regarding the initial approach are exactly as those for Marble Meadows on the parent page and for the eastern approach to The Golden Hinde.

Vancouver Island can be reached by air from Toronto, Vancouver, Seattle, Calgary and Edmonton to Victoria, Nanaimo, Comox or Campbell River and by ferry from Port Angeles to Victoria on The Coho and on BC Ferries from Vancouver to Victoria or Nanaimo. Public transport on the Island is notoriously poor and anyone arriving by air would be advised to rent a car. Road access involves driving only on paved roads, so a normal 2WD sedan is fine.
From Campbell River, at the end of the freeway section of the Inland Island Highway 19, take highway 28 west towards Gold River. After approximately 30 km the road meets Upper Campbell Lake and after 47 km you will enter Strathcona Park at Elk Portal. Exactly 1 km further on, highway 28 makes a right turn over the bridge at Buttle Narrows. Ignore the turn and carry straight on down the paved Buttle Lake Parkway (also known as Westmin Mine Road). 21 Km after passing the turn-off for Gold River, park at the Augerpoint day use area if you are using a canoe or kayak. If you’re using a power boat it can be launched from Karst Creek a few kilometres beyond Augerpoint or simply launch it from Parks’ campground at Buttle Narrows – just across the bridge to Gold River – and motor 15-20 minutes down the lake.

Cross the lake to the outlet of Phillips Creek, where there is a marine campsite with facilities. Avoid a late afternoon crossing in a small craft. Winds funneling up the valley can make the lake very rough.

From Phillips Creek, Parks’ excellent, switchback trail takes you in about 4 hours up to the plateau crest. Make your base camp by any of the stunning lakes west of here or proceed to the A-frame Wheaton Hut – the only such hut in Strathcona Park – with Wheaton Lake nearby. Well cairned and booted-in paths follow the north side of Limestone Lake and traverse both sides of Globeflower and Marblerock Lakes to the Wheaton Hut in 1-2 hours from the crest.

From the Wheaton Hut follow trails west onto Wheaton Ridge and then down to a low point at N49° 41.626 W125° 39.301. Go north from this point to lovely meadows with ponds and braided streams before turning west once more and going up to the limestone crest at the head of Marblerock Creek. You are now passing through one of the principal limestone areas of Vancouver Island as described in the Marble Meadows parent page. The day may be subject to considerable delays as you spend more time fossil spotting than hiking!

Ascend on the left of the crest aiming for the waterfall coming off the ridge that connects Morrison Spire and Mt McBride. Climb up to the ridge on the right of the waterfall on snow or loose rock to the neighbourhood of N49° 41.792 W125° 39.823.
Turn right and walk along the wide-open ridge with superb views of the Golden Hinde, Rambler, Mt Colonel Foster, Elkhorn etc. Finally descend to the col above Copperbush Lake at N49° 42.642 W125° 39.807. Distance from the point at which you attained the crest is about 1.8 km.

Go down off the col to the left but try to avoid losing elevation as you traverse across to the skyline ridge to the northwest. Once over the crest of the ridge traverse gradually back to the northeast and up to join the north glacier of McBride by the most favourable line. There are many to choose from. Depending on the choice, a little scrambling may be required.
Go up the easy north glacier to the summit continuing to trend northeast – a distance of about 400 metres.

The summit has a cairn and a new (2005) register provided by the local section of the Alpine Club of Canada.

The all round views are simply breathtaking as is the 1000 metres drop right off the summit and down to Copperbush Lake. 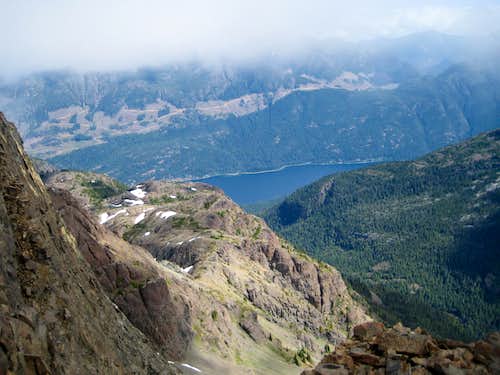 Buttle Lake from the summit of Mt McBride.

None. You’re outside the Strathcona Park core area where camping fees are due.

Anywhere you like in Marble Meadows or save yourself the extra weight of a tent and stay at the Wheaton Hut. But please respect this beautiful and delicate place. Stay on trails even near campsites, hang food bags out of reach (even in the hut), clean up all cooking scraps, practice good toilet discipline etc.

Giardia is well documented throughout Strathcona Park, so boil or treat all water.

Fires are strictly prohibited, so you must pack a stove.

Bear and cougar frequent the mountains and forests of Vancouver Island, so hang or otherwise isolate all food at night.

Be aware that BC Parks does not operate an intentions system. Make sure, therefore, that you have left a detailed trip plan with someone responsible. The RCMP and the appropriate SAR agency will respond in an emergency but it is up to you to have the mechanism in place that will initiate the call-out process if it becomes necessary.

There is line-of-sight from the summit of Mt McBride to the cellular repeater tower on the summit of Mt Washington. However, I found that signal strength was spotty at best and only then by standing right on the summit (with that 1000 metres of exposure below). One or two metres below and there was no signal. There is no service anywhere else on any of the approaches or sub-summits described above.

Map required for this trip is the government 1:50 000 topographical map sheet 92F/12, “Buttle Lake.” Advance copies can be ordered at BC Government Maps on-line. Copies are usually readily available in good bookstores and outdoor stores throughout the Island. 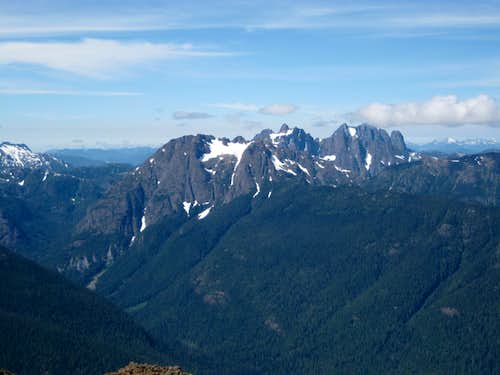