Our day started out pretty early. We left Seattle about 5:30
am, to ensure that were the first people at the ranger station for Price XC
permits. After driving through an hour of rain, we finally rolled in to Glacier
about 7:40 and were the first car in the parking lot. I ran into the bathroom
quickly and by the time I came out, 3 other parties, in rapid succession, had
joined us. Luckily one of my climbing partners jumped into action and made it
out of the car and to the ranger station door first. Thus ensuring further that
we would get one of the two permits we hoped were left for that morning. After
hanging out with Bart the glacier dog for a few minutes, we were on our way.

We made it to the trailhead and were then joined by a guided
team of 10. We spent most of the day leapfrogging them to camp. The trail was
in great condition, no major stream crossings, logs, or snow to contend with
and the patches of snow along the talus field actually made it easier to follow
the traverse to the base of the chimneys (I forget how great it is to approach
on maintained trails as opposed to unmaintained climbing trails). We made it to
Lake Ann in two hours and then started the scramble up towards the talus fields
and the chimneys.

We got a little off route (we missed the trail leading
towards the talus fields after the first bit of class 3/4 scrambling). One of
the guides (who at the time, were behind us) called out as they were passing below
that we were taking the “class 3 grass path” variation. I blamed it on my climbing
nature of constantly want to go up. We scurried across some extremely loose
choss and were able to easily get back onto the traverse towards Fisher
chimney's. 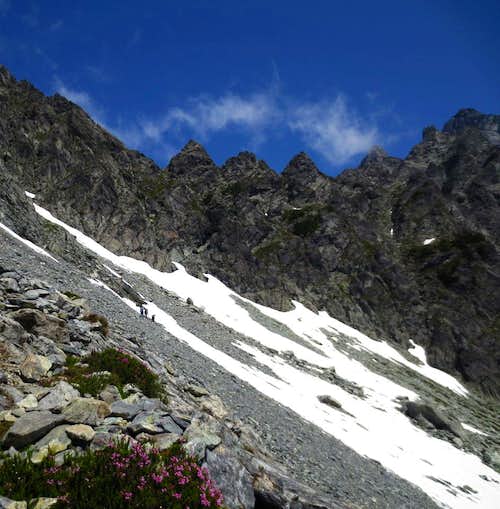 Snow patches through the talus field make the trail to the
chimneys easy to follow.

The chimneys are easy to find, because as stated by others,
there are spray-painted arrows that lead the way. I do not know how long ago these
were added, but I’m sure Beckey and most others (including myself) don’t
encourage such actions. We did not rope up for the chimneys (or at all the
first day) as I know some do. The rock was dry and there was no snow.  There are multiple “routes” up the chimneys,
but really if the rock is loose and sliding, you are probably off route.
Following the crampon scratches is usually fairly easy as well. 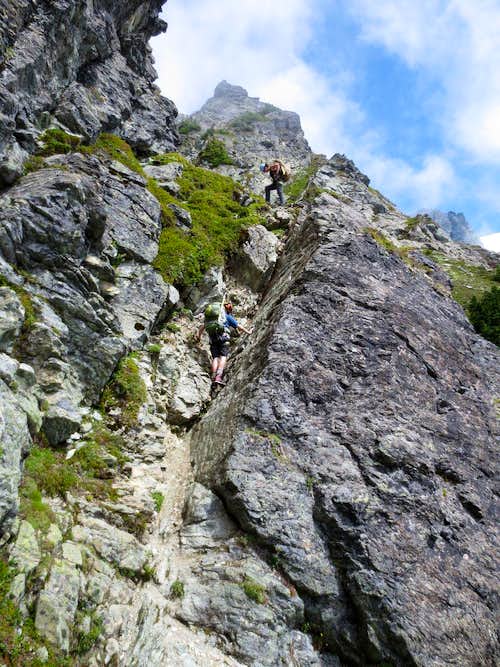 Starting off the chimneys

We were making great time until disaster struck (or almost
struck, I should say). Somehow my crampons, which were strapped tightly to the
outside of my pack in a pocket, fell off and started tumbling down a gully
(mind you, not the gully we climbed up.) I down climbed a little, to investigate
their final resting place. Luckily I was able to spot them, about 40 meters
below, on a shelf. I ditched my pack and slowly down climbed to rescue them (and
save our chances of finishing the climb the next morning). After berating
myself internally for being the type of person that drops gear (first time, I
swear!) we were off again. Back on snow after toping out the chimneys, we set
up high camp (with 2 other fairly large parties) at the top on Winnie’s slide
around 4 PM.

The next morning we were off and rolling (after a missing
sock debacle at camp, more to come on this later) a little before 4:00 AM. From
the top of Winnie’s there are two options for getting onto the glacier, the
4/low 5th class scramble and the short ice field. We opted for the ice
field. The ice was very solid in the morning and were we getting great purchase
with our crampons.  We started the ice
field a little too far climbers-right, but quickly traversed to follow closer
by the rock.

The Hourglass and Hell’s highway were in great condition, no
real crevasses or snow gaps to navigate. The transition onto Sulphide glacier
from Hell’s highway was clear as well. At the Hell’s highway/Sulphide junction
we stopped for a little break and I took my pack off to change my glasses. In
so doing I grabbed the hood of my jacket and found a little present. No, not a
used blue bag, just my missing socks from the morning, hanging out in my jacket
hood! 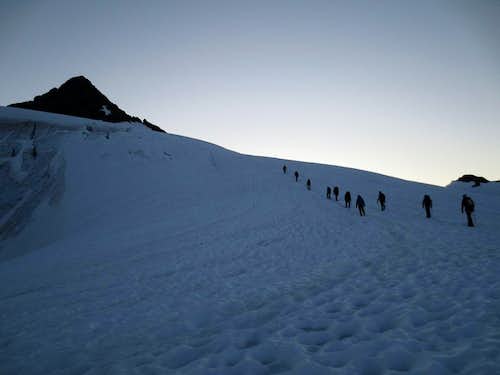 We knew, climbing on a weekend that once we joined up with
the Sulphide route there would be a fair number of people. But once we reached
the summit block and the start of the SE ridge, we were not prepared for what
we encountered. There was a team of 8 from a climbing organization that shall
remain nameless ahead of us. They informed us that the guided team we were
leapfrogging yesterday had just jumped ahead of them, but that they would be
off soon. So we waited, removed our crampons and started to get ready for our
transition to rock. We assumed they would be simul-climbing or quickly pitching
the route out (which people less comfortable with their rock climbing ability
often do).

As it turns out, this group was setting fixed lines all the
way up the summit block. One person was leading and then the other 7 were
following. This blew my mind, and to be completely honest pissed me off just a
little. Given their pace and comfort level on the rock, they might have been
better off on the 4th class route. As a team of 3 who were
simul-climbing, I expected for them to let us pass. No such luck. We spent
about 2 hours stuck behind them. (It was so bad we considered down climbing and
ascending up the gully-rap route to our left). As the leader of our small
simul-team, I kept trying to find ways to safely get around them. But a party
of 8 at each belay station, if you can even call them that on a low class 5
route, is not easy to navigate around. With the safety of my team and the
safety of their team in my mind, I chose not the attempt passing them. They
finally let us pass (when they were unsure of how to start the last “pitch”)
and we made it to the summit at 10 AM, two hours behind when we hoped to
arrive. Luckily, the weather was incredible, and I chocked all our waiting time
up to sunbathing with amazing views. It’s always best to remember that climbing
is fun. 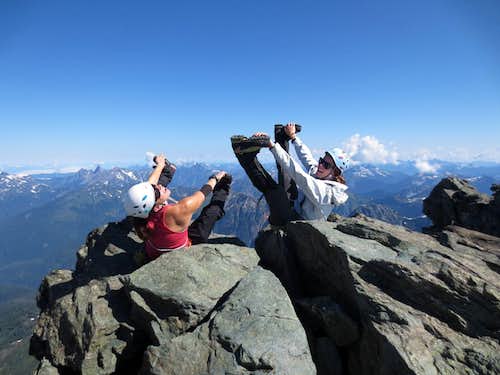 
The descent was fairly uneventful. We reached Hell’s highway
again at 2 PM and after assessing the snow condition to still be fairly solid,
we descended without setting anchors. 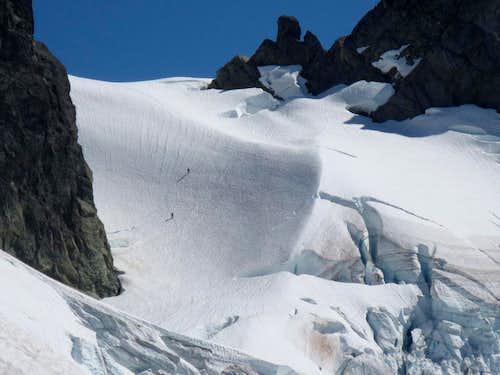 
Once at camp, a little discouraged about the time and I like
to think a little affected by all the sun we were soaking up, we spent some
time resting and packing up camp.  This,
of course, added even more time to our descent. The only note about the descent
was that we had a bit of difficulty transitioning from the low-class 4 scramble
by Lower Curtis Glacier back onto a snow patch to the trail. The snow had
melted considerably during the day and we were left with a major moat all
around the rock. I was able to find a decent rock to stand on and effectively
belly flop onto the moat with my axe to stop my slide. There very likely could
have been an easier way, but as it was starting to get somewhat dark, so
looking around became less viable. Much to our surprise as we made it to the
trail we saw 4 headlamps still coming down the chimneys. I was very glad to not
be them in that moment.

All in all, we had a great time on this route. If you like a
variety of terrain and are generally as apposed to long often uninteresting
slogs up glaciers (which let’s face it, are fun and everything… But who doesn’t
prefer some variety and bonus points when its alpine rock, am I right?). As far
as I know, we all made it to work at reasonable times Monday. Long live alpine
weekends.