"Mt. Shuksan epitomizes the jagged alpine peak like no other massif in the North Cascades... it has no equal in the range when one considers the structural beauty of its four major faces and five ridges...There is no other sample in the American West of a peak with great icefall glaciers derived from a high plateau, and in the Pacific Northwest it is the only non-volcanic peak whose summit exceeds timberline by more than 3000 feet... Shuksan is one of the finest mountaineering objectives in the North Cascades and its reputation is certainly deserved; a wide variety of challenges can be encountered on this quite complex mountain. The climber has a choice of rock walls, moderate firnfields, steep ice, and easy scrambling. Despite a sometimes-forbidding appearance, Shuksan has yielded 14 routes, numerous variations, and impressive subsidiary climbs, including some directly up dangerous ice cliffs." - Fred Becky (Cascade Alpine Guide : Rainy Pass to Fraser River) Shuksan is one of the most photographed mountains in the world for it's striking beauty and easy access. It is ranked #13 on Washington's Highest Peaks (#10 on the Bulger List), #60 on Washington's Steepest, is on Fred Beckey's Great Peaks of North America, and has 4,411 feet of Prominence (#13 in Washington). It also has a route listed on North America's 50 Classics list. The mountain's name Shuksan comes from the Native American (Lummi tribe) word šéqsən, which means "high peak". Shuksan is located in the North Cascades National Park at the edge of the Mount Baker Scenic Byway. Shuksan Arm is located in the Mount Baker National Forest. 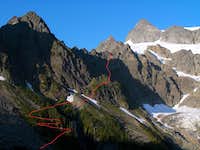 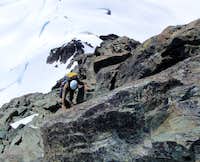 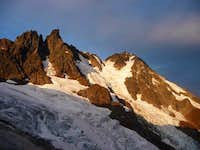 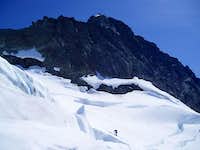 Sulphide Route (Class 3-4):This is the easiest route up Mount Shuksan as well as the most popular on the mountain. It's relatively straight forward under good conditions and of course good directions. Like any other route up Shuksan it requires glacier travel and has a exposed scramble near the end of the climb. Some say class 3, others say class 4. To be safe I say class 3+. Fisher Chimneys (Class 4): This is the second most climbed route on the mountain and is considered perhaps the shortest in terms of distance. The route consists of class 4 scrambling, crossing a few glaciers, and icy sections in late season. Certainly a quality route that is a great alternative from the Sulphide Glacier with a good mix of alpine elements. North Face (50 Degree Snow): "The North Face of Mt. Shuksan is a serious snow-and-ice route of moderate steepness on one of the most beautiful mountains in the Cascades. No route on Mount Shuksan is more dramatic than the seldom-done North Face, which ascends the snow- and glacier-clad shoulder dividing the White Salmon cirque from the Price Glacier cirque. The North Face route offers the classic Mount Shuksan challenges: approach difficulties through a valley choked with slide alder, problems with routefinding on the complex peak, and the physical demands resulting from the sheer size of the mountain. But it is a rewarding and direct route to the summit with a satisfying feeling of openness and exposure, a sublime setting, and a view down to Price Lake, milky with glacier slit. The climbing is 40- to 50- degree snow and ice. As with all such routes, snow conditios can be a major variable. Good snow (cold and hard) makes for a pleasant and enjoyable climb, while soft snow can make for a terrifying and possibly dangerous experience. Any climb of Mount Shuksan can be considered strenuous." - Nelson and Potterfield's Selected Climbs in the Cascades Price Glacier (Class 4, Grade IV): "Made famous by its inclusion in 'Fifty Classic Climbs of North America', Price Glacier dominates this most impressive aspect of one the most iconic North American peaks. After its inevitable first ascent by Fred Beckey it was heralded as the hardest alpine ice route in the contiguous United States. Today, most competent alpinists will want to take two to three days to approach, climb, and descend via one of the easier routes. Familiarity with the chosen descent is advised. Beware that this route has objective hazards; I nearly got the chop when a TV sized rock came down the gulley between Nooksack Tower and the main lobe of Price Glacier... Get an early start and climb fast. Some parties have bivied on the route, an unappealing proposition." - ExcitableBoy Southeast Rib 5.4: "The Southeast Rib is an airy alternative on somewhat exposed, high quality rock on a buttress running just to the right of the gully. Views along the buttress are commanding. While slightly more technically difficult, it is worth it. Most parties rope up on the glacier anyway, so one's only extra weight is a few slings and some rock shoes." - mrwsierra This route can be a great alternative from the standard south face gully when it is filled with snow. Northwest Arete (5.7, AI2+): "A long Cascade adventure climb with a full array of mountaineering challenges including bushwhacking, complex routefinding, runout and loose rock climbing, moderate alpine ice, and extensive glacier travel." - Z-Man 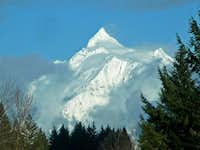 Shuksan View from the Road

Sulphide Glacier Directions: View Google Map Directions. From Seattle: Take I-5 for about 60 miles until you get to Mount Vernon, take a right at exit 230 onto Highway 20. After about 0.2 miles be sure to take a left onto S Burlington Blvd (this goes North). After 0.4 miles take a right back onto highway 20 (at this part of town it is known as Avon Ave). In about 22 miles you will see a road called "Baker Lake Road" which will be on your left, take this road for about 23.5 miles. From here there is a fork in the road, be sure to go left which goes onto NF Road 1152. Follow NF-1152 for 4.3 miles. Turn right onto NF-11520 which will take you to the trailhead (2,500 ft). The road may be snow covered in early season making it a longer approach. Many decide on bringing ski's to make traveling faster. Fisher Chimneys Route: Head north on I-5 until you get to Bellingham. At exit 255 take a right onto highway 542 (East Sunset Drive). Follow the highway for 55.4 miles which takes you to the Mount Baker Ski resort. Drive one more mile to Austin Pass (4,700 ft) which will be on your left.

Hike the trail on an old logging road bed to the end in a brush-covered clearcut. Hike the trail steeply up onto Shannon Ridge above into the virgin forest. Follow this trail in forest to the open ridge with views of Mt. Baker. Then hike the ridge to its end below a pass that leads onto the southern flank of Mt. Shuksan. 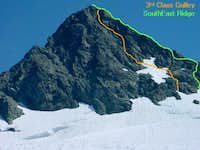 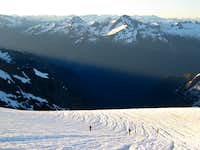 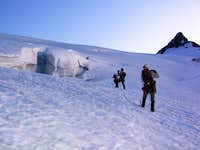 Typically to get off the summit block climbers do a few rappels down the south face gully. This can be down climbed as well, but is a bit exposed. Once your off the summit pyramid, go down either the Sulphide Glacier or the Fisher Chimneys. The Fisher Chimneys is used for a descent route from the North Face, Price Glacier, or the Northwest Arete. Depending on your planning and the time of year the White Salmon Glacier is an option. However be warned that the White Salmon can be tricky especially in bad weather! 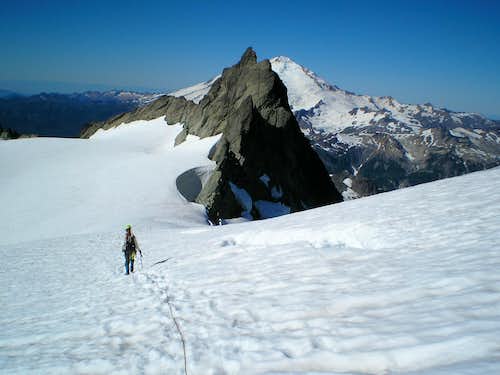 Heading Out near Hells Highway

All trails and some picnic areas and campsites on the Mt. Baker- Snoqualmie National Forest require a regional pass costing $5/day or $30/year. Golden Age and Golden Access Passport holders may purchase the above pass at a 50% discount. The Golden Eagle Passport will not apply to the Regional Northwest Forest Pass. You can get them at these stores or these ranger stations. The pass can also be purchased online from the Washington Trails Association. A backcountry permit is required for overnight stays within the National Park, which includes camps on Shannon Ridge and on the mountain itself. 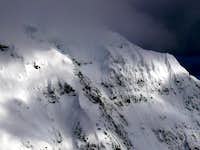 Sun Light on the Edge 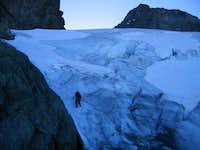 July through October are ideal months to climb this peak. Late July to August is prime time to climb the standard routes due to conditions and weather. The standard routes are still fine in September/early October but have more crevasses and aren't as pretty. In late season the glaciers are much icier, some routes will require ice tools and ice screws. June and early July tend to have a lot of bad weather days making it questionable to make a successful ascent as well as the south face couloir being filled with snow. As October rolls through, snow and rime arrive as winter comes in. The rest of the months are very snowy on Shuksan. But it can be done during winter with caution, steep snow climbing, and good conditions.

For the standard route you can camp on Shannon Ridge as well as a few places along the Sulphide Glacier. On the Fisher Chimneys you can camp at Lake Ann (4,700 ft), a bivy spot after the Chimneys, or after Winnies Slide just before the Upper Curtis Glacier. I suppose it might be possible to camp at the top of Hells Highway but it isn't ideal. A backcountry permit is required, and can be obtained at the same ranger stations as were mentioned under Red Tape above.

Ideally this peak should be climbed in good conditions. Lenticulars form quite often when bad weather approaches this peak. Plus you don't want to miss the exciting views. For current weather information on Mount Shuksan check in with the Noaa Forecast. For Avalanche Conditions, check in with the Northwest Avalanche Center. (Limited based on the season) Check in with the National Forest Website for more information on the current road conditions which it will say for "Shannon Creek 1152/1152014". There is no up to date website for the trail conditions for Mount Shuksan.

Mount Shuksan with a Lenticular Forming 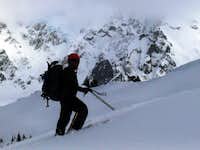 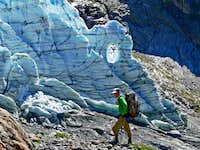 Loaded Up with a Heavy Pack 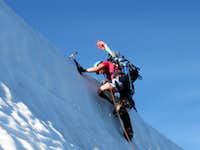 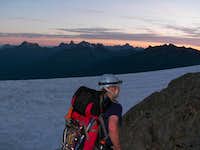 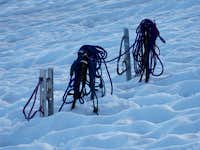 Here is a list of pretty much everything that you will want/need for this climb. Keep in mind, this list only applies to the standard routes. The more technical routes will most likely require more gear and technical training. Mandatory Gear for the Climb:

Mount Shuksan was first climbed by Asahel Curtis and W. Montelius Price on September 07, 1906. In honor of their climb they have three major glaciers named after them on the mountain.

Mount Baker is on the left, Shuksan is on the right. 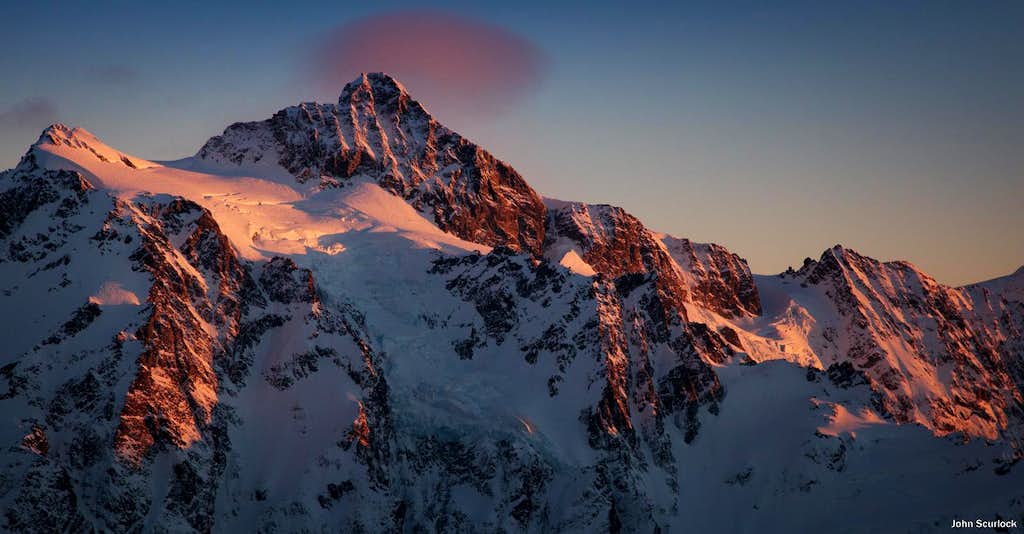 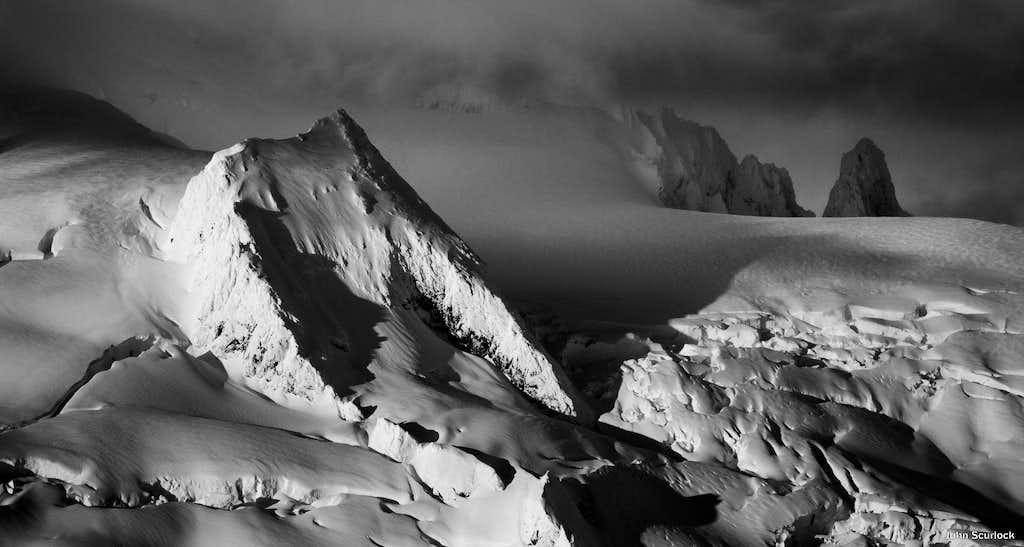