Mt Washington in All Its Rimey Glory

On April 1, we loaded the truck and were ready to make siege on Mount Hood's Leuthold Couloir. After getting rained on for 1,500', we elected to turn around and come back on another day. Feeling slightly depressed, we elected to check out the climbing on Mount Washington- one of our favorite 'run-ups' in the summer.

We drove to Ray Benson Snow Park in the morning and stepped into our bindings at the true alpine hour of 9:30am. The sun was out and we were psyched. The skin from Ray Benson involves a long, 3-mile slog on snowmobile-tracked snow. We made relatively quick work of it but it wasn't exactly thrilling. From there, we wound our way precariously through dense trees, making steady progress toward the West Bowl, our planned route of ascent. 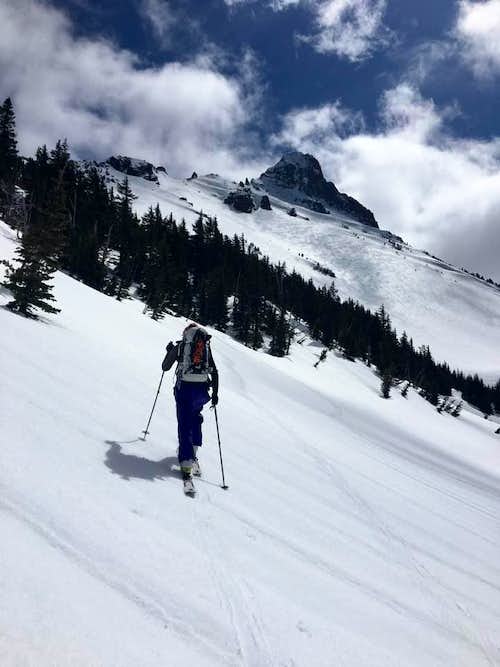 Given the nearly-perfect temps, we were pretty sure that at least the ski descent would be amazing and were excited to see a couple of other folks (in fact, the only other non-snowmobilers we would see all day) ripping their way down the bowl. The snow was pretty frozen still but their 'whooping' inspired confidence that at least the terrain would be worth it. 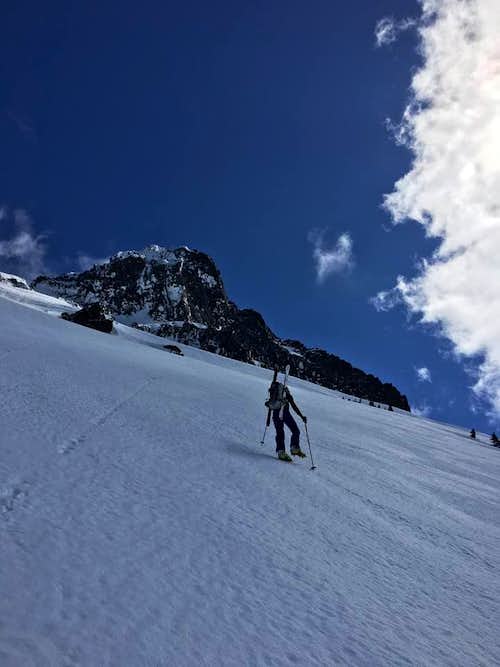 Finally emerging out of the trees, we took note of the summit spire- rime, snow and ice caked it entirely. Psyched to check it out, we put on ski crampons and skinned as far up the bowl as we could before making the efficiency-decision to put on actual crampons and pack our skis to ~6,500' where we left them, geared up for some actual climbing and made our way to the col. Andy was ready first so he took the lead, the mild sastrugi and snow feathers catching the rope at intervals and making simul-climbing an annoyance. Andy quickly discovered that one edge of the col was a large cornice- using a tool to punch a hole through to daylight on the other side. (REMINDER: Always make your terrain assessments slowly!). 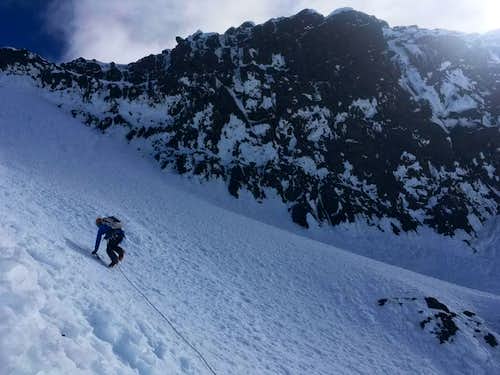 After evaluating what we could see of the climbing, we elected to pitch it out- Andy taking the first pitch, Corie the second, and so on . After about 60' of climbing, we decided to bail. Rotten snow, crumbling ice, and funky mixed-climbing yielded slow climbing and barely protectable conditions. To top it all off, the col was windy as hell and, the sun was disappearing into a cloud bank- reams of an epic, spring-skiing excursion on the way out were rapidly devolving.

We descended back to our skis, feeling a bit dejected, and got ready for some turns. A few yards of bone-chilling, teeth-grating skiing later, we came to terms with our situation: no corn would be found on this day.  Mount Washington took another point. After a series of unfortunate events (including Corie losing her shit and crying during a particularly treacherous section of ski-ice-traversing and one of Andy's skis flying 400' down the bowl of its own volition), we finally made it back into the trees and enjoyed several hours of horrible skinning up, around, and over (and on a couple of occasions, into) tree wells before hitting the road for the 3-mile ski out.

For more info on this climb- and a video of the summit spire- (or beta for a summer/dry rock ascent), check out our site: http://www.mountainrefugees.com/single-post/2017/04/02/Mount-Washington--Attempt