Ahead of us is a true Karavanke/Karawanken tour: A long ridge crossing. And it will be peppered too with quite some climbing details. We shall start the tour by the south portal of Ljubelj/Loibl tunnel and ascend by the old road on Ljubelj/Loibl pass, where the real crossing begins. We shall follow old frontier paths, which are on places already barely seen and hardly passable. Over the peaks of Ljubeljscica (this is the name for the ridge between Ljubelj and Zelenica), where on one place also a steel cable will help us, we shall reach Zelenica. Here the second part of the tour starts: the three sharp towers, named Na Mozeh (means On Men). We shall climb over all three of them, on one place we shall also need to abseil down. After this part the third, easier, but quite long part of the crest begins. Also this part is not just easy. On some places we shall still need to climb a little and all the time we'll have to search for the right passages. Having behind the biggest and hardest part of the ridge, the summit of Palec will be still far in front of us. When we shall finally step on its peak, we'll have in our pocket one of the wildest mountain parts of Karavanke/Karawanken range. For this tour a stable weather is the necessary precondition, although there are many possibilities to escape down from the ridge. And it will also go hard without a rope, although tose most daring would be able to find passages not to need it. If the described tour is too long, you can divide it into three parts: the first one from the old Ljubelj/Loibl pass to Cez Pod saddle, the second from Cez Pod saddle (easilly reached from Zelenica mountain hut) over Na Mozeh to the notch, where we can easilly descend by screes into Suho rusevje basin, and the third part from this notch to the summit of Palec. The value of this tour lies in the wilderness of the ridge. Especially impressive are the rugged Austrian slopes and views on Begunjscica, Suho rusevje, Zingarica and Kosuta in the background. 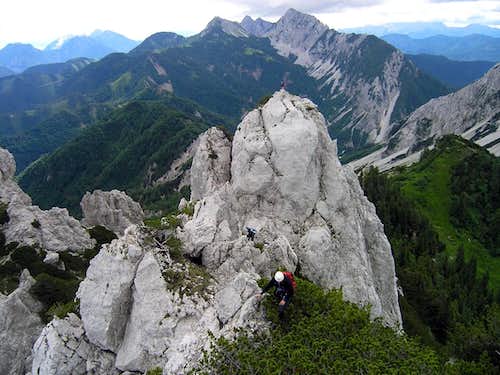 From the tunnel south portal we go by the old mountain road (closed for public traffic with a ramp) which winds up till the old pass, where the hut on old Ljubelj/Loibl stands. On the pass, where the road begins to descend on the Austrian side, still stand two obelisks with the inscription: 'Carolo VI. Caes. Max. MDCCXXVIII', devoted to one of the rennovations. By the hut we find the tiny frontier path, going by the undulated small ridge up and down. Time to time views on Palec and Na Mozeh open. Then we detour the first rocky tower by the right. On the other side an easy ascent option left to its top shows up. This is Povna pec, 1503 m. From the top we descend again a little by the ridge and come from the wood in a more open world, rocky and overgrown with dwarf pine. Over a partially exposed rubble we ascend on a grassy bump, where we see the inscription: 'Konec varne poti' (End of a safe path). We continue by the 'unsafe' path. Immediately in the beginning we cross a sharp sand ridge (exposed), in the continuation we cross up and down by a more rocky terrain, over a few small summits to a sharp rocky tower (exposed), from which steel cables help us down in the next notch (exposed). Behind the next bump the tiny path turns right below a big rocky tower. We go around it, and behind it ascend 100 more meters (the path disappears, demanding) on a ridge, where we step on a grassy, panoramic summit. We are just above Zelenica, behind the grassy saddle, named Cez Pod, 1686 m. Here the three Men are awaiting us. We have here the possibility to escape from the ridge - but only in the first, forrested part of the crossing.

Let's enjoy the panorama! The nature here is really wild. Especially fine are the rugged northern slopes of Ljubeljscica, Na Mozeh (towers, windows, steep ravines, etc.) and the view on the northern face of Begunjscica on the other side. Nearby, completely on the Austrian side, a sharp, 30 meters high tower stands, named Zgornji Plot/Noerdlicher Zahn. We continue over the dwarf pine covered bump (behind it is the upper station of the ski lift) and through dense pine bush area (there's a cut through) left under the ridge to the rocky channel (UIAA I). By it we climb on the ridge (UIAA II) and over slabs on top (crumbly, UIAA I-II). Then we shortly descend on the northern side (there's the anchor peg on top) and reach a steep, narrow chimney. Through it, below the rock, stuck in it, we reach the saddle between the first and second Man (UIAA I). Without problems we ascend the next tower (UIAA I), by the sharp ridge edge we descend into the next notch (UIAA II). We can ascend also to the right on a small tower or cross to the left untill we reach dwarf pines (UIAA II). From here we abseil 10 meters on a small grassy saddle. It's time for the last tower. We climb into a notch and from there left on the sharp peak (UIAA II). On the other side we descend over a short slab (UIAA I-II) and over dwarf pine and mixed rocky terrain reach a broad with pine bushes overgrown elevation. From each of towers we have a possibility to escape from the ridge on the southern side, only we shall not be able to avoid dense pine bushes.

Then an unpleasant crossing over two mixed rocky and grassy, very crumbly ridge summits follows (UIAA I). After them, we reach a big scree field (by an interesting sharp tower; till here you can easilly arrive from Suho rusevje basin, and so here the escape down is also possible). 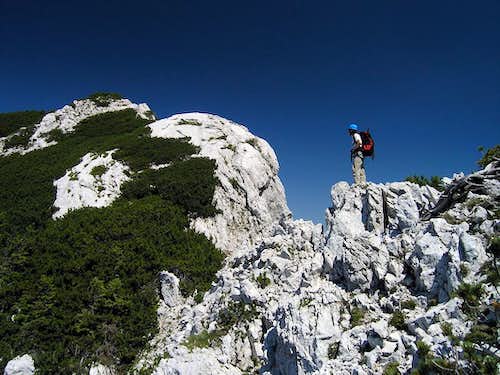 Now the third part begins. On the next tower we climb directly by the ridge (UIAA I), and descend from it by a channel (UIAA I), then we cross one ridge bump more and only behind it we can see the summit of Palec. On the next small peak we ascend without problems, and descend from it by a channel. Then a rocky part follows, where we go around by the left side. Over the next tower we go again by the ridge (UIAA I), but we can go also around by the right side. The next peak we can detour by the left or go over it. Then two bumps follow; we cross the first one, and also the second one. This has on the right side an interesting, exposed ledge. We are on a small saddle, where the normal ascent on Palec goes. Now we can again follow a tiny path - we reach the summit over a mixed rocky and grassy terrain. From this last part of the ridge we have only one possibility to escape down into Suho rusevje basin. Notice steep, grassy slopes towards the basin - there we can descend quite easilly, but much harder it is to find that place.

Till the last small saddle we go by the ascent route, there we turn right down. We follow a tiny path (below we shortly cross towards the right), so we reach the broad scree fields in Suho rusevje basin. By the good beaten path we continue down by the left side of the valley until we reach the marked path, connecting Zelenica and Stol. By it we go left on Zelenica and from there either by the marked path, the mountain road or the non-marked path, going lelow our ridge, down to the south portal of Ljubelj/Loibl tunnel. 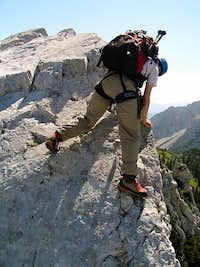 The tour is technically very demanding (for non-climbers). The ridge climbing is UIAA I and II degree, over one place we need to abseil. The rock is crumbly, the route is on some places very exposed. We recommend belaying and using a helmet, less experienced should be accompanied by a mountain guide. Orientation is hard, along the whole route we must seek for best passages.