The Northeast Ridge of Zerfreilahorn is a classic rock climb in the Valservalley. The route is located on one of the most striking mountains in Switzerland, the Zerfreilahorn (2898 m). Despite the fact that the route is re-bolted it is still an alpine undertaking. A retreat will be very difficult and dangerous, especially from the upper pitches. Though the grade maybe doesn't look very challenging you'll still need to be able to climb solid on Gneis. If you look at the mountain than you might don't expect a real ridge climb, which is true for the first part of the route. But, the second half does go along the NE-ridge. Overall you don't have the feeling of a real ridge climb, but that doesn't makes it less worth climbing.

The ridge is really worth climbing because it offers very raw granite like rock, which makes the climbing pretty technical. The route has bolted belays, and some bolts on the more difficult pitches. But most of the time you'll need to place your own protection, which is rather easy. The direct start is for those who would like to add two more challeging pitches. Overall the route is a little hard for it's grade, especially the last pitch.

To the Valservalley (Vals)
Vals lies at the end of a side valley in the Surselva area (Bündner Oberland). Vals is located in the middle of the Alps, or to put it simply: it lies between Milan and Zürich (Zürich – Vals 170 km).

By car: Autobahn (A 13 Chur - San Bernardino), take the Reichenau - Flims exit. Follow Flims – Laax to Ilanz, turn off towards the Vals Valley [Valsertal]. Follow the twisting road to Vals. 60km from Chur to Vals.

By public transport: Ilanz has the nearest trainstation. It is located on the Chur - Oberalppass connection of the Rhätische Bahn. From Ilanz there is a Postbus connection to Vals, which runs quite often.

To the start of the route
The approach from Chappeli (1900 m) is probably most common. Follow the wide track pass the Zerfreilasee and cross the Kanalbrigde. Take the path up (direction Furggelti) after crossing a small stream. Follow this marked path untill the angle of the slope decreases. Cross the Hornbach at about 2200 meters and scramble your way up to the base of the mountain (slightly left). Choose the direct start or the original line. For the original line you'll have to climb through a gully and traverse right on the grassy ledges.

There are two possible routes on the NE-Ridge, the original line and the direct line. The route is not very hard to find because there are some bolts that show you the way, or the line is pretty obvious. The last pitch is the crux!

Descent: there are basically three possiblities.
1. Rappel down the rappeling route, which is bolted for 50 meters rope (25 meters between the belays). And starts just east of the end of the route.
2. Rappel down the route 'Nanouk'. This is only possible with a double rope of at least 50 meters. Because this route is pretty steep, it rappels fast and easy.
3. Continue by traversing the Zerfreilahorn.

Essential Gear: helmet, climbing shoes, a small rack of nuts, a few cams, 10 quickdrawns and at least a 50 meter rope.

Unfortunatly the Zerfreilahorn lies on the intersection of three SAC-maps. Choose the map which suites your approach and climb! 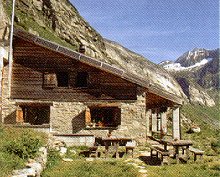