Scramblers can find a route to Mescalito's summit originating either from North Fork Pine Creek or South Fork, but the one from the North Fork is by far the more enjoyable and challenging. An excellent idea is to use this one for the ascent and the other for the descent.

Pine Creek has flowing water for much of the year, but do not take chances especially in summer. Carry plenty of water; once you climb out of the canyon, there is no water and you are in the sun the whole time.

This route is highly scenic and features a lot of fun scrambling.

Hike the well-trodden trail into Pine Creek Canyon. Mescalito is the aesthetic pyramid-shaped peak splitting the canyon. Numerous use trails begin to appear near the mouth of the canyon; the one you want branches off to the right and makes a shirt climb onto a bench. Follow this trail until it deposits you on the floor of North Fork Pine Creek Canyon not far from its mouth. If you miss this trail, you can follow the streambed (likely to have water and brush to negotiate) instead.

In the canyon, you will sometimes follow a trail, sometimes follow cairns, and sometimes have to find your own easiest way through the canyon to the first significant obstacle of the route. Rambles and Scrambles by Courtney Purcell says this is about half a mile up the canyon, but to me it felt about twice as long as that. However, the going was also somewhat slow because of the meandering nature of the route and the fact that it was my first time on it, so that could account for the perception of greater length.

Anyway, this obstacle is a waterfall (not too high but unclimbable and likely running as well). You have two choices here.
First, you can climb the low wall (about 20') on your left just before the waterfall. The easiest way up it is Class 4 if you start at the based of the large tree there. Be aware that this is a stout Class 4 that is arguably Class 5 and that it is exposed.
Alternately, spot a brushy-looking chute on the right side of the waterfall. It is not as brushy as it looks and goes at Class 2+. It's good for those not liking the exposure on the wall and for the descent. 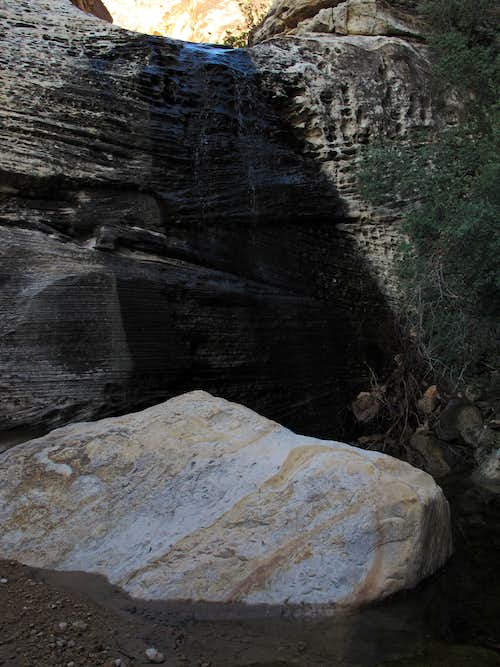 Soon after the waterfall, the canyon splits once again. Go right. The left fork dead-ends quickly beneath a high spectacular waterfall (likely dry or with only small flow).

Using the right fork, continue no more than 100 yards before finding a use trail on the south (left) side of the canyon. Follow this trail (it was cairned as of 2012) up sand and dirt to the ridge above, where you meet an imposing-looking sandstone face. 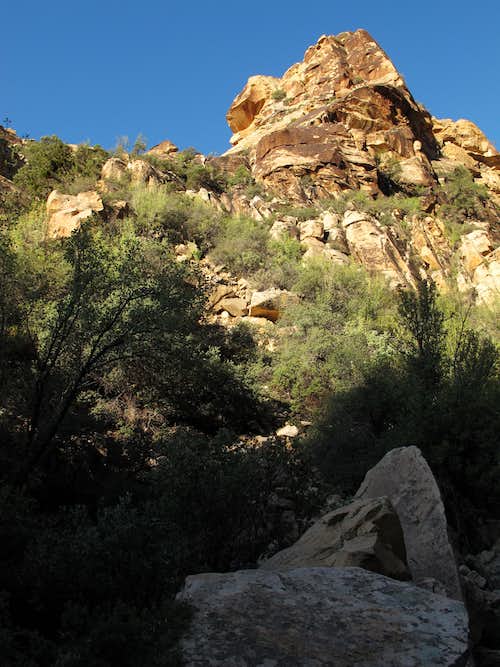 This face, about 100 vertical feet high, may look challenging but is actually as easy as Class 2. Appearances are definitely deceiving here! If you get onto something harder than Class 3, you're doing it the hard way. 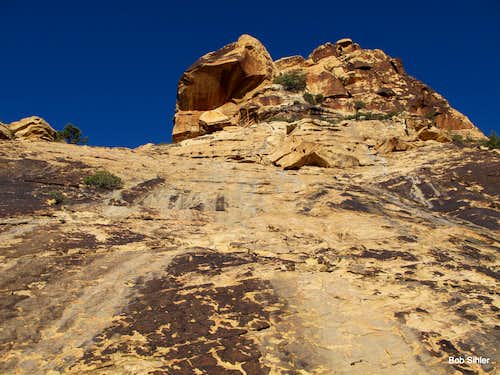 Next, the route (still cairned-- it is fairly heavily cairned most of the rest of the way) drops to a drainage. This drainage is actually the one that pours over the waterfall you see if you go left at the previous canyon junction, and you can get pretty close to the pouroff; it's a pretty spectacular spot. 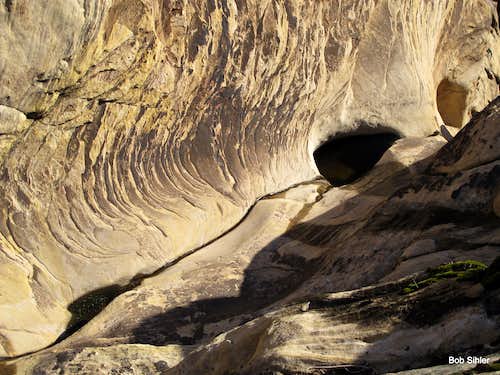 Here is where, in my opinion, the route is at its trickiest (and really the only tricky spot at all). You are going to have to cross the drainage and then climb to the ridges above, actually turning back east, to reach Mescalito. As you descend into the drainage, you'll think to look for a way on from the spot where the path of least resistance drops you into the drainage itself, but the continuation is actually a short distance downstream, and when I did this route in August 2012, I did have to waste a little time figuring this out since there were no helpful cairns present for this spot. However, it doesn't take much fighting the brush in every other direction to figure out that the way you've tried can't be the right one! Eventually, you'll wind up checking out the only really open option, and then you'll see ledges leading up a bowl to the ridge above, and you'll start seeing cairns again as well.

Atop the ridge, descend to a notch and then begin climbing up Mescalito proper. The way is mostly intuitive but still well-cairned, exposed in places (especially during a short traverse that comes soon after reaching the notch), and not harder than Class 4. 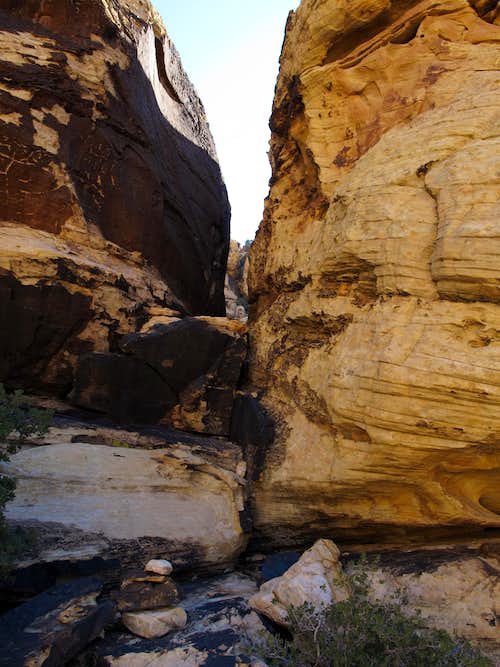 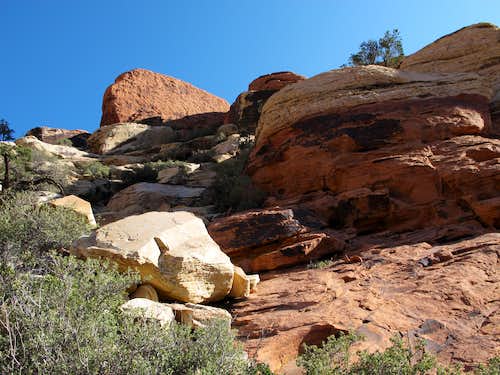 Enjoy the summit. Views actually are best if you continue a short way east and descend slightly to where the precipitous edge of the peak's east face begins.

Round-trip distance is 4-5 miles. Elevation gain is about 1000'. Plan for at least two hours to reach the summit since most of this is an off-trail route.

Inexperienced party members may want a 30-meter rope and gear for rappel/belay, especially if returning by the same route (they may want to rappel the wall by the waterfall in the canyon).