The North Rib of Mount Dana (III, 5.6) is the only known rock climb on the impressive north-northeast face of the mountain. It follows the obvious north rib that is just left of the Solstice Couloir and climbs to the summit ridge of the NW Slope. The climbing is mostly class 4 over shattered metavolcanic rock. There are, however, a couple of easy class 5 pitches.

Alpine Skills International says: "This great climb is about 13 pitches long. It has a lot of quick and easy climbing but is not for the 'faint of heart.' It contains areas of stacked loose rock but it is easily managed by a competent climber. The sections of polished, metamorphic rock provides interesting headwalls and corners that prove great climbing to a high summit."

Sorry that my photos from the first ascent are so bad. It was a very dark day on dark rock with very little contrast. Slide film just did not handle those conditions very well.

The approach is the same as that for the Dana Couloir and Solstice Couloir. 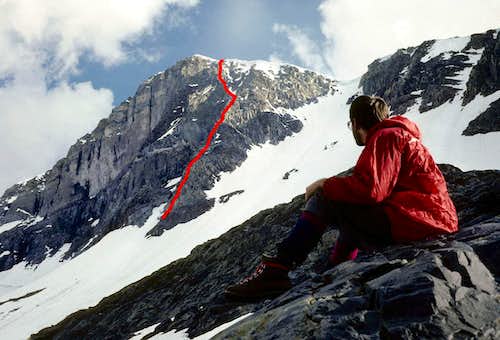 FIRST ASCENT DETAILS (MAY 1982): We started at the bottom of the North Rib and climbed directly up the crest of the rib. Route finding was relatively easy and straightforward. Most of the climbing was class 4 over shattered rock. There were a few easy class 5 pitches here and there, including a short 5.6 headwall. The route is approximately 10 to 15 pitches in length.

The lower part of the North Rib involves class 5 climbing. The middle section of the North Rib is class 3 and class 4. The crux is a 5.6 headwall. You could probably bypass this headwall by detouring around it on the right (class 3-4?).

You can climb straight up the rib on the right branch of the "Y" and through the cornices if you desire. However we angled left at a "Y" onto the left branch. The cornice at the top of that rib was smaller, only about 10 feet high.

The shattered rock takes small pitons such as Lost Arrows and baby angles. The larger cracks were loose but large Friends were also useful. The rock is too loose to just throw a sling around a block or horn.

If there is a cornice on top then you'll also need an ice axe, especially if you plan to descend via the Dana Couloir. Oh yeah, there's a lot of rockfall so wear a helmet.

If you started from the vicinity of Dana Lake below the north face, then you'll probably want to descend via the Solstice Couloir. Alternatively, you could traverse the summit and descend via the Dana Couloir. You should scout both couloirs for ice before you make a decision.

If you have suggestions for improvement, please contact me.