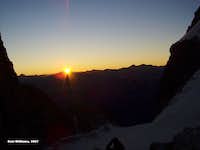 The Northwest Ridge of Mount Sir Donald is listed as one of the “Fifty Classic Climbs of North America” in Steck and Roper’s book first published in 1979. It was the site of a tragic accident last year and no doubt quite a few over the past 30 years (at least 8 listed at Alpine Accidents in Canada) due no doubt partly to its popularity of being published as one of the 50 classic routes in North America. I found the route to be sustained as advertised with several appreciated breaks. Route finding was quite simple, when in doubt, stick to the ridge, period. 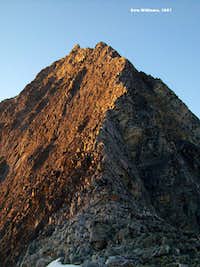 Mount Sir Donald is located in Glacier National Park, British Columbia (not to be confused with the US park of the same name located at the Montana/Canadian border). The TransCanada highway runs through Glacier National Park in the east side of British Columbia. Stop at the Park Visitor Center at Rogers Pass for your camping permit, whether camping at the col or below the col. Both sites have bear bins and open air pit toilets. The route can be climbed in a single push from the road, but does entail 7800’+/- accumulated gain, thus is almost always climbed in two days minimum.

Proceed west from Visitor’s Center and take your next left onto a park road that takes you to the Illecillewaet Campground on your right and Wheeler Hut up and to your left (hard to see from the road). Hike the Sir Donald Trail to its official end some 4.2kms. Take the left fork up steep switchbacks until you are forced to cross what can be a roaring glacier melt stream. If flowing hard, you can ascend the right side of the waterfall for an easier crossing above. If heading for the col, gain the moraine ridge to the west and follow the trail on top as it breaks through the rock band ahead and angles left for the col. If aiming for the new (2007) bivy spot below the col (where park officials really want the climbers), cross the moraine ridge to the west and follow a trail as it meanders left towards a glacier tarn and grassy shoulder, slightly southwest of the col. Look for a cairn on the moraine ridge well below its crest as for where to pick up the trail west. This spot will require approximately 3300’ gain and leave you one hour from the col. The col bivy itself of course puts you right below the ridge but will limit your descent options, check below. 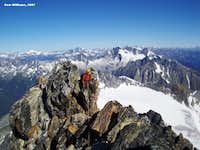 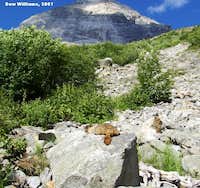 We took no rock gear and planned on soloing the route, each carrying a 30m 8mm rope for rappels. It struck me odd how much gear I witnessed on other teams for this objective. Therefore ascent time can and does vary greatly.. We started at the bivy spot below the col as we were told by one park ranger that was the druthers of the park. From this bivy, you still have to ascend approximately 1000’ to the col. Angle for the right side of the col on large boulders that eventually peter out to small scree. You will angle left on an obvious ledge that breaks to the center of the col.

We soloed up the first third of the route but after dislodging one small block of quartzite that left a gash in my leg, we changed to simul-climbing mode with a 30m roped doubled for approximately 14m in space which seemed ideal to place each climber on one or the other side of the ridge and/or obstacle. There are numerous rappel stations to clip into for “running” protection. We took four runners for such purpose and swapped leads whenever the leader was out of draws. We did not clip every rappel station, just when we sensed more exposure than average.

The guide book suggests that the route steepens towards the end, but we felt the climbing was fairly consistent and the end was no more difficult than the beginning except it obviously offered more exposure. From time to time we did enjoy some steep face and crack climbing, but most of the climbing was quite aided with slants and corners. There are two significant break sections, one approximately half way up and another about ¾ of the way up. There are numerous flat spots to eat, drink and/or take a nap. At the end of the day, you should feel this climb in your triceps to be sure.

As you ascend, look for the first bolted rappel station. This relatively new bolted descent route was put in by Jordy Shepherd and Eric Dafoe in 2002. Jordy added two more stations in 2004 for a total of 12 bolted rap stations with rappel rings. Four down the ridge, eight on the southwest slabs. He even took the effort of color coordinating them with streamers! The yellow station is the first you come to on your ascent and starts the long slab rappel off of the southwest face and thus off of the ridge. This descent allows parties to descend without using much of the ridge and thus staying out of each others way.

We took 3.5 hours from the col to summit. Most parties take quite a bit longer from what we witnessed and read. There was a summit register in 2007. We also enjoyed spectacular views of the Selkirks in all directions including observing a bear or wolverine ascend a glacier on the north side. 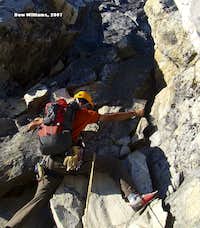 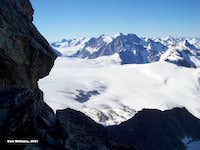 Traverse over the summit and descend down to the notch below, which takes all of 5 minutes. Continue down the gully below the notch involving some hands on down climbing. Once through the gully, look to the southwest for a white rock band well below on the summit buttress. You must circumvent below that rock band all the way back to the northwest ridge. Continue down the scree on slight switchbacks and find a traverse skiers right that works for you as soon as you are even with the white rock. Traverse below the summit buttress back to the northwest ridge not losing much ground. Once back at the ridge, down climb and rappel (we took two raps) back to the first set of bolts with rap rings. Make four more raps on the bolt stations paying close attention to the 4th rap which is the site of the accident mentioned above. Make sure you rappel in the direction of the station which is north. Rappeling south will put you in mid air with a 60 meter rope. Once at the 5th set of rappel rings, depart the ridge and make six 25m raps down the southwest face slabs of Mount Sir Donald. Be careful of rock fall if rapping on top of or below another party.

Once you reach the end of this section, put the ropes away and traverse left as you descend to the massive dihedral which more than likely will still have snow on its west flank. Locate two more rap stations on the slabs just to the west of this dihedral/snow where the snow gulley narrows. A total of 14 rappels on descent and quite a bit of down climbing get you to where rock meets scree. If you brought an alpine ax, take advantage of the snow gullies, otherwise, descend the large scree back to large boulders and back to the lower bivy site.

IMPORTANT: One of the advantages to using the “new” bivy site is that you can use this descent route and leave your camp below. If you camped at the col, you will either carry all of your gear up or retreat the entire ridge back to the col, ignoring this descent route.

Of course this varies considerably based on your climbing level. We took two 30m ropes and 4 runners. I climbed in lightweight mountaineering boots, Peter climbed in approach shoes. Boots offer a more pleasant descent when you hit the scree. I did use trail runners for the ascent to camp and that was more than worthwhile. There is glacier melt at the lower bivy but not at the col. Load up on water at the creek crossing if ascending on to the col. However, there should be snow on the north side of the col. Poles for the trek in are quite valuable, creek crossing and all. You will need an alpine ax and crampons if early season. We climbed in t-shirts to the summit, but got some looks from a party all decked out on the way up. The ridge can be surprisingly cold from what we were told by others who had climbed the day before.