Mount Sir Donald, a huge pyramid of Matterhorn shape, offers many splendid routes on good quality rock varying from 5.0 to 5.8, with no particularly easy way off. Sir Donald is the highest mountain along the Trans-Canada highway, located south of where it winds through Rogers Pass. It sits right in the middle of Glacier National Park of Canada, and is surrounded by dozens of other rugged peaks, all with imposing walls and glaciers that would inspire anyone. From the parking area one must ascend over 2,000 meters to reach the summit. Sir Donald is also highly identifiable from almost everywhere in the surrounding area. It can be seen from the Columbia Icefields, the Northern Selkirks and the Purcells. It stands noticeably above the surrounding peaks.

Mt. Sir Donald is famous for not only it's size and intimidating relief, but also for its history. The mountain was first climbed in the 1890 from the south by E. Huber, C. Sulzer and H. Cooper (porter). The peak was named for Sir Donald A. Smith, later Lord Strathcona and Mount Royal, a principal promoter of the CPR, Governor of the Hudson's Bay Company, Chancellor of McGill University, and Canadian High Commissioner in London. The famous Northwest Ridge (III, 5.4) was first climbed on 3 September 1903 by Edouard Feuz, Christian Bohren, and E Tewes. The upper third of the ridge was bypassed in 1903 and was first climbed in 1909 by A.M. Bartleet and Val Fynn. 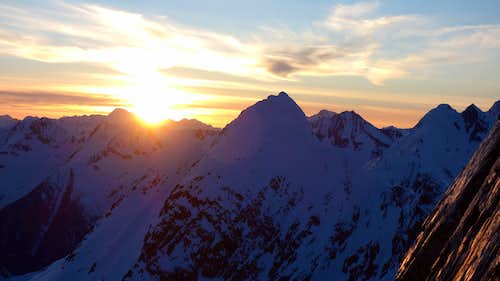 Eagle Peak at sunset on the standard rappel route

Sir Donald is located in southeastern British Colombia, near Roger's Pass. The Pass is located on the Trans-Canada highway between the two awesome towns of Revelstoke and Golden. The Pass is known for poor winter weather that can occasionally cause the road to be closed. International Airports are located in Kamloops BC, and Calgary Alberta. Driving time from Calgary is about 3.5-4.5 hours, and from Kamloops it's about the same. The trailhead for Mt Sir Donald is located about 2 km west of the pass. During the summer, you can drive the road to the campgrounds. Park in the stalls provided in front of the camping area. 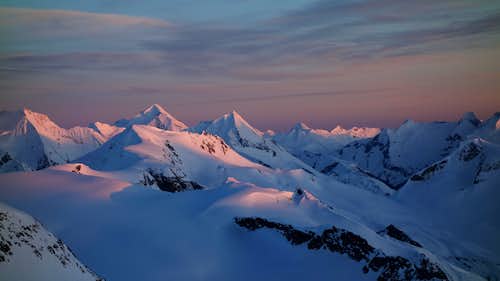 View from Sir Donald at Sunset

Southwest Face - PD+, 5.0 - A very dangerous route due to extreme rockfall danger. Several fatalities have occurred on attempts on this route. To the right of the Great Couloir.

Vaux Route - PD+, 5.0 - Another loose route up the southwest face. Bergshrund crossing may be difficult. This route zigzags a lot to keep on better rock. Still dangerous.

Feuz Chimney - AD, 5.3 - A large chimney system of the southwest face that avoids much of the rockfall near the Great Couloir. Reported as a nice climb.

The Great Couloir - AD, 4.0 - A dangerous couloir on the southwest face that is frequently avalanched in the winter, and swept by rockfall in the summer.

South Ridge - PD+, 5.2 - A seldon climbed ridgeline on mediocre rock with a large vertical step near the top.

Northwest Ridge - D-, 5.4 - A fabulous climb on a wonderfully exposed ridge with good rock (blocky quartzite). This is by far the most popular route on the mountain. Forever memorialized by the book "Fifty Classic Climbs in North America". Ascend from the Ulto - Sir Donald Col. Dow has a great description of the route.

West Face - D-, 5.4 - A good climb taking a direct line up the center of the west face. A large rockslide in 1983 altered the upper portion of the climb. Slightly loose still.

North Face - D+, 5.7 - A long 1,000 meter climb up the center of the large north face. Very seldom dry and in condition as a rock climb. A better mixed climb early in the season. Cold conditions are a must.

East Face - D+, 5.8 - A dangerous route up the 800 meter east face that is exposed to rockfall and serac avalanches.


Descent - The standard descent on the mountain involves first either downclimbing or rappelling the upper part of the NW Ridge (2nd crux labeled on the photo below) to the easier Class 2-3 part of the ridge. There are typically large slings to rappel from at 30 meter intervals on the upper ridge. Then scramble down class 2-3 on the upper ridge between the two cruxes until you locate the first of 10 bolted rappel anchors. With a single 60 meter rope you can make 10 rappels...the first 4 are on the ridge, with the 4th one being very tricky as it drops down the big overhang just to climbers right of the first crux. A swinging pendulum is very likely so consider a prussik backup and/or fireman belays. The 4th rappel brings you to the top of the large west facing slab, where you will find the bolts for the 5th rappel. Make an additional 6 rappels down the slab, trending slightly to climbers left on each one. After the final rappel you will reach lower angle terrain where you scramble down scree covered ledges or snow trending off to skiers left, to avoid the lower cliff. See the red line in the photo below. 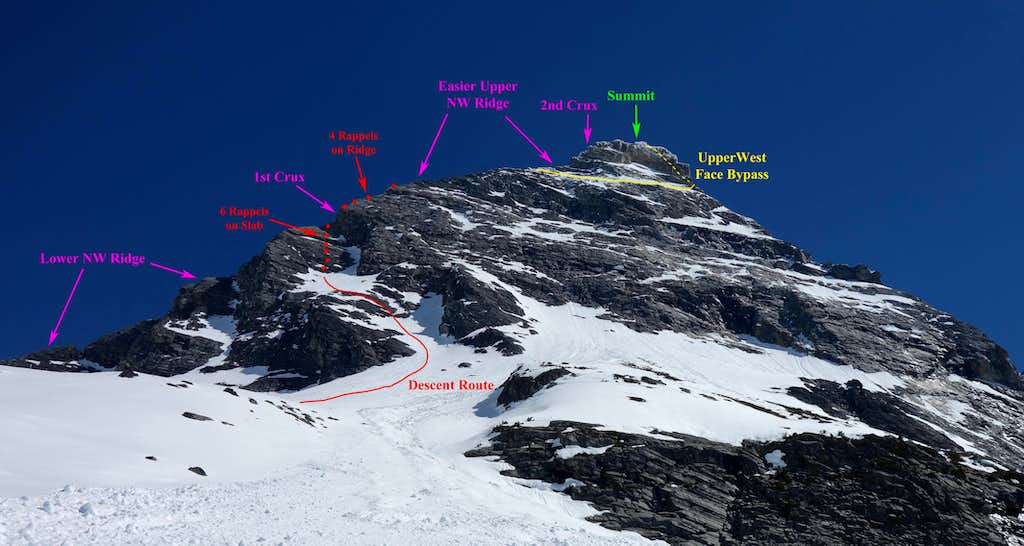 Canadian National Park Passes are required for all vehicles stopping in the park. These are either $10/day or about $80/year. Supposedly backcountry wilderness passes are also required for each individual, however I doubt you'll need them. Just park at the trailhead and go. The best place to camp is near the small pond at 7,600 feet just below the Uto/Sir Donald saddle. There is also a small bivy site roughly 200 feet above the saddle on the lower NW Ridge, and at the saddle itself however it's best to camp at the tarn so you don't have to climb back up to the col to get your gear! For paid camping there is a large campground near the trailhead. 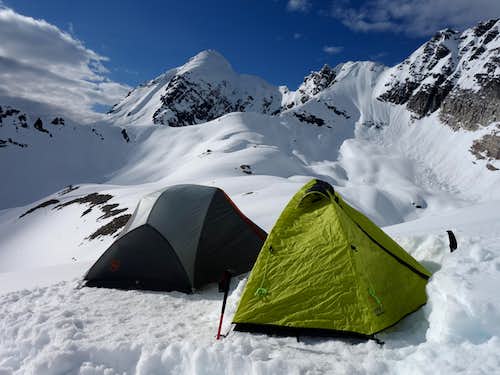 Conditions are best during the summer, but snow can fall at anytime of the year and any amount can make climbing significantly more difficult. Most ascents are done from late July to early September (the only time the ridges are not usually covered with snow and ice).

My Trip Report attempting the NE Ridge in May