A climber at high camp
The northwest ridge of Tocllaraju (6,032 m) is predominantly glacier travel with a difficult finish to gain the summit. It is one of several popular climbs from the Quebrada Ishinca basecamp and is often climbed by guided parties. It serves as a good introduction to (minimal) technical climbing at altitude, spectacular scenery, and is a classic moderate mountaineering expedition.

The route can be climbed in 3-4 days roundtrip from Huaraz for an acclimatized party. The climb is often preceded by climbing Urus Este and/or Ishinca and is sometimes paired with Ranrapalca. The route, and the peak, was first climbed in 1939 by Brecht and Schweizer from the north. For additional information see pages 150-151 of Brad Johnson’s Classic Climbs of the Cordillera Blanca.

While the climb may be moderate in difficulty, it is not without danger. In the past few years there have been multiple rescues due to crevasse falls. Be alert and prepared! 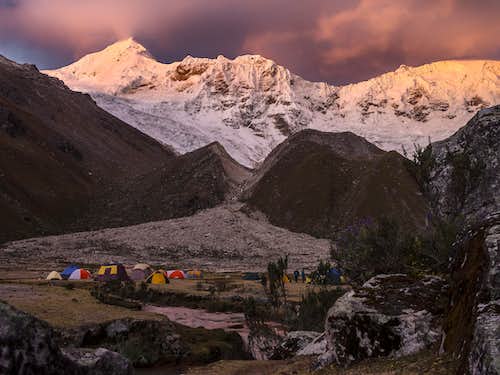 Ishinca basecamp
It's possible to approach the northeast face via either Quebrada Ishinca or Quebrada Akillpo, but in reality the Ishinca approach is used by almost all climbers. Q. Ishinca is one of the more visited valley’s in the Cordillera Blanca, with Nevados Urus and Ishinca, both popular walk-ups, accessed via the valley. Nevertheless, it is certainly spectacular.

From Huaraz, you may take either a taxi or a colectivo. Look for a colectivo going to the small village of Collon. From there you will need to follow roads towards Pashpa (approximately 2 km), an even smaller collection of houses. A taxi can take you all the way to Pashpa. In a soccer/football field just above the village, it is possible to arrange for an arriero and burros to transport loads to base camp. It is best to pre-arrange for an arriero to meet you at the field (ask the owner of your Hostel/Hotel), although it may be possible to find one on the spot. Many large commercial groups use this valley, so there are many arrieros and burros available.

From the field walk east towards the valley on the dirt road following a fence line. Once at the bottom of the hill (5-10 minutes), cross an irrigation channel and make your way up the hill. Follow the well-traveled path up and to the right passing a makeshift gate. Continue to follow the path southeast through open fields, eventually skirting along and then entering a grove of Quenea trees. Continue up a few switchbacks to gain a ridge before descending a short distance on the other side to enter Q. Ishinca. The trail continues straight up the left side of the valley, gradually gaining elevation. Eventually the stream that flows out of the valley will be adjacent to the trail, and you will follow this all the way to base camp. About half way to base camp, there is a small concrete building that serves as a Huascaran National Park checkpoint. No one really mans this station anymore though.

Typically, people establish a base camp in the field (“pampa”) at the end of the main valley (~3-5 hrs, 15 km from Pashpa, elevation 4,400 m). There is also a refugio available. The pampa is a large area that can easily accommodate dozens of tents. An outhouse is available and its use is encouraged to help keep the area clean. Be sure to filter or purify all water and protect all food as cows graze in the field. The base camp area offers beautiful views of the sun setting on the summit of Tocllaraju.

At the base camp, the valley splits. The left side heads toward Urus and Tocllaraju, while the right goes towards Ishinca and Ranrapalca. Leaving base camp, follow the stream up and left between the wall of the main valley (on your left) and the moraine (on your right). The path here meanders throw brush and is generally easy to follow as it is well traveled. Eventually, the path takes a left turn, following cairns through switchbacks up the steep valley wall. Nearing the top of the ridge, the approach trends to the right towards a rocky outcropping that sits in front of the mountain.

There are several options for high camp. The most sheltered location is tucked below this rocky outcrop (~3-4 hours from base camp). In the early season, this area may still be covered in snow but often dries out as the season progresses. Camping here adds a couple hundred extra meters to the ~1,000 m of elevation gain from the typical high camp, which sits on the glacier proper at ~5,000 m. Another alternative is the set up camp higher on the glacier (~ 5,300 m) below the west face. This will make the summit day a couple hours shorter. 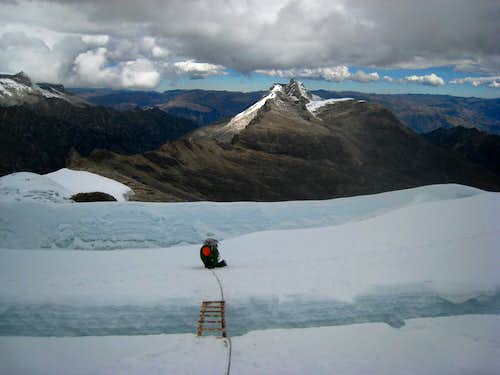 Crossing a ladder on lower glacier 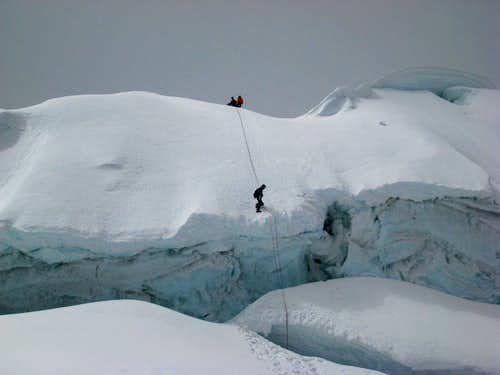 Rapping off the NW Ridge
From base camp, cross the lower glacier, which is fairly gentle but you will need to navigate and be aware of crevasses. Work up and left towards the end of the northwest ridge. The route to gain the ridge proper can change from year to year. Sometimes a more direct route can cut off some distance. Depending on your abilities and the current conditions, this may or may not require a pitch or two of belayed climbing. There are some large crevasses in the area that may require a jump, and in recent years have been large enough that guides have placed laddersa across them, otherwise the ascent isn't really possible!

Getting to the ridge almost always requires a short, but nearly vertical ice step across a large bergschrund. Once on the ridge, make your way up the slopes toward the summit pyramid. A series of two bergschrunds guard the final summit pyramid and can prove difficult to cross. These are not to be overlooked and have turned around many parties. They are the reason the route as given a D- rating, despite the rest of the climbing being PD or AD. It is best to get an early start as the rising sun softens the snow here, which can be unconsolidated and sugary. The ~55-degree slope can be ascended in two long pitches. The summit is typically reached in 4-7 hours from high camp, depending on the camp chosen. Also see the main page for Tocllaraju, as the author has a great route description for the NW ridge route there too. 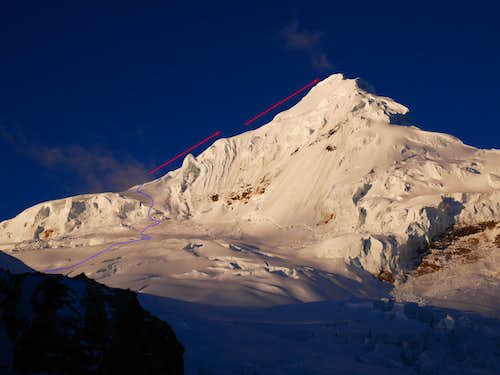 Descend the route on double 60 meter ropes. Two full raps will get you off the summit pyramid (pickets usually already in place) and at least 2-3 more rappels will be needed to reach the approach glacier below the ridge. 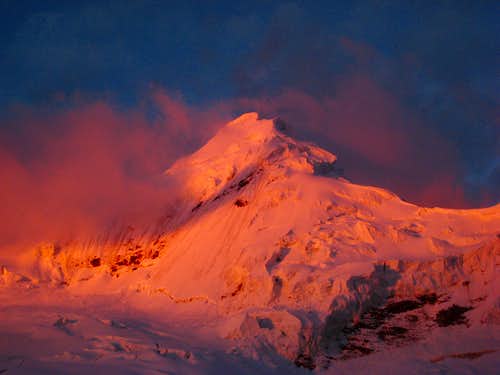 One technical axes and one mountaineering is fairly standard. Snow pickets or deadmen and standard glacier travel kit are also required.

The route can be climbed throughout the Cordillera Blanca’s climbing season (June-August). Heavy snow may make an easy slog into a laborious one. Check with the Casa de Guias in Huaraz for up-to-date conditions.

Tocllaraju lies within Parque National Huascaran. A park pass is required, and there are some loosely enforced restrictions (must be a member of a UIAA affiliated club) regarding access without hiring a local guide. See the Huaraz and/or Cordillera Blanca main pages.

Tourism and climbing is a huge part of the local economy. At the same time the Cordillera Blanca is a true gem. Please hold yourself and those around you to the highest standard of mountain ethics. Maintaining a positive relationship between climbers, locals, and park officials is critical to maintaining open access that benefits everyone.