This route seems to be a very popular local outing. The trail to the ridge is not a formal USFS trail but a well beaten in social trail. The first 2,000 feet of vertical are gained going pretty much straight up with no switchbacks.

Nearly all of the route is trail. There is only one 30 or 40 foot high Class 3 step. So if you are looking for a scrambling route, this is not it.

A mile from the light in the center of Hungry Horse, take the Martin City turn. Go straight (don't veer left, as that will take you back to the road you just left), staying on the road (it's only paved the first two miles, but after that is a good gravel surface) for 15.9 miles, at which point you will come upon a sign saying "Spotted Bear 39," and "Firefighter L.O. 4". Make a sharp left turn (there is no sign directing you to the trailhead)—more than 90 degrees—drive about half a mile (at most) until reaching the end of the road. You're at the trailhead. (You will know you are in the correct spot if you have just crossed a bridge over Hungry Horse Creek).  It's rather impressive: just after turning onto the final half mile you get your first view of Great Northern Mountain, looming almost a mile above you, and your first thought is "Wow, that's big!" followed immediately by something to the effect of, "That's a LOT of elevation gain over a short distance!" It's just my opinion, but Great Northern is a terrific mountain! Enjoy....

Vertical from parking spot - 4456 feet.  There is some up and down on the ridge, so total vertical climbed is probably about 5,000 feet.

Along to upper part of the ridge the track becomes somewhat braided with sometimes 3 or 4 trails leading across.  Follow Vernon's advice given below and always opt for the highest track on or as near the ridge crest as possible.

The rest is as Vernon wrote it (FS).

The trail takes off immediately north of Hungry Horse Creek—where you're parked if you drove to the end of the road (there is a parking area). Proceed as though going up the creek, and almost at once you'll see the trail taking off to the left. At times it's quite steep, but I would never describe it as anything but a good trail, and easy to follow. After a mile-and-a-half or so the trees thin out as you approach timberline, at which point you'll have more nice views of Great Northern's west face. The trail stays on a high ridge until reaching a point it encounters the north ridge of the mountain proper, at which time (after stopping to gaggle at the first views of the southern GNP peaks) you'll swing around, heading for the summit.

Standard/Northwest Ridge...
The single most important thing of this climb, and something to bear in mind at all times is simply this: stay at or very near the top of the ridge all the way to the summit! As you get further up the mountain the trail becomes less obvious, but the ridge top is always there to guide you. There will be a few fun-to-climb cliffs near the top, but nothing requiring any kind of gear, and it's interesting, but Great Northern has several summits, and even when you're relatively close the perspective is such as to make it confusing as to which is highest. But not to worry, when you get there there'll be no doubt!

Lastly, an important note that both the usually reliable "Hiking Montana," Falcon Guide book (Bill and Russ Schneider, authors), and the now out of print, but still in use "Climber's Guide to Montana" (Pat Caffrey), make no mention of this trail! Instead they have you take off just south (the other side of the bridge from the parking area) of Hungry Horse Creek and do a long, difficult bushwhack until gaining a ridge. This will certainly get you to where you wish to go, but is MUCH more difficult and time consuming. The page maintainer Bob Sihler took this route, and you can read his description of that struggle in his "overview" and "Dudley Bowl" route description. I've written to the authors of "Hiking Montana," and they've assured me the route will be corrected in the next edition, but until that time...ignore what they say, and take the trail north of the creek! 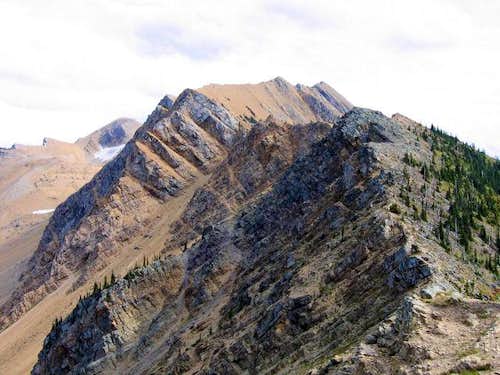 View up the ridge from near where it is attained 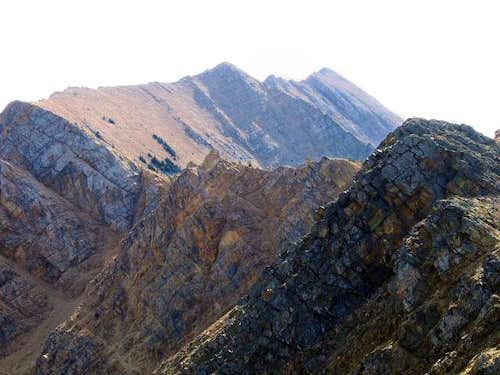 View up the ridge 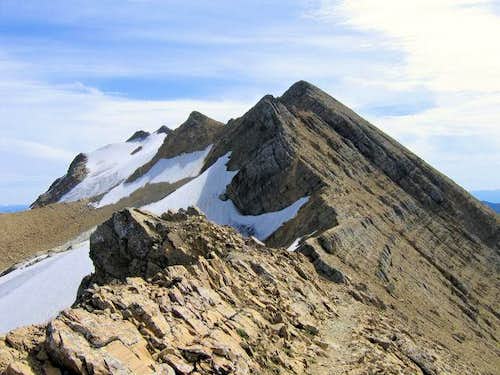 Higher on the ridge 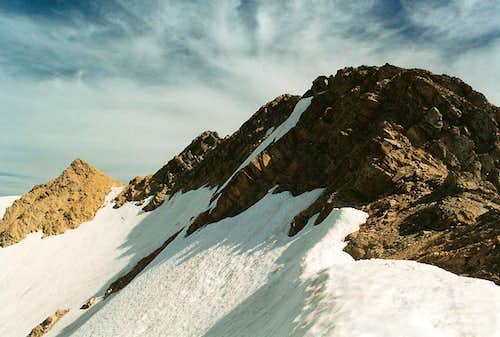 The single Class 3 step very near the summit 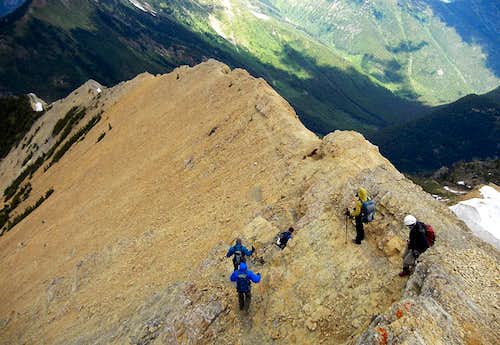 This would be a difficult climb early in the year (i.e., June, early July) you'd need all the snow and ice gear at your disposal. Later, just the usual—a good pair of boots are necessary for the cliffs.

The sign by the trail head turn actually says spotted bear 38, not 39. Drove a ways past it today.