On the rocks in the Saastal

On the rocks in the Saastal

Google terrain map, centered on the campground where we stayed.Click here for a larger map.
The Saastal in Switzerland is the valley that separates the Mischabel and Weissmies groups. Early summer 2014 Jan and I went there with big plans for some big ice faces. For acclimatization we had first spent a week in the Weisshorn group, further west, starting easy and finishing with the Brunegghorn North Face. Unfortunately, that would turn out to be the only steep ice we would climb. As we had found out on Brunegghorn, the relatively high temperatures meant that the faces were not in great shape, and as if that wasn't bad enough, the weather was far too unstable. 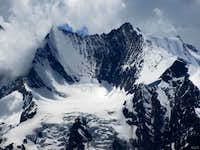 The summit on the left is the Lenzspitze (4294m). Its steep NE face is one of the routes we had hoped to climb.
Instead, we settled down on a campground in the valley, and spent our time on day trips. There are many developed climbing areas in the valley, with lots of bolted routes in all grades. One of the areas was right next to our campground! Though it was mostly dry, there were short rain showers almost every day. The rocks dried fast, but still took several hours to dry up enough to be able to climb again. And so a pattern emerged. Most days we would start climbing, anywhere between a few minutes and a few hours, until a shower put an end to that. All the forced rest that we got meant we had a very relaxed stay.

After a week, with just one day left, the weather finally improved. We had been waiting for that, hoping that we could have a go at Alpendürst, a 350 m high alpine rock climb on the southeast face of Jägihorn. We made plans for an early rise the next day. Not as in alpine start, but early enough to catch the first cable car from Saas Grund to Kreuzboden (alternatively, hiking to Kreuzboden would add more than 800 m to the ascent, making it a rather long day). The weather forecast proved to be right. It was mostly sunny and stayed dry. The route was fully bolted, and there were lots of belay stations. We quickly learned that we could easily skip half of them. We encountered no serious difficulties, and after that week of more waiting than climbing we thoroughly enjoyed ourselves. It was a fine farewell to the Saastal - but I'll be back!

Jägihorn summit panorama.
On the left is the Weissmies group, with Fletschhorn, Lagginhorn and Weissmiess. Further right, on the other side of the valley, is the Mischabel group.
Deep down below are the villages of Saas Fee and Saas Grund.

View On the rocks in the Saastal Image Gallery - 43 Images