On the south-east ridge of... 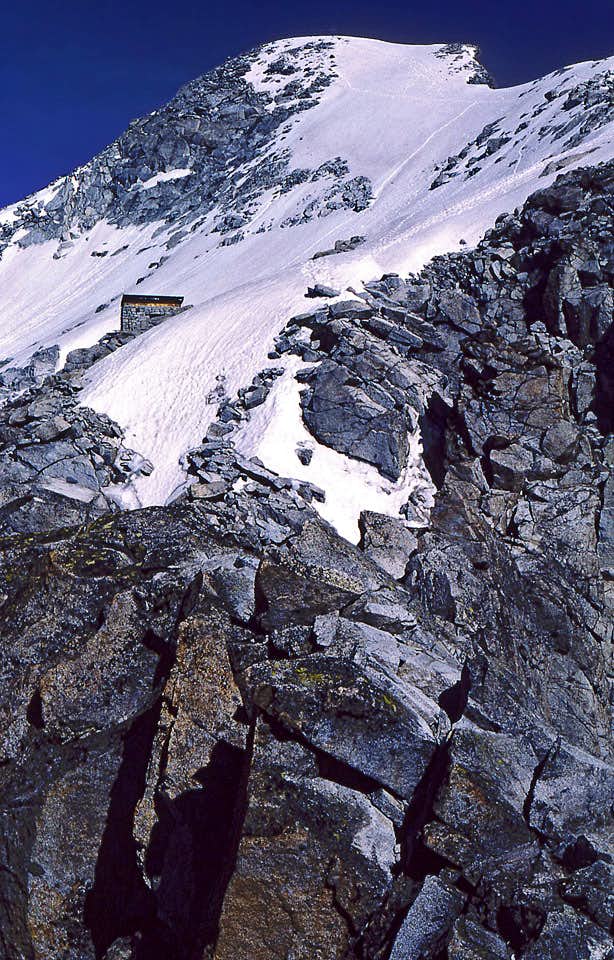 On the south-east ridge of Presanella. The bivouac is so near, but a nasty notch appears in front of us. We (with my wife and two children) have no ideas where the detour goes, until a guide with a client helps us. A short descent to the left (UIAA II), a narrow ledge and a steep snow "ladder" up to the ridge again. August, 1988.
« PREV NEXT »

Vid, I saw your reply to my "family photo" comment. When you shot THIS photo I' am pointing to, you probably missed the little rock gully by a few meters. It goes right left, first on rather smoothed rocks (a rope is essential here), then on good holds for about 10/12 meters, until you find a ledge running to the west and turning the central buttress dominating the large couloir which the first named gully is part of. Thereafter, an almost 180 degrees turning movement brings to the foot of another small gully, also with good holds. Technical level of this : about grade II-II+, UIAA. Of course, if the spot is snow covered, and worse ice covered, things are getting much more problematic : that's how the mountain was on sept. 29th 72, and we started down as you did, but fortunately found a large couloir on the southern side of the wide rock hump leading to the "hic" spot. And then ascended the final south flank of Presanella. We already had snow (fallen two weeks before) over the knees as we got half way on vedretta di Monte Nero, then we reached Passo di Monte Nero, which south side metallic ladder was about half height respect to today's situation (well looking at some pictures) : little vedrettina di Nardis was still existing !....A 5 AM move from the car park (where you start for Segantini), and a 6 PM arrival on the top : great pure sky.. Mte Rosa was seen !...and great pure cold : pictures had to be taken with gloves on. But everything had been prepared for a bivouac into little "Orobica" shelter. And the following morning the sea of clouds offered us the kind of sunrise you may imagine with Brenta Dolomites shadows emerging from it...That was my first summit : I could never again feel the same emotion...It's like the first love ! Sorry for the speech.

And, because your English is perfect - you could write about it a trip report and post it. Or, at least - just copy this description into your Summit Log of Presanella. This way, many more people will see it.

And - start thinking of your contributions to SummitPost. We need your experience, writing skills, perhaps you have fine pictures too. For a good start - just go to my 'Eastern Alps' page on SummitPost and decide where you can contribute most.


I would be happy to contribute with pictures but....as I still remain almost unconditionnaly attached to classical photo (more and more black & white...!), I should have to scan these views. And the result is very, very poor, I'm afraid, from a technical and esthetical point of view. I'll think it over, anyway.


You are right about the trip report : maybe shall I give more details...