According to many accounts, the Seward range is a two day backpacking trip where one would hike in to blueberry or ward brook lean-tos, set up camp, then hike up Seymour (or Seward, Donaldson and Emmons) before returning to camp on Day 1 and then hiking the rest of the range, pack up camp and walk back to the parking lot on day 2. Others did mention hiking all four mountains in one day but most of them taking way more then the 11 hours of sunlight we were going to get at the beginning of November.
For the past 2 or 3 days before our hike, the Adirondacks got hammered with rain and heavy winds, not to mention the 4 inches of snow they had the weekend before. The forecast called for 50 percent chance of rain in the afternoon, changing to snow in the early evening. My hiking partner (AJ) and I had a choice to make, do a shorter hike on Saturday and possibly avoid the rain then do an other hike on Sunday or do a long hike on Saturday, tough out the rain and cold, and head back home after the hike. On route from Ottawa to Tupper lake we discussed our options before finally deciding to attempt the Seward range in one massive day hike. Tupper lake was still under a heavy wind watch and possibility of rain so we booked a motel room for the night to make sure we would get a comfortable night sleep. Since we knew we would need all the energy possible to pull this hike off, we hit the pillow at 9.
At 3:30am the alarm sounded, we gathered our stuff and drove to Corey's road which took us to the Seward parking lot. After putting our boots and gaiters on, we signed the registration book and headed towards Blueberry lean-to under the dim light of our head lamps. At 4:45, the starting time of our hike, the stars were out and it looked like we were going to get a decent morning weather wise. The trail was mucky and, with our head lamps, the leaves made it hard to see where the mud was. The terrain did make it easier on the feet and the joints though considering that on most other trails we would already be boulder hoping by now.
It was about 6 o'clock when about 100 feet ahead use two eyes reflected light at us. We immediately saw that the animal was some kind of canine. A coyote? A wolf ? A fox? We knocked our poles together to make some noise and scare the animal away when a flash light turned on. Oops!  Blueberry lean-to was right beside us but we never saw it. We apologized to the group of four that was now wide awake while one of them retrieved the dog that had ran a fair ways down the trail, scared from our noise making. Once the path was cleared of furry friends, we moved on towards Ward Brook lean-to to finally arrive there at around 7 and meet a solo man (awake) who had walked there the night before. After a five minute conversation with the man and a 5 minute snack we kept going on the trail and turned right at the cairn which is about 200 feet from the lean-to.
The herb path easy to follow, we had no problem following it even with all the leaves on the ground. With the rain from the last few days, the herb path was a mucky as the main trail. It didn't take long before the ascent started and it did get fairly steep at times but with a steady pace we managed to be on top of the false summit of Seymour. Slightly disappointed, we walked an other 10 minutes to the true summit of Seymour which we hit at around 8:45. There are a couple of worthy view points just before the summit (view images). We stopped for a few summit picture and snack before making our way back down towards the main trail. On our way down, we met up with the man from Ward brook lean-to and an other solo man doing Seymour as a day hike. 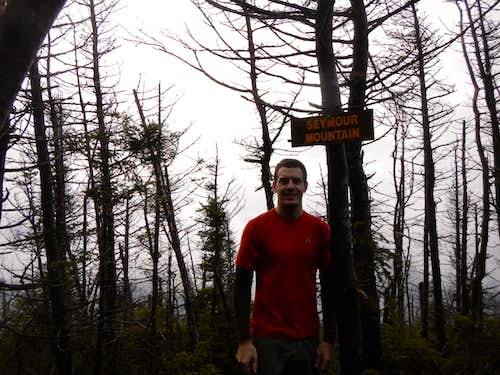 On the summit of Seymour
Once we got to Ward brook lean-to, we walk the approximately half mile to the cairn marking the start of the herb path up Seward. The cairn is easy to see (I saw it on the way in using my head lamp) and is located just after (if you are coming in from the parking lot) a well built vehicle bridge. After an other snack, we made our way onto the trail which again was easy to follow but very muddy (I'll stop mentioning the muddy...it was a constant battle and I could probably write a ten page script about it). Once we it the summit wall, we walked left until we could climb over it and walked the remaining 5 minutes worth of flat trail to the summit. At exactly noon, we found ourselves on top of the highest point of the range and of Franklin county, Seward mountain and just on queue, as the weather man predicted, the precipitations began in all its forms (rain one second and snow the next). Again, an energy boosting snack and a few shots were in order as we realized that the two biggest ascents of the day were behind us.
We kept going on the narrowing herb path (sometime not being wider the a foot) toward Donaldson which starts off with a descent of about 500 feet. The path then flattened out for a fair distance until it started to rise again. On our way up to Donaldson, we came up to a cairn which makes the herb path to Caulkin's brook (our way down to the car). There are a few side paths that turn off the main herb path but only one ends up on the summit. After going on all of the side paths and not seeing a sign like the one on Seymour and Seward, we decided not to lose to much time trying to find the sign and head straight toward Emmons since we had to come back over Donaldson to go down Caulkin's brook (we would look for the summit later).
At 2 o'clock, we reached the summit of Emmons and it to had a brand new sign just like the other ones before (except Donaldson which we hadn't found at that point). We met up with two nice people who told us that the summit of Donaldson didn't have a wood sign but rather just the old summit marked (yellow disc). At that point, the snow started coming down pretty had so we started to make our way back to Donaldson in search of the elusive yellow disc. We did end up finding it about 8 or 9 feet up a tree on a summit rock which would, on a clear day, have a view. It's also not very far from the cairn that mark the trail down to Caulkin's and, at the time I was there, someone had camped there not to long before and left the remains of a fire just below the summit marker. 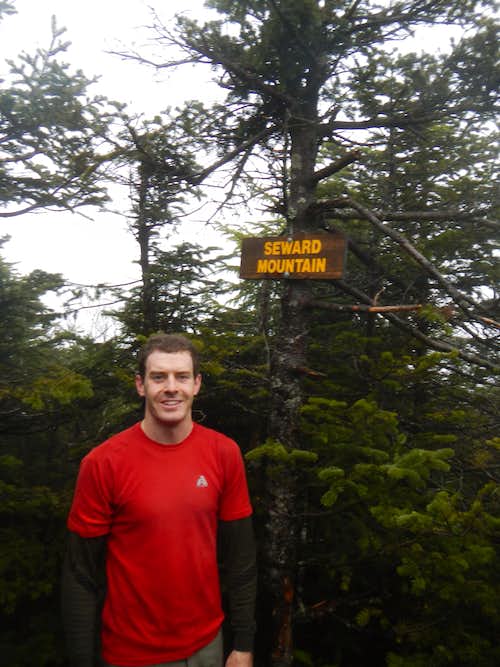 On the Summit of Seward 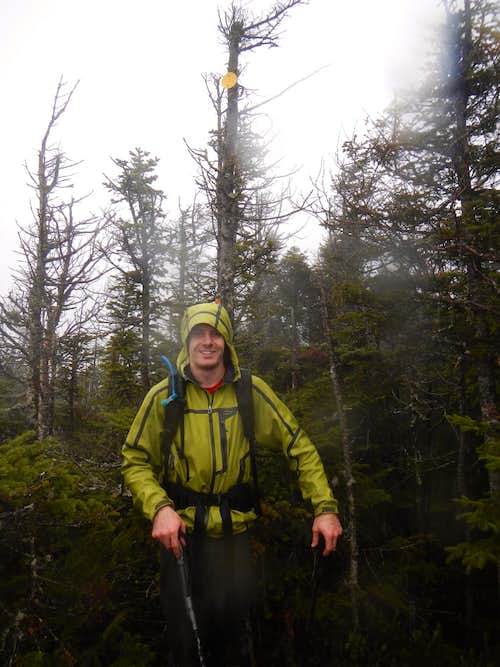 On the Summit of Donaldson 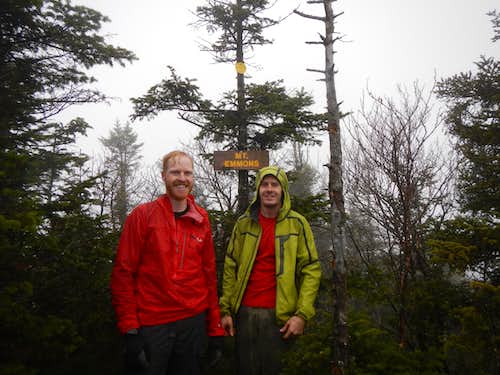 On Emmons summit with AJ
We wasted no time on the summit of Donaldson, only for a few photos and then headed back down via Caulkin's brook. The trail was dryer then the other ones we had been on before and I suggest going down Caulkin's brook instead of backtracking the ascent back over Seward, it's not as steep, dryer and actually shorter then going with the second option. The way down Caulkin's brook felt like it was lasting for ever. My body was starting to get sore and all I could think about was the dry, warm comfort of AJ's car. We finally reached the horse trail that meets up with the herb path and turned right at the cairn. The horse trail seems like is ascending for ever until we reached the gate to the private road and the sign pointing the way to the parking lot in 1.2 miles. We turned left at that sign and we were now on the same trail we had travelled on in the dark this morning. The last 1.2 miles did go by pretty fast since now weren't even trying to avoid/detouring the mud but rather just sinking ankle deep in it trying to take the shortest path to the car. First thing we knew, the registration box showed up. I headed to the box to sign use out while AJ head straight to the car to start warming it up. The car clock read 5:30 for a total of 12 hours and 45 minutes! What a day this was. I would suggest not trying this in winter since you have even less daylight and a section of Corey's road is closed adding 6 miles to your round trip. AJ and I are also quick hiker, if you can't keep a steady pace, do this as a backpacking trip. We headed to the Thirsty moose for some food before driving the remaining 2 and a half hours back home.