Sierra Nevada is already the twelfth Spanish National Park. The Congress of the deputies approved by a majority of all the groups, the declaration of this natural space Andalusian, who will arrange 86,000 hectares with the highest legal and environmental protection.  Sierra Nevada has now the resources necessary to start up the figures of integral protection that needs high mountainous massif more meridional of Europe, a space where the greater biodiversity of the continent is concentrated. The ski resort is outside the limits of the national park.

Sierra Nevada is the first space that is linked up to the network of national parks after the modification of the denominated Law of Parks and is already the representative in the country of the ecosystems of high Mediterranean mountains. It will be the most extensive of the existing ones and until now is the second of the Andalusians.
The law assures for this natural space the highest anticipated environmental protection in the legislation, as well as the care of its ecosystems and the maintenance of the valuable biodiversity that presents/displays the massif of Andalusia. Its declaration as National Park is the key for the maintenance of its natural values, landscaping and the special economy of its little settlers.

The range has 7 strategic access points (to choose depending the trailhead one would like to take). All of them are easily reachable with private car, and some of them are connected with the public transport network. Following a clockwise order starting from the main city of Granada, at the NW of the range, these access points are:

To the north of the range:

There are not interesting approaches from the west.

Pradollano Sky-Resort is reachable in 45 minutes from Granada over the ‘Carretera de la Sierra’ and then, the A-395. There are many buses departing from Granada’s bus station which cover the trip in one hour (‘Autobuses Bonal – Tel. nr: +34 958 46 50 22 Three rides each day).

Güejar-Sierra, reached over the road SE-53, which departs from Granada’s ‘Carretera de la Sierra’ and passes along the dams of Genil river, at the east of Granada city. There are bus companies that cover the trip (Viajes Liñan – Tel. nr: +34 958 263 725, at the city center).

La Ragua mountain road pass (1.993 m) is the only mountain pass that connects the north side of Sierra Nevada with the south side (Las Alpujarras). It is on the road A-337, which is connected to the north with the village of La Calahorra, that is reached over the highway A-92 from Granada. From the south, La Ragua is reached from the Alpujarran village of Laroles, on the local road nr. GR-431.

To travel around the southern small villages of Las Alpujarras, I advise a private car, since public transport will require many changes in connections with a lot of time-consume of our holidays. An alternative is to ask the services of any private small bus company that operates in the area. They could even arrange transfers from Granada or Málaga airports to any of these difficult to access villages (Alpujatour – Tel. nr: +34 958 766005). They will ask around 150,- euro for one way trip on a small bus with capacity for 6 persons from Málaga Airport to Trevélez. 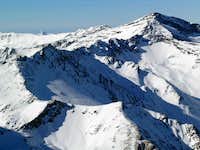 Granada is closer and better connected to the Sierra. Nevertheless, its airport is far from being international. Only flights from London, Liverpool and the mayor Spanish cities land there, so, unless you come from London or Liverpool, you will have to fly first to another Spanish city (Madrid, Barcelona, etc…) and then get to Granada by bus, train or with a domestic flight.

On the other hand, Málaga has an important international airport, with many direct flights with all the European cities but has connection problems with public transport. The option for the road trip from Málaga would, then, be or a private car or one of these bus companies mentioned above. In any case, this road trip would be over the N-340 direction Motril. Reaching the coastal village of Salobreña we will take the N-323/E-902 to Granada, which will become a highway (A-44/E-902). At the exit nr. 164 we will get the southern road of Las Alpujarras, direction Lanjarón and later Orjiva. At this village it comes the GR-421 to Pampaneira, and later the GR-441 to Bubión and Capileira. When we want to reach Trevélez, we will not have to take the GR-441 in Orjiva, but to continue further into Las Alpujarras and we will reach Pitres, Pórtugos and Trevélez. Further away than Trevélez, the GR-421 will reach the road to La Ragua mountain road pass.

Sierra Nevada occupies a considerable surface of the provinces of Granada and Almeria. With an extension of 169,239 hectares protected by the natural park, that includes 60 municipalities of the natural regions of the Marquesado of the Zenete, Valley of Lecrín, Sierra Nevada the West, the river basin of the Nacimiento River and, finally, the Alpujarra, Granada as much Almeria. The tip of the Mulhacén with its 3,481 meters is the highest summit of the Iberian Peninsula and it has, in addition, more than 20 summits that exceed the 3,000 meters, among them the Veleta and the Alcazaba.

Sierra Nevada has, in addition, a great number of endemic invertebrates, of which 15 are butterflies, like Plebicula golgus or the very well-known Parnasius Apollo nevadensis. There are 37 endemic coleopteros, like the Iberocardium loquinii and 90 exclusive species of aquatic insects. The birds form a well-represented very important community. It honors the real hawk, acentor eagle alpine and the red roquero. The queen of the Mountain range is the wild goat although also other mammals of less size like topillo exist nival.

Sierra Nevada is the last great natural wall of the south of Europe. It is raised majestic drawing up a rustic line with watched to the sea from 1,000 to 3,481 meters of altitude, in which they hide the most varied landscapes. From Güéjar Mountain range to Capileira, crossing the integral of the mountain range, goes of a Mediterranean zone eminently, green and water, (next to the course of the Genil river) to spaces marked by the frost and wind drifts.

When ascending to the 2,500 meters, the mountain range changes, the vegetation becomes alpine, small, small lagoons take step to the highest point of the North slope, the passage of the fly lagoon to the Alcazaba and, from there, the contemplation of all the South slope, the Alpujarra, the landscape of the tundra, 3,000 meters of altitude and the high summits.

Watching bellow on a smooth mountain landscape, eroded. The Green lagoons of Seco River, Waters, the Boiler, loaded borreguiles of green in summer and tons of snow in winter. From it is possible there to be lowered to the sea. Again the landscapes mark by the altitude and the elasticity effects. The national park forms high summits, from Granada to Almeria, of the Marquesado to the Alpujarra, the last natural border.

Nevasport A very informative page over mountaineering in Sierra Nevada, with huts'information, trips suggestions, forums, and many more. In Spanish.

Sky Resort The official (and commercial) site of the Sky resort of Pradollano, NW of the Sierra. In Spanish.

It is now possible to fly from London Gatwick, Stanstead and Liverpool direct to Granada. From the city there is 1 bus daily (leaves at 9am, returns at 5pm)to Pradonollo (the ski resort) and Hoyo de la Mora (a little further up the mountain road) during the summer season. This is the only public transport avaliable on this side of the park. From Hoyo de la Mora it is possible to catch the national park shuttle bus up to Positiones de Veleta which halves the walking time to the summit to just 1 hour. The view from the top is sensational

Sierra Nevada cable car gets another no from the Junta

I'm studying abroad in Granada for the semester (September - mid-December 2013), and am hoping to do some backpacking on weekends in the Sierra Nevada ranges. I'm down for anything really! Send me a message if you're interested!

Hello jwiese, we are planning to climb Mulhacen, the highest mountain of the range (and the highest of continnental Spain). 3.482 m. We will be climbing it in two days, sleeping in the hut of Poqueira (2.500 m). However, this is an organized commercial ascent, runned by my company of mountaineering and outdoor activities www.jonsanz.com (site now completely in Spanish, but we are guiding in English, Spanish, Dutch,...). This costs € 145,- for the two days climb, but includes the night in the hut with the food (dinner and breakfast), and also includes the insurance and the use of crampons and ice axe. The ascent will take place on december, 7th and 8th.If you want to come with us, take a look to our site and, if you want, contact us for reservation. Jon Sanz Mountain Guide www.jonsanz.com +34 645005081