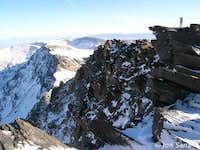 Mulhacén, with 3.482 meters, is the highest mountain of the Iberian Peninsula and, therefore, of Spanish mainland. In fact Mulhacén is 78 meters than the highest mountain of the Pyreneeës, the Aneto. The proximity to the Mediterranean Sea makes the situation of this mountain (and of the whole range) very special. On a clear day one can see as far as the Rif mountains, in Morocco and half Andalusie.

The mountain offers two different approaches for all its visitors. To the south, its huge southern slope has the shape of a convexe half pipe that rises slowly and progressively till the summit. To the north there is an steep and lightly concave face of rock (and snow and ice in the winter). Mulhacén gives the chance to climb it to all kind of mountaineers: the walkers can choose to hike the mountain up over the friendly south slope (called 'loma' in Spanish) and the experienced climbers can choose one of the difficult lines of its north iced face to reach the geodesic vertix at the very top.

This all makes Mulhacén a very attractive mountain: high, alpine in winter, easy to climb for even the average walker (specially in the summer), challenging for the experienced alpinist, and in the heart of a mountanious range, Sierra Nevada, a National Park full of beauty and experiences. Next to this, its climb can be combined with excellent walks to nearby mountains and valles. 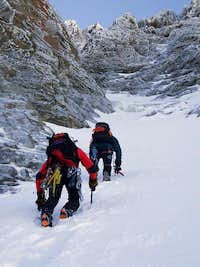 Climbing on the North Colouir

There are several routes on Mulhacén:

- Over the south slope: This is the shortest route to the top

- Over the west slope: this route is known as the 'normal' and it involves a long approach over the south slope, walking next to the ravine of the Poqueira river and a finally ascending over the steeper west slope.

- Over the 'Loma del Resuello': this involves an approach till the 'Cañada de las Siete Lagunas' -starting from the village of Trevélez- and a push up to the top over the eastern end of the wide south slope (known as 'Loma del Resuello')

- Over the east face: directly from the 'Cañada de las Siete Lagunas' the top can be reached climbing on the SE slopes or, steeper over the real east face (called 'Raspa del Tanto').

- Over the north face: here there are many lines starting from the 'Hoya de la Mosca'. The most known is the 'Canuto Central', a 300 line of snow, ice and rock, which has three different exit lines near the top.

The closest big city to the mountain is Granada. It has a small international airport. Nevertheless, the biggest international airport in the area is the one of Málaga, which receives many flights a day from all over Europe. Málaga is about 1 hour and 45 minutes away by road from Granada.

From both airports there are regular bus services which connect them to the cities. The airport of Granada is, then, connected to the city of Granada.
When landing in Málaga, there is a bus from the airport (of Málaga) to the city center (Málaga) and at this place (the central bus station of Málaga) travellers can continue with another bus which drives directly to Granada city.

Alsa company of busses has a direct service of shuttle-bus which connects Málaga airport with Granada center (bus station). From Granada this service goes directly to the airport of Málaga too.

Once in Granada there are many busses which ride to the ski-station of Pradollano (one of the 'entrances' of Sierra Nevada range), or to the Alpujarras, the region at the southern slopes of the 'sierra', where are many of the villages from where the routes into the mountain start. The most useful final destinations in the Alpujarras region when wanting to climb Mulhacén are Capileira or Trevélez, both idillic mountain villages which are a good start for the mountain. 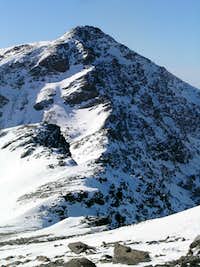 Mulhacén is in the heart of a National Park. Camping is forbiden.

Nevertheless, there are two possibilities to pitch a tent in the mountain:

1. for bivouac: visitors are allowed to set a tent one hour before sunset to pass the night, but this tent has to be taken away in the morning (with the limit of one hour after sunrise).

2. standing during the day: visitor who want to leave a 'permanent' tent in the park have to ask an special permission to the park authorities. This permissión allows a tent to stand on a place with some limitations.

Next to that, there is a poor network of huts in the park. Mulhacén has a base guarded hut that is used as base for the mountain. It's the Refugio de Poqueira, at an altitude of 2.500 meters. Next to that hut there are two other non-guarded huts in the surrondings:

- Villavientos (3.100 m), at the southern slopes of Loma Pelada, a neigthbour mountian of Mulhacén, and very close to the 'Hoya de la Caldera' and the west face