Peak 10745 is an unnamed summit located south of Greys Peak 10,674', and north of Hole-in-the-Mountain Peak 11,306' in northeastern Nevada in the East Humboldt Range. Like Greys Peak, this peak can easily be hiked in a day from Angel Lake. It is home to Big Horn Sheep and Mountain Goats who frequent its higher slopes, and seem to love hanging out at the summits themselves, as I learned when I first climbed here. 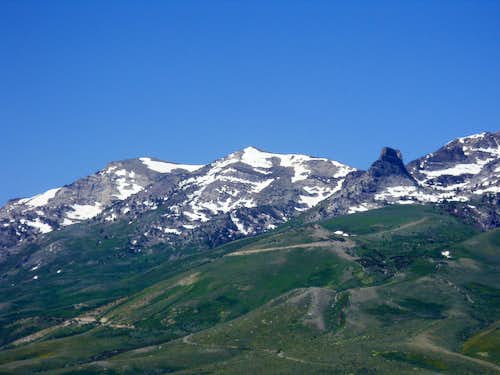 Located just west of Wells, Nevada, it is very accessible. The trailhead is 12 miles off Interstate-80 via a paved road. It is best to combine Peak 10745 with Greys Peak, since they share a ridge.

The primary route to the summit is about 3 ¾ miles from the trailhead, and requires about 2900’ of elevation gain. It is best hiked between June and October, although the middle of summer (late July/August/Labor Day) is not recommended due to the oppressive heat and dry desert climate. When I hiked on July 2nd, 2010, there was still snow on the east face (the primary climbing route).  After four years of drought (2012-2015) it is likely snow free by June.  It is possible to climb Peak 10745 from the west side from Starr Valley Road, but not recommended as the routes are much longer, and start on minor National Forest roads, and the east side is far more scenic anyway.

It is also feasible to do a tour of all of the major peaks in the East Humboldt Range from Angel Lake. This requires a start from Angel Lake over to Grey’s Peak, then heading over to Peak 10745, and then following the ridge for about 3 ½ miles to Hole in the Mountain Peak. This is possible in a long day hike (14 miles+) with an elevation gain to all three peaks of about 4500’, and then 1300’ more elevation gain along the ridge on the way back to Angel Lake. I recommend you camp at Angel Lake (see External Links for camping information) or stay in a hotel in Wells if you are to attempt such a feat. 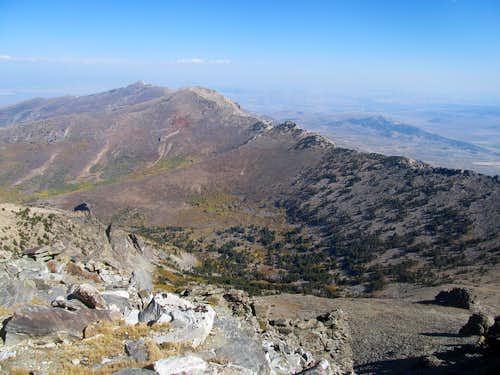 From the parking lot, follow the road to the left of the lake, which turns into a rustic trail. The trail goes up, very steeply, towards the ridge. Basically, it isn't a trail anymore, but just a gully. This heads up and over a rocky ridge, eventually climbing over 2,000 feet to the summit ridge of Greys Peak in about 1 1/4 miles. Due to steepness, it usually takes between 45 minutes to an hour to climb the first 1 1/4 miles. Cairns mark some of the way, but don't rely on them.

Once at the top of the ridge you can make a quick jaunt up to Grey's Peak or just head left (south) to the obvious ridge towards Peak 10745.

The ridge is 2.5 miles, but is pretty straightforward, so it doesn't seem that long. On the way, you have to descend to the saddle between Greys Peak and Peak 10745 which drops precipitously to about 9950'. 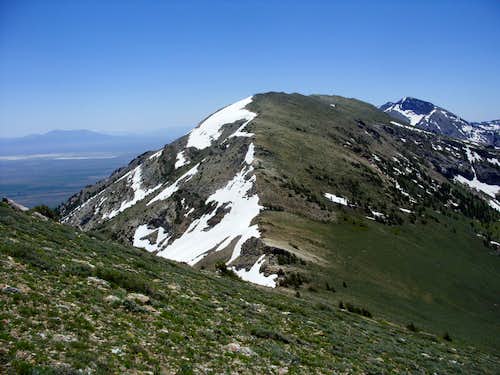 From the saddle, it is about 1.5 miles up to the summit of Peak 10745. You climb initially up to Point 10635, then a slight descent, then a slight ascent to Point 10569, then a slight descent. Then you reach the main summits. First there is Point 10743, the sister summit of Peak 10745. Go to the southern edge of the ridge to the true summit. Descend the way you came up. Do not try to descend at the saddle because it leads you into brush, or way down the Angel Lake Road, which you have to walk up again.

If you combine Grey's Peak and Peak 10745, the elevation gain is 3200' on the ascent to both (add about 500' on the way back up towards Greys Peak in order to descend the way you came). The total hiking distance is about 7 1/2 miles, and should take between 4-5 hours for the experienced hiker. There is a lot of scrambling required, but mostly class 2, with some easy class 3 moves along the way; mostly in the first mile of the climb from Angel Lake.