The Pecos Wilderness is a prime example of the environmental diversity that New Mexico has to offer – consisting of dramatic crumbling talus slopes, towering peaks, hidden shimmering lakes, abundant wildlife, and wildflower meadows best caught in July and August.

This is the second largest wilderness in the state of New Mexico, with Gila Wilderness being the largest. The southern Sangre de Cristo Mountains within the Pecos Wilderness are the southern end of the great Rocky Mountain chain whose northern end stretches to Alaska. The most dominant tree is the Engelmann Spruce but the area also consists of corkbark fir, ponderosa pine, Douglas fir, white fir, limber pine, bristlecone pine, (the Pecos Wilderness is the southern limit of the long-lived bristlecone pine),and aspen pack the forest. Equally diverse is the wildlife, including elk, deer, bear, bighorn sheep and turkeys.To the west, steep walled canyons drain toward the Rio Grande. In contrast, to the east lies the relatively gentle upper Pecos River Valley, an area of broad flat mesas and grassy meadows. Steep walled canyons, long, broad mesa tops, heavily forested slopes, and rugged ridges with peaks above timberline characterize the Santa Fe Mountains of the Pecos Wilderness.

There are 15 lakes, and eight major streams that run for over 150 miles in total. Some of which sustains the native Rio Grande Cutthroat Trout.The Rio Grande cutthroat trout has been reduced to approximately 176 populations found in tiny headwater streams, which are highly vulnerable to decimation by flood, drought or other environmental changes, and occupy less than 10% of the subspecies' historic range. Although it is legal to fish for the Rio Grande Cutthroat, anglers are generally asked to practice a catch and release program for this fish.

For hundreds of years the Pecos Wilderness country was a resource for many Native American tribes. The diversity of this wild, untamed area allowed for the Native peoples to coexist peacefully with nature. To the west of the Pecos high country lived the Tewa and Keresan Puebloan peoples; to the north nomadic mountain peoples such as the Utes lived; to the East Plains Indians managed to occasionally skirt the edges of the divers area; to the south the Towa Indians inhabited the pueblo the Spaniards called Pecos. The literal translation for Pecos comes from a Native American word meaning “place where there is water.” The pueblo of Pecos was the trade path between the farmers of the Rio Grande and the tribes that hunted the plains for buffalo. However by the late 1700s most of the residents of the Pecos Pueblo had died as a result of drought, disease, and Comanche Raids.

Lured by the legends of great cities heavy with gold, Francisco Vasquez de Coronado embarked on his vision quest obtaining this legendary wealth. In 1540 he lead an army of 1,200 men into the country north of Mexico. Instead of discovering cities of gold he found the pueblo of Pecos where the people greeted him with music and gifts. In 1541 Coronado was lead to believe that to the east lay a land of great riches. Coronado traveled all the way to Kansas looking for this mysterious city and was disappointed to only find a few remote villages. Coronado returned to Pecos Pueblo and confronted the Indian guide that had told him the story of the gold laden cities, the guide ultimately confessed that he had lied to him, and Coronado quickly had him killed. The conquests soon came to an end as the search for cities of gold continued elsewhere. Filled with despair Coronado and his armies left the area and headed back to Mexico empty handed. It was nearly half a century later when the Spaniards came to New Mexico to stay. The area was slowly invaded by the want for precious metals, and in particular silver. It was soon discovered that the geologic qualities for producing silver were quit slim in the Pecos Pueblo areas. The Spaniards soon realized that there were no cities of gold or silver stashes waiting to be found, however they did find that the land could be farmed and the Native peoples could be converted. Pecos by now was the richest and most powerful pueblo at this time and a friar quickly was sent to the pueblo to start the colonization of the Natives. The new religion was not well received and resulted in the Pueblo revolt of 1680. Scattered pueblos formed a united power and quickly took over the Pueblo of Pecos, killing the priest and destroying the massive adobe church that had been built in the Pueblo. A decade later, led by Diego De Vargas, the Spaniards came back to the lost territories. The dust had settled by the time Vargas came to the Pecos Pueblo and the opinions of the Indians had shifted and they welcomed him back into the Pueblo, and even supplied him with additional warriors to take back the nearby Pueblo of Santa Fe. Over time a Spanish – Pueblo community developed with both sides trading and acting as allies. By the late 1700’s the population of Pecos was less then 300 due to disease, Comanche raids, and migration. Pueblo divisions between those loyal to the Church and the new ways of the Spanish against those who resisted change and hung onto the old ways contributed to the decline of this powerful city. Functions of the trading center of Pecos quickly faded as colonists moved to the east. When the Santa Fe Trail started to trickle by the Pueblo community in 1821 the city had already faded to a ghost town.

The general assumption is that there are three subgroups, the Santa Fe Baldy area, Truchas Peak area, and the Pecos area. All three groups, however, are still very large and contain other mountains that are not listed in SP yet. For practical reasons though we will subdivide the area into seperate groups based upon the 7.5 Minute USGS Topographic Map Index. 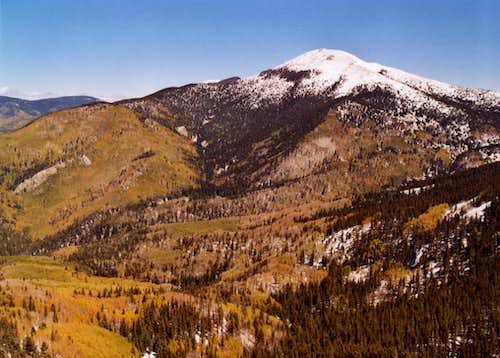 The Pecos Wilderness is located one hour north of Albuquerque, New Mexico. It can be accessed through several towns; Espanola,Pecos, and Santa Fe. There are twenty-one trailheads listed by the Forest Sevice that grant access to the Pecos WIlderness, I have listed the main trailheads in each area Ranger District

Aspen basin Trailhead - Elevation: 10,248. - To get here from Santa Fe, take HWY 285 N/St. Francis Dr. toward the center of town. As you near downtown, St. Francis intersects Paseo de Peralta. Don't turn here, but continue on a few blocks until St. Francis intersects Paseo de Peralta a second time (P. Peralta makes a loop). Turn right on Paseo de Peralta and follow it for a couple of blocks. Turn left on Bishop Lodge Road, which is immediately after the large, pink, moorish looking church. Turn right on to Artist Road/Hyde Park Road, which winds its way up the mountain and then takes you to the base of Santa Fe Ski Area. As you enter the parking area for the ski area, stay left where the road forks around a grove of trees. The trailhead is on your left about 100 yards past the fork in the road, near a small grey building housing the restrooms.

Rio Medio Trail - Elevation: 8,731. - This trailhead is situated next to three other trailheads which all share the Borrego Mesa Campground, and can be accessed useing the same directions. These trailheads all need to be used with caution due to continued reports of vandalism to vehicles, they are as follows; Rio Quemado, Rio Molina and Borrego. To access these trailheads follow 84/285 north from Santa Fe. Head North East on 503 which is located shortly after the town of Pojuaque. Turn East (right) on Forest Road 306 following it to Forest Road 435, which ends at the campground.

Trampas Lakes - Elevation: 8,951 - To access the trailhead head north on 84/285 from Santa Fe. Head east on State Highway 76 towards Trampas, passing through Chimayo and Truchas. Head East on Forest Road 207. Forest Road 207 is an 8 mile dirt road that is maintained and dead ends at the trailhead.

A wilderness area is defined as "an area where the earth and its community of life are untrammeled by man, where man himself is a visitor who does not remain". However, wilderness visitors need to remember they are entering a rugged, natural landscape and must assume full responsibility for their own safety and well being.
Terrain may be rough and steep, and travel much more difficult then expected. Often trails are poorly marked and hard to follow especially after rain fall or during the winter months. Always carry plenty of food and water, extra clothing, and a map and compass. Some of the primary things to look out for are;

Pecos Wilderness is jointly managed by both the Carson and Santa Fe Forest Service, but lays within the Española Ranger District and also the Pecos/Las Vegas Ranger District.