Chimayosos Peak is the eastern outlier of the Truchas Group, the grand massif at the center of New Mexico's Pecos Wilderness, and arguably the state's most spectacular set of alpine peaks. Although its altitude falls 150 feet short of the 13,000' mark, consigning it to black sheep status amongst its immediate neighbors, its location is perfectly placed for enormous views of the Truchas and the entire Pecos. Its 861 feet of prominence place it as the 7th highest summit in the Land of Enchantment.

A little south of Chimayosos are a stream and a minor summit named Rito del Padre and Cerrito del Padre. One story has it that these features are named for a Spanish priest who found a rich gold mine in the area. This padre conscripted men from Chimayo ("Chimayosos") to work the mine. This mine is probably legendary and its location is certainly unknown, though some people say it is buried beneath a rockslide, waiting to be found again.

A more plausible story holds that Rito del Padre was named for a priest who journeyed to the high cfountry in summer to perform outdoor masses for the local sheepherders. Given the peak's easy ascent routes, it's a safe assumption that it has been climbed for centuries by the Spanish and by Puebloans and other native peoples before them.

Chimayosos sits right astride the Picuris-Pecos Fault, a major geologic displacement that defines much of the topography of the Pecos Wilderness. West of the fault one finds Precambrian granites, schist and quartzite which comprise all the highest summits of the Pecos: Lake Peak, Santa Fe Baldy, the Pecos Baldies, the Truchas and the cliffy west side of the West Fork Santa Barbara. Particularly notable in the Truchas area is the Ortega Quartzite, and beautiful and massive whitish layer of accumulated beach sediments hardened by metamorphosis. This formation measures over 3,000 feet thick, and also forms impressive scenery in the Tusas Mountains and Brazos Cliffs west of the Rio Grande Valley.

East of the fault, the rocks change to gray and brown Pennsylvanian sedimentary strata of limestone, sandstone and shale. The scenery undergoes a corresponding shift from the craggy hard-rock peaks of the Truchas to the more subdued and rounded, but still very high topography of the eastern Santa Barbara Divide. Sharp-eyed hikers may notice occasional small invertebrate fossils in these layers. The fault itself is evident high on the east ridge of Chimayosos where the observant will perceive the shift in rocks, but it is not as dramatic here as to the south at Pecos Baldy Lake.

Glacial-carved features are obvious throughout the Truchas massif and in the steep north-facing cirques of the forks of the Santa Barbara. To the south the valleys display gentler erosion of streams acting on soft layers, until one comes to the lower canyons of the Pecos and Mora rivers. Lower down, these streams carved below the Pennsylvanian sedimentary rocks, through the Great Unconformity into the harder metamorphics beneath, and their lower gorges are thus much steeper and lined with cliffs.

Trail Guide to the Geology of the Upper Pecos, Scenic Trips to the Geologic Past No. 6. Patrick K. Sutherland and Arthur Montgomery. New Mexico Bureau of Mines and Mineral Resources, 1989.

At 223,667 acres, the Pecos is New Mexico's second-largest designated wilderness area after the Gila. It was first designated as part of the original 1964 Wilderness Act, and later expanded by an additional 55,000 acres in 1980. The wilderness encompasses the southernmost above-timberline peaks of the Rockies and contains many of New Mexico's true alpine summits, plus vast acreage of forest, numerous lakes, waterfalls, cascades and miles of streams. The Skyline Trail crosses Chimayosos' south slopes.
Chimayosos is one of the more remote summits in the Pecos. It can be approached from all directions, but all approaches are long. Most hikers will require a night out to get here, and three days or more will be most fun, providing opportunities to climb the Truchas and other nearby summits as well.

South: Most people approaching from the south will come from Jack's Creek Trailhead, and pass by Pecos Baldy Lake, Trailriders' Wall and the Truchas Peaks on the way. One-way distance is approximately 13 miles, and good camping is available at Pecos Baldy or Truchas Lakes. Other varitoins on the southern approach are certainly possible, but will involve more mileage in dense timber.

West: Coming at Chimayosos from the west via the Rio Quemado basin would make a splendid approach, but it comes with issues. The Borrego Mesa trailhead on public land has a bad reputation regarding vehicle safety, while the trailhead east of the village of Truchas requires permission from the land grant owners. Online sources list the contact number for the Truchas Land Grant as 505-351-4250, though I have not personally used it. This approach would take you over a rugged but very scenic pass between North and Medio Truchas Peaks.

North: The West Fork of the Rio Santa Barbara is one of New Mexico's finest alpine valleys, and offers an approach to Chimayosos of approximately 13 miles. Camping can be had in the lower valley or the upper basin, or one could continue on to the Truchas Lakes. Loop backpack options are available via the Middle or East Forks of the Santa Barbara.

East: The eastern approach via Angostura Trailhead, Serpent Lake and the Skyline Trail traverses the vast alpine tundra of the Santa Barbara Divide. Views are constant and amazing on this route, but lightning danger is significant and one must drop into the nearby basins to find campsites with water. A vehicle left at Santa Barbara campground would open up the possibility of a splendid 3-4 day backpack with a reasonable shuttle. 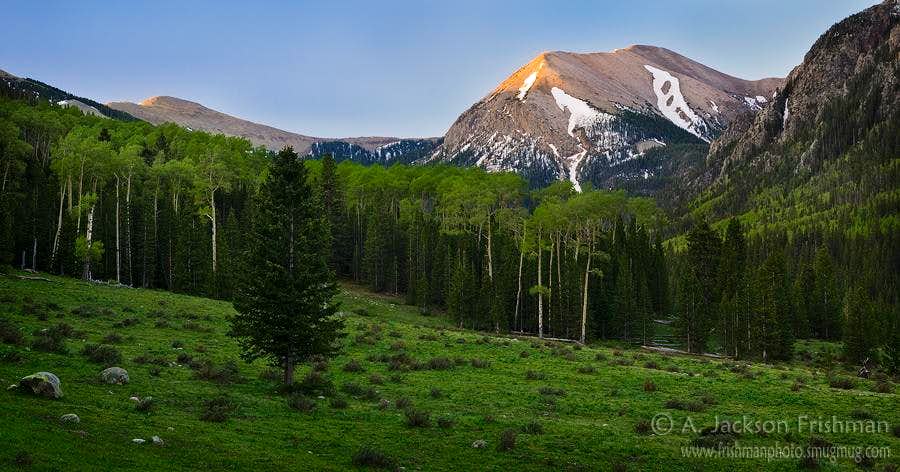