Peričnik waterfall is one of the main attractions of Julian Alps. There are higher and more mighty waterfalls in Alps, but Peričnik is cute, very picturesque, when its water fills in a small pond below, you can admire its turquoise colour, and the waterfall also has an attractive advantage that you can walk behind the water curtain. As it is easily and quickly accessible, thousands of tourists are visiting it in all seasons of a year. The access is free of charge and we can only hope that it stays so. 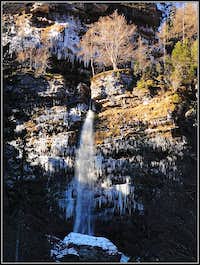 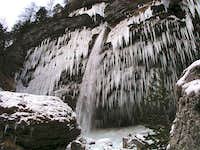 Winter scene
Already from the road into Vrata valley, just past the mountain hut, you can see the Lower Peričnik. But there are two waterfalls. The lower one has an altitude of 52 meters, immediately above it there is also a smaller Upper Peričnik, which is 16 meters high. Many thousands of years ago, when water still did not erode the wall till today's extent, that was only one waterfall. They have their source a few hundred meters above, in the ravine, called Peričnikove meli, from where the creek flows past the Višek meadows and then down to the waterfall. The two waterfalls are falling over broad, overhanging conglomerate walls. Below the walls you can see many huge boulders which once fell down the walls (last such big rockfall was in 1907). The path is nicely winding through that chaos and ultimately also behind the water curtain.

Very spectacular is the waterfall in winter. After longer cold periods the whole wall converts into a scenery with thousands of big icicles, the whole composition looks like a big white organ. In very good conditions the waterfall even becomes suitable for ice climbing.

From a distance, the two waterfalls are best seen from the slopes on the other, just opposite side of Vrata valley. 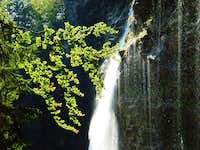 JFS - Peričnik
Peričnik waterfall has its origin in the glacial deformation of Vrata valley. During the last ice age (Wurm era), the big glacier, flowing from below Triglav towards the valley of Sava, deepened and widened the valley, which still today shows its characteristic U-shape. This process cut the boddom part of a side valley, where Peričnik creek flows, making it a hanging valley. Also the more than 100 meters high layers of conglomerate, over which today the water falls, have a glacial origin. We can see these thick layers also along the marked path through Vrata valley, in the nearby Galerije (Galleries). It is interesting, that even today Peričnik waterfall is changing. The water bed is changing its course, we can see evidence for that in fossile water beds and also through stories, told by local people and even on old photos. Many decades ago the waterfall was a few meters away, and doday in very high waters, two streams are formed - one by the historical bed, the other one by the current bed.

From behind the curtain

The Upper Peričnik
As said, Peričnik waterfall is situated on the left bank of Vrata valley, which is accessible from Mojstrana by a good public road (no fee). We can park near Koča (mountain hut) pri Peričniku, where a good, marked trail starts towards the walls. It is only a short ascent of some 15 minutes, and we already reach below the Lower Peričnik. Most people do a round tour behind the water curtain. The path is easy, but obviously wet and on a few places also slippery, so good shoeware is recommended.

Those who want to see the big waterfall from a different perspective, and visit also the Upper Peričnik, can take the marked path, which ascends up the steep slope left of Lower Peričnik. In a few steep turns we do those 50 meters of altitude. The path is well beaten and protected, but still narrow and requires some care. On the Swiss scale its difficulty would be rated T3. It is not recommended to go just to the place where water rushes off the cliff, that passage has considerable dangers!

The upper waterfall is immediately above the lower one. As it also falls over an overhanging conglomerate wall, you can go also behind it. Then you descend by the same path.

Peričnik waterfalls have most water in spring time, when snow is melting, and in autumn, after longer periods of rain. In summer, the climate in Julian Alps is more dry. As said, in addition to spring and autumn, the Lower Peričnik is very nice also in winter, after long cold periods. The path to the lower waterfall is still normally walkable, while you can not expect to go behind the ice curtain without winter climbing equipment. Also the ascent to the upper waterfall is in ice much more difficult (equipment!).