In Slovenian language č, š and ž are pronounced like ch, sh, and zh. Our mountain is written Vrtaško Sleme. 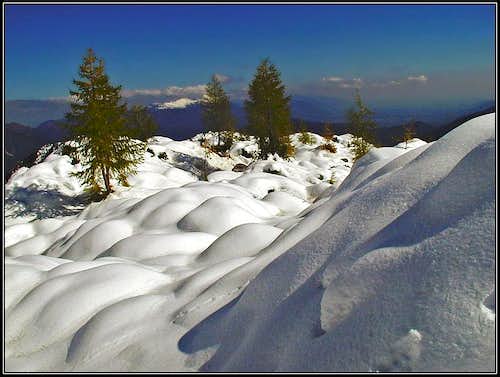 Whoever looks the beautiful and wild Martuljek group from the north, he will see only sharp, rocky mountains. The flat, grassy summit at the easternmost part remains neglected in this panorama. Also seen from the east, it looks as if Martuljek group finishes with the sharp cone of Kukova špica. The grassy summits of Vrtaško Sleme and Vrtaški vrh are hardly noticeable. And yet both are very rewarding hiking goals and ski tour goals.

Sleme is a common Slovenian mountain name. It means top of the roof, where two slopes join - so appropriate also for mountains. Indeed, when coming up from Njivice meadow, you will see exactly such a scene - a high, grassy edge, stretching between two almost equally high elevations.

Coming from Mojstrana, on the NE side of Martuljek group, the main crest rises first on the rocky Grančiše, 844 m. That rock, brushed by an ex glacier is guarding proudly the village (nice view down), but on the other side, the main crest is humble and overgrown with woods. Still, it rises persistently all the way up, until it reaches the panoramic summit of Vrtaški vrh, 1899 m. That means more than 1250 meters of altitude difference from Mojstrana. From Vrtaški vrh a gentle slope descends on Njivice meadow and on the other side rises again towards the summit of Sleme. This one consists of three almost equally high summits: Drobeče Sleme, 2029 m, on the north, Vrtaško Sleme, 2077 m, on the south and another, unimportant elevation (2076 m) more towards the SW.

If we continue towards the west, the main crest from Sleme goes towards Kukova špica, 2427 m. See its renewed page on SP! Before reaching it, it rises on a steep, rocky summit, named Vrh nad Mužiči, 2227 m. It requires some easy climbing (UIAA II, crumbly) to be ascended, as the whole east ridge on Kukova špica too. 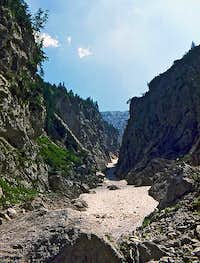 From Sleme towards the NE, a nice valley descends towards Sava river valley. It passes Vrtaški vrh on the northern side, then lowers on a terrace, where a hunters hut stands. The slopes towards Sava are then more steep, but the hunters path comes over them safely. This valley (and the whole route) is in good conditions a nice ski tour, for a summer ascent it is less popular.

Very wild is the northern side of Sleme. Except I guess a few hunters, perhaps nobody goes there. Steep, crumbly ridges and slopes are falling towards the valley of Sava, useless for any ascent.

Interesting is the north-western side of Sleme. From the end of the beautiful valley of Beli potok a long couloir comes up there. Actually, it's a deep ravine, in early summer filled with snow. It is called Macesnov graben, and from below you are strongly tempted to enter it and try the ascent on Sleme, which is rising just at the end of ravine. But the higher you come, the steeper and more crumbly the ravine gets. I tried it only once, and as I was alone and had no useful information (as I don't have it today), I had to turn back.

If the eastern side of Sleme is gentle, the southern one is more steep. There are some high rocks, falling down towards Vrata valley, but the slope still allows a hunters path to ascend and reach the Njivice meadow. That is a nice alternative approach to the eastern one. 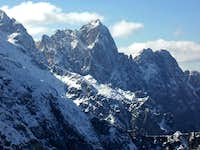 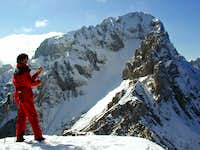 You reach Martuljek Group in Julian Alps by the valley of Sava river. To Jesenice you can get either from Ljubljana or from Austria through Karavanke tunnel. You can also reach the upper Sava valley from Austria (Villach) over Koren Pass or from Italy (Tarvisio).

For the ascents on Vrtaški vrh and Sleme almost the only starting point is Mojstrana, or the road from this village into Vrata valley. If you really attempt ascending Sleme directly from the valley of Sava river, so from the NE, then you start the tour in Podkluže hamlet, just west of Belca Village.

To reach Beli potok valley, we park by the main road in the valley of Sava, near the ex railroad bridge. The second option is Gozd Martuljek village. 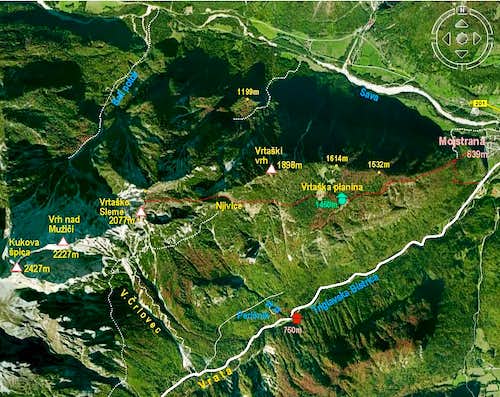 1. From Mojstrana. This is the usual, marked ascent on Sleme. You leave the road which goes from Mojstrana into Vrata valley near the last houses. There the marked path turns right and starts ascending the slope behind Grančiše. When you reach the main ridge behind its head, the path turns left and leads you directly up, towards the west. It strangely doesn't go in switchbacks, but more or less directly up. After some crossing of slopes you finally reach the nice Vrtaška planina (pasture), where a mountain hut stands. From the pasture the marked path continues righ up, on the upper meadow, where you can turn northwards, ascend Vrtaški vrh, descend on Njivice meadow and continue to the top. But if you decide to omit Vrtaški vrh, you continue by the marked path, which crosses its slopes until it reaches Njivice meadow. This is a nice place, worth of enjoying it, but most visitors go first on the nearby top of Sleme. The path continues towards the west, in a few switchbacks ascends the summit ridge and from there in a few minutes towards the left on the main summit. 3h 30min from the road.

2. From the south-west. Below the southern slopes of Martuljek group, a nice hunters path goes all the way from the end of Vrata valley (actually from Rdeči potok). But it is too long only for the ascent on Sleme. We can reach this path by another hunters path, which goes in thousands switchbacks up by the distinct ravine, called Črlovec. If you go (drive) by the road into Vrata valley, you pass Peričnik waterfall, then the road has a steep rise, called Kreda, after which it crosses the bottom screes of Črlovec. You can park there or above, on the meadow, called Tilešov rovt. Going up by Črlovec you soon hit the hunters path. It ascends the gravel only a little more, then it crosses it and continues over the rib on the other side. It's comfortable, but going in switchbacks straight up. In the upper part we see, that the rib divides two ravines. Veliki Črlovec is still on our left, while Mali Črlovec is now on the right. Below the rocks of Kukova špica we hit the crossing hunters path and follow it towards the right, over Mali Črlovec ravine. A few steep sections, then the path becomes more comfortable, crossing more and more towards the right. Above are the rocks of Sleme, so we first need to detour them, until we reach Njivice meadow. Then on top as described above. 3 h.

3. From the north. The tour starts in the valley of Sava, west of Belca village (Podkuže hamlet). We go over Sava river and find a good path going towards the south (left of Glava, 1199 m). Then in the lower part the path enters a ravine in the forrest, ascends by it, and above exits towards the left. Now the steepest part comes. In hard snow this passage can be tricky, but is short. When we were skiing down there, I remember we had to cross fallen logs, which were lying 'almost vertically' on those slopes. Today it's perhaps better. Above, close to the hunters hut you reach a terrace, from which you continue southwards. It depends on the thickness of snow how soon you will get out of dwarf-pines. Above, below the northern slopes of Vrtaški vrh, the slopes are opened, more steep (beware of avalanches), nice for skiing. The upper part forms a valley, which brings you directly up on Sleme. 3h 30min. A medium hard ski tour.

Just abopve the village of Mojstrana, there is a small hill of Grančišče, 844 m, polished in the past by the big Sava valley glacier. From the W side it can be easily reached by a path, but in the crags of its E face you can find two short, attractive ferratas. Aljaževa pot (Aljaž's Route) is easier, on the Austrian scale it is graded B. The other one is named Pot mojstranških veveric (The route of Mojstrana squirrels). It is a difficult, modern ferrata, graded C/D. 186 m of altitude difference, 1 hour for ascent. For safety reasons, don't use for the descent the easier of two ferratas, but go by the trail! 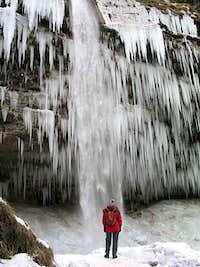 Sleme can be ascended all the year round, only in a very deep snow you should hold out. For the ski tour you will need safe conditions, because the slopes are oriented towards the north (avalanches).

On Vrtaška planina there is a hut, but is closed for public. Anyway all the tours on Sleme can be done in one day.