This ridge, that divides the South face of Matterhorn from the Pic Tyndall starting nearby the typical sequence of ”Enjambée” on Italian normal route, is probably the most mysterious ascent of the famous mountain guide Luigi Carrel.
Opened in the mid of II WW it was quite completely neglected by the specialised mountain press: “La Rivista del Club Alpino Italiano”, “Lo Scarpone” and also the popular newspaper “LA STAMPA”, famous for its mountaineering leading articles very appreciated during the Fascist dictatorship. The same Carrel hasn’t published any topo or report; we can find only a very short note by a journalist of “LA STAMPA” also quoted on the other review of Italian Alpine Club “Lo Scarpone”. It says that the rope party started to climb at 6,45 and joined the “Enjambée” at 17,20 after getting over 2 steps quite vertical and dangerous snow cornices on the last part of the ridge.

Luckily, thanks to the Matterhorn’s guides of second ascent, it’s possible to discover more details about this climb: except for 2 short sections fairly exposed to stone falls, there are some technical interesting sequences on good rock. The most difficult section (V and V+) is the upper one, where the ridge become razor edge; it’s necessary to take care of snow cornices near the end of the route, particularly at the beginning of the season or in winter.
The difference in level is about 1200 m from the base; like the other routes on South face of Matterhorn the ascent is recommended not too late in the season in order to reduce the objective dangers.

You can find here some useful informations for the access to Cervinia.

From Rifugio Duca degli Abruzzi all’Oriondè (m 2802) follow the track way marked to Plan Maison for about 30 minutes. Go up directly the moraines of (glacier) “Ghiacciaio del Cervino” on rubble slopes and after the same glacier (snow-fields, very rare crevasses) towards the vertical shoulder that comes from Pic Tyndall at the left angle of large south Wall of Matterhorn.
The attack point (altitude 3073 m) is on a forepart about 30-40 meters on the right of the avalanche cone in the gully falling from the vertical South wall of Pic Tyndall (2-2,30 hours).

Follow a ledge to the right and traverse on easy rocks a couloir well defined that divides from “Cresta De Amicis”. Continue on the ridge interrupted by the overhanging wall of “Cresta De Amicis”. Cross another couloir to the right (beware: stone falls) and join the knife edge that becomes more inclined up to a shoulder characterized for a dihedral closed by a roof. Turn it to the right (2 pegs in place) and gain again the ridge: here start the most interesting sequences. Climb an icy chimney that ends on a little runnel exposed to stone falls (altitude about 4000 m); here 2 possibilities:

a) First party route:
cross right the couloir (1 peg in place); the ridge increases its slope and continues on razor edge towards the “Enjambée”. A pitch not too difficult lets  to join a very smooth slab exposed to waterfall of melting snow.
Get over the slab on the right (V-, 2 pegs in place), then slightly to the left and climb in opposition an overhanging crack 4 meters high and about 30 centimetres of width that ends on a little terrace (V+, crux). Avoid an evident grey gendarme first on the right by smooth slabs (1 peg in place) then on the left up to its top.
The following section of ridge may be bordered of dangerous snowy cornices; in this case the progression becomes very dangerous and it’s necessary to move astride with less belay points. After a last step on easy rocks the ridge ends nearby the “Enjambee” on Italian Normal route of Matterhorn (9-11 hours).

b) Direct end to Pic Tyndall (Barmasse, Cazzanelli, De Tuoni, 1983):
without crossing the runnel, climb straight the upper wall towards Pic Tyndall’s summit with two pitches on compact and fine slabs (V, then IV+).
Get over the following overhang (IV+) and reach some steps spaced by rubble ledges; continue in oblique to the left joining “Cresta De Amicis” few meters before the top of Pic Tyndall (8-10 hours). 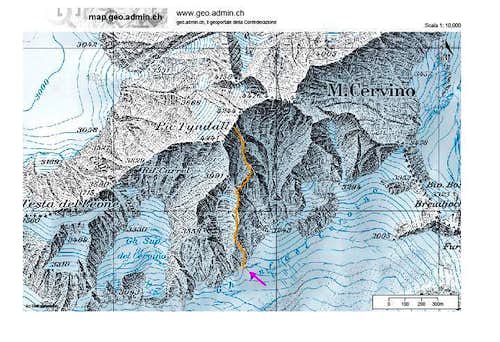 Descent: from Pic Tyndall by the Italian normal route equipped with many fixed ropes (possibility to sleep at Rifugio (Hut) Carrel - m 3848); about 3 hours to Rifugio Carrel and 5 hours to Rifugio Duca degli Abruzzi with good mountain conditions.
If you like to reach Matterhorn’s top after the “Enjambée” you have to evaluate 1,30-2 extra hours of double way climbing. 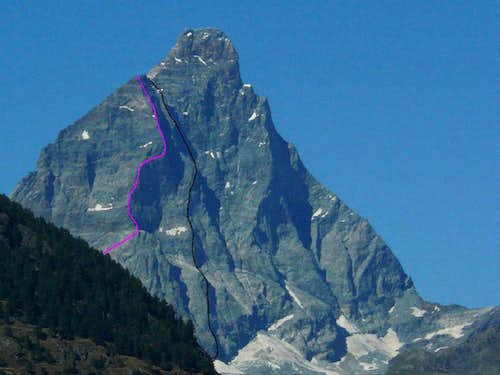 1 rope x 60 m, helmet, 5 pegs, a complete set of nuts (particularly medium and big size), 10 express clippers, 5 long tape slings.
Ice-axe and crampons may be useful during the approach and for the descent.