Because of its history, reputation, and visibility above Zermatt, the Hörnligrat is quite possibly one of the most famous mountain routes in the world. From most angles, the Hörnligrat appears as an elegant and very logical route to the summit of one of the most beautiful peaks on the planet. Certainly climbers and even non- climbers from all over the world travel to Switzerland each year to make the ascent. At AD- with pitches of III- and very sustained climbing of II over a climbing distance of some 1,700 m. (5,575 ft.) and a vertical rise of 1,200 m. (3,940 ft.) above the hut, the Hörnligrat is one of the most difficult "ordinary" routes on any of the Alpine 4000-meter peaks. In poor conditions, the climbing rapidly becomes a very difficult and dangerous proposition. Each year, many climbers whose ability is not totally up to the task underestimate the length and overall difficulty of this route. Numerous rescues, unplanned bivouacs, and deaths are the result. Over 500 persons have died on the Matterhorn. In good weather, during the main climbing season, the route will be crowded and there will be "traffic jams" in the fixed ropes. You will enjoy the climb much more if you go mentally prepared to share the mountain with others and take a relaxed attitude toward the situation. Edward Whymper, Charles Hudson, Robert D. Hadow, Lord Francis Douglas, Michel Auguste Croz, Peter Taugwalder Sr. & Peter Taugwalder Jr. (father and son) on 14 July 1865, made the first ascent of the Matterhorn via the Hörnligrat.

Most climbers will probably opt to take the lifts from Zermatt to Schwarzsee and follow the well marked and maintained trail from there to the hut / hotel. From Schwarzsee to the hut is about 700 meters of vertical and takes about two hours. If one chooses to climb from Zermatt, add another 950 meters and 3 hours to the time. Some groups camp or bivouac in the area near the hut or very low on the route. 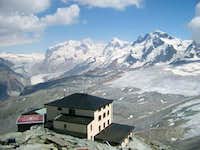 It is about 1,200 vertical meters with an estimated 1,700 meters of climbing from the Hörnli Hut to the summit. Except for the Moseley Slabs, which are III-, most of the climbing is II with some I. A certain amount of variation is possible, but generally when one gets off the main line a great deal of loose rock is encountered. There is enough traffic up and down that getting too far off route should not be an issue, but it does happen especially on the lower part of the route where some fairly long traverses are made on to the east face. From the Hörnli Hut one walks horizontally to the first step on the ridge. This is climbed upwards to the left, usually with a fixed rope or chain. From this step a traverse is made left to a small shoulder which is climbed a short ways before traversing left again on to the east face to the second couloir which is climbed for about 25 meters. Then on to the rib to the left, which is followed back to the ridge crest. The ridge crest is followed for about 100 meters before another detour on to the east face via a ledge in yellowish colored rock. From the end of the ledge, one climbs back to the ridge under a large tower where the remains of an old hut are located. From the rock tower, another swing onto the east face is made to a point more or less directly below the Solvay Hut. One then climbs steepening rock to the base of the famous Moseley Slab, which leads almost directly on to the "balcony" of the Solvay Hut. From the Solvay Hut, move left and climb the Upper Moseley Slab directly back to the ridge crest, which is then followed closely (turning any difficulties to the left) to the top of the Shoulder and the fixed ropes. Climb the fixed ropes or very near them and climb the final steep slopes from the top of the ropes to the summit. ESSENTIAL GEAR Ice axe, crampons, rope, and several slings & carabiners. A helmet is highly recommended.

The Solvay Hut is an emergency shelter located directly on the Hörnligrat at 4,003 meters (about 13,130 feet). It is described as accommodating 10 persons, but will hold more. It is supposed to be used only in true emergencies, but I suspect that it is very frequently misused. (SP Solvay Hut Page) An emergency shelter was first suggested in the late 1800s because of the great number of accidents occurring on the mountain. A primitive cable car system was built to the site and construction was finally started in August of 1915. It took just five days to complete the original shelter which was named for the wealthy Belgian industrialist Ernest Solvay who financed the project. The hut was rebuilt in 1966.

The picture topo link at the bottom is not working (or at least didn't for me).

The site was taken down - correction made. Thanks for the heads up.

No problem. Hoping to do that route within the next few years. Like your page on it a lot. I did find a pretty cool site here if you are interested: Bergsteigen.

A very nice page - I added it to the route page to replace the one that was taken down. I see two more places of fixed ropes than when I did the route - when I was there, there were only ropes on the initial pitch and the stretch above the shoulder. Thanks much. Fred

Hello, sorry for asking again... the link to the picture topo is broken; or more specifically it seems that the file at bergsteigen.at has been deleted. Could you maybe send it to me somehow? That would be really great. Thanks! Phil

Looks like it was deleted - I don't have a copy. I have removed the link. Sorry for the late response - I have just returned from a two week trip to Iceland.

As prices at Hornlihutte are prohibitive, do you know if there are places in the area where we can camp? In the hutte site they are mentioning that the camping and bivouacking is forbidden.

I doubt that there is any legal camping anywhere near the hut. I suggest that you contact the Zermatt tourist bureau. Also, you might post this question to the Europe board in the forums.

There is a bivy spot about 1000 feet below the hut, near the beginning of the iron stairway. It's built up nicely and hugs the base of the cliff. Comfy for 4-5 people.

In dry conditions, the technical climbing on the Hörnligrat is much easier than on the Upper Exum - two pitches of III- which is barely 5th class. However the climb is much longer and very sustained at 3rd and 4th class - most of it of the "if you fall you die" variety. On the upper part of the peak you will almost certainly find mixed snow and rock - crampons needed. The Hörnigrat is considered by most to be the most difficult "normal" route on any of the 4,000 m peaks in the Alps. Here is a good page for YDS / UIAA comparisons - with written descriptions of many grades. http://www.summitpost.org/handy-alpine-grade-facts/173430

If it is helpful, Fred and I took almost 13 hours round trip on this route and we had top notch conditions. We do not know how conditions have changed since the landslide that took place on the lower Hörnligrat.