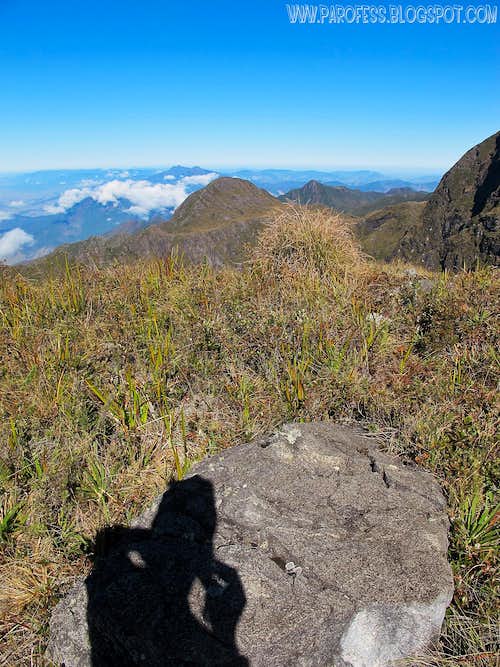 Mina Rock shadow over the peak!
Morro do Avião (or Plane Peak, or Plane Crash Peak)is a great rocky mountain directly southeast of Pedra da Mina Peak in Serra Fina, Brazil. Forgotten by the brazilian mountaineering community, hardly you hear someone say that reached its summit, but people do go there and the reason is obvious, there is a crash site close to the summit. In the late 90's a plane crashed and since it is a difficult spot to reach, the plane still there. The brazilian authority responsible for the mountains registry, IBGE, does not list that mountain as a brazilian summit. I disagree with that since there is a valley 200m deep between Pedra da Mina and that mountain, plus, the mountain itself has at least 3 secondary lower summits. With google earth i found an altitude of 2.650m but, since i always find a difference of around 30 to 40 meters higher at the mountain, i think that could be a 2.700m peak, soon i'll reach it and measure with a few friends and at least 3 gps atop the mountain. The altitude at the mountain page is a guess, to be corrected as soon as I step on its summit.

That mountain is one of several summits of Serra Fina range, but at this place, most of the mountains not even have a name for it, including this one, me and Tacio came up with the name. I saw and photographed myself at least ten different summits worthy of an name. In fact, i am setting up some data to sugest to IBGE this mountain as a new brazilian summit, which can be 9th highest brazilian peak if my guess is right. But the only ones with a name and the proper registry are:

The mountain and the crash site. 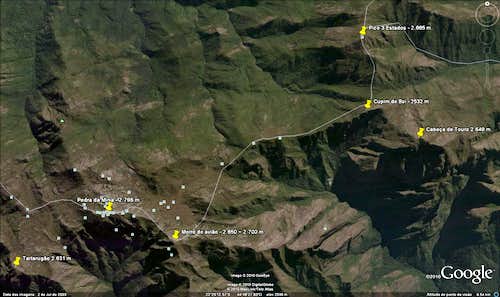 There is 3 possible ways to get to that mountain, and for each one of them, first of all, you have to manage your way to a little city of Minas Gerais called Passa Quatro. From there, get yourself a private transport to one of the spots in red, depending of your choice:

First: SPOT: TOCA DO LOBO FARM: Starting the Serra Fina traverse from the west side. First summit: Alto do Campim Amarelo (1 night), after that Morro do Melano and Pedra da Mina summit (1 night). Start from there.

Second: SPOT: SITIO DO PIERRE: Starting from the Serra Fina traverse from the northeast side route. First summit: Pico dos 3 estados (1 night), second summit: Cupim do boi, third summit: Pedra da Mina (1 night) and go from there in the next morning. Maybe you can sleep at Ruah valley to save some time, at thebase o the mountain.

Third: SPOT: SERRA FINA FARM: Starting from Serra Fina Farm, hike up to Pedra da Mina by the north side, 1 night. Go from there.

Take your garbage with you!!!
Be careful, Serra Fina has a well known problem with water, find a gps archive to get the water spots, you don't wanna run out! During day time it is hot, but at the night, winter time, it can drop to -13°C. Cold!
If you go down a little bit on the opposite side of the summit you'll find the plane. 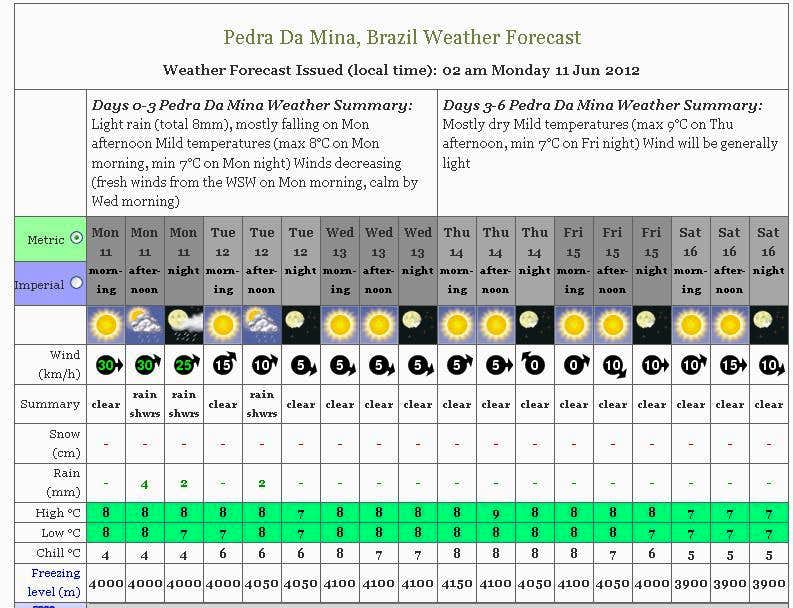